Imitation often arrives alongside a string of unflattering assumptions. Is this a knock-off? An attempt to create something that looks and feels like this other thing without bringing anything new to the table. Prior to its release, if you caught wind of developer Spiders latest fantasy role-playing adventure Greedfall, you probably noticed that it has a certain air about it. Specifically, the aroma of a mid-to-late 2000s BioWare release.

Where story, player choice, and deep role-playing mechanics converge into the sort of memorable experience one remembers long after the controller is put down. Or, hands raised from an already stationary keyboard. 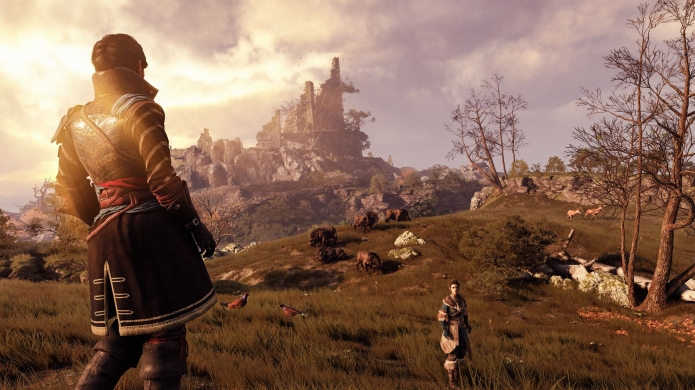 Dragon Age by the way of a colonial setting, reminiscent of that Assassin’s Creed game where you became a pirate. A sentiment that certainly rings true in all that is Greedfall. In an almost literal sense. This is more Dragon Age than Assassin’s Creed – there’s an emphasis placed on world building and setting up the stakes versus spectacle or grandiose action sequences.

Like a dramatic slow burn, the explosive stuff arrives much later, bringing with it the full weight of several hours of increased curiosity. Curiosity that then simmers into unbearable tension.

Looking back at BioWare’s fantasy role-player, 2009’s Dragon Age: Origins, there was satisfaction in simply learning more about Mages and how magic itself was heavily controlled and supressed by the Chantry. A state of affairs that arguably brought peace to the majority of Thedas. Thanks to BioWare’s renown for storytelling and characterisation this then led to dramatic and often emotional tales that players took an active role in. Or, simply passed through on their way to something seemingly more important.

Greedfall invokes a similar feeling, and early on establishes that nothing is what it seems. Black and white merely a concept. In the world it presents those who take to the seas, managing exploration and trade are known as the Nauts. Tattooed sailors dressed up in the sort of garb that blends the formal and frilly with the workmanlike. For centuries the Nauts have struck a deal with various nations and regions, anyone born at sea belongs to them. Conscripted to work hard and maybe one-day make Captain or Admiral.

“Like a dramatic slow burn, the explosive stuff arrives much later, bringing with it the full weight of several hours of increased curiosity. Curiosity that then simmers into unbearable tension.”


Beginning in the coastal city of Serene, before you can depart for the New World your ship’s Captain advises that one of his crewmembers is missing and asks you find him before departure. Asking around you discover that he drinks and gambles at the local tavern. Investigating further and you begin to suspect trouble. Digging a little deeper, through stealth and conversation, you find out that his parents have kidnapped the sailor to retrieve their son from the clutches of the Nauts. Long rumoured to conscript people and abduct children against their will. 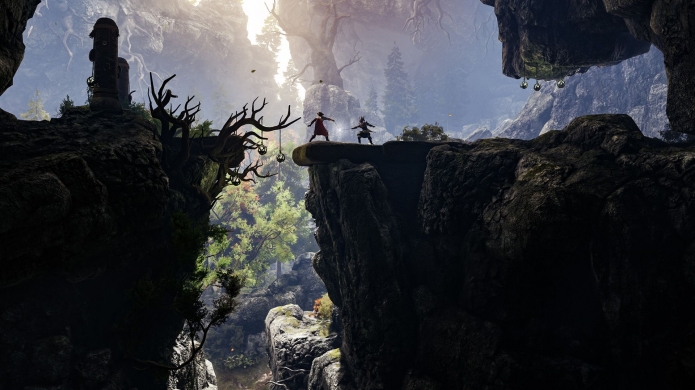 Further investigation then leads to new information and understanding, deals made between the Nauts and individuals, those looking to expand their wealth or potential business prospects. Anything is possible, and the Nauts continue to thrive and grow in number. At the conclusion of this little tale you discover that the father sold his son in exchange for success, without his wife’s knowledge. Under the assumption that it was a rescue, you then have the choice to return the sailor to the Nauts with whom he has spent most of his life. Or, let the parents keep him under duress breaking a contract in the process.

The choice here may be simple, let the individual in question decide – but this opens the door to Greedfall’s greatest and well realised aspect. That is how choice and consequence play into both the stories being told and the actions you can take along the way. In Greedfall if you can’t convince someone with Charisma or Intuition, break into a locked room or chest to get the leverage or information you need. Do them a favour first, give before you take. Or simply, take. In the example above if you decide, after learning the sailor’s location but not the true story behind his abduction, to retrieve him with action. Because, hey, it’s time to sail. Well, that leads to blood being spilt.

Whether it’s the Nauts, the mercenaries for hire Coin Guard, the religious servants of the light of Theleme, the Congregation of Merchants, the all-in-the-name of scientific progress Bridge Alliance, the native islanders and clans of Teer Fradee – keeping everyone happy is all but impossible. Atrocities and crime run rampant no matter where you look, and in a way playing diplomatic detective in Greedfall presents a story about striking a balance in all things. All options are on the table and how you feel about a situation will drive the outcome.

“In Greedfall if you can’t convince someone with Charisma or Intuition, break into a locked room or chest to get the leverage or information you need. Do them a favour first, give before you take. Or simply, take.”


In terms of shaping the narrative, Greedfall is pure role-playing. With some of the best quest design and storytelling this side of The Witcher. The larger themes do take time to emerge though, and for a sizable portion of the adventure there’s no singular villain or time-sensitive threat looming like a cloud. Taking on the role of De Sardet, your mission is to try and find a cure for a mysterious and ghastly illness called the Malichor that is plaguing your people. Arriving at Teer Fradee is akin to an awakening, seeing firsthand natives being exploited by colonialism, religious tension and fanaticism, and conflict. The backdrop a gorgeous island full of people, life, and history. And magic, giant beasts, and strange unknown forces. 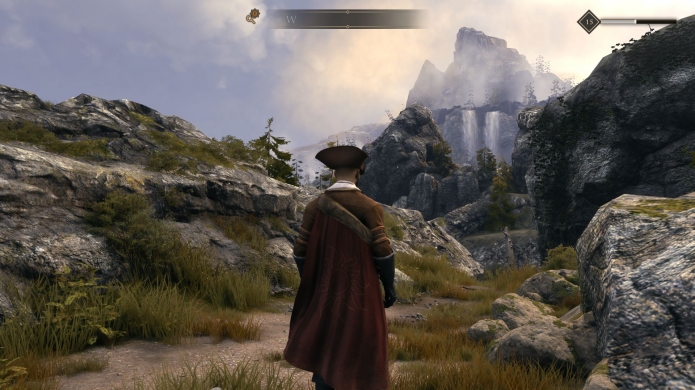 That all of this comes from a relatively small development team is impressive, though this fact does make itself readily apparent the more you explore the world. Visually, Greedfall’s environments strike the right balance between the familiar and the fantastical and are often breathtaking. That said, there’s repetition almost everywhere you look. Certain buildings look identical no matter the town or port, and in the case of Governor mansions different exteriors with identical interiors. Native abodes look the same too, with only varying face-paint on those walking around and markings on some walls there to differentiate clans. Character models range in quality, from good to serviceable to last-gen.

This is a list that could extend for several more paragraphs, but in the case of Greedfall it often feels like nit-picking. No matter the shortcuts taken, Greedfall’s narrative and role-playing ambition shines through. What you get is so good, you’ll feel bad about listing something like janky climbing animation. It’s not open-world ala The Witcher or Skyrim, nor does it claim to be. By invoking the feel of a style of game from over a decade ago, Greedfall’s overall design is AAA by the way of 2009. An experience where relationships carry weight, intrinsically linked to bonds formed over time. The flipside to this, disagreements can lead to outright conflict with party members that join you abandoning your cause should you choose a certain path.

Combat feel is akin to The Witcher, fast paced with the ability to pause and use potions or apply some sort of alchemical edge to an already sharpened blade. As an RPG taking on the role of either a male of female De Sardet, the customisation across weapon styles, abilities, talents and traits is commendable. Wielding both magic and one-handed cutlass style melee weapons is possible, guns and large two-handed maces that wouldn’t look out of place in a Japanese-developed RPG too. Blocking and dodging, timing hits, and using all the tools available. Simple at first, but much like the underlying story Greedfall’s combat comes alive once skill trees begin to fill up.

“Greedfall is pure role-playing. With some of the best quest design and storytelling this side of The Witcher.”


Keeping it simple across spells, melee attacks, potions, and even things like traps and bombs is a design choice that compliments the fast-paced action. The downside is that the pause-and-issue-commands stuff is more of a homage to Dragon Age than a necessary combat tool. And magic, as a weapon, feels undercooked with only a handful of spells and two main attacks – a projectile and a close-range Batman-style dash in and hit.

In the end, the genius of Greedfall comes down to the story being told, the characters you meet, and the journey itself exceeding any and all design limitations. How choice extends beyond binary outcomes and informs how you engage with the world, be it through combat or picking sides in a dispute. With fascinating lore you’ll want to discover more about any given situation and the history of both Teer Fradee and the various factions. Ultimately, how the world itself becomes the focal point of Greedfall’s narrative - in a way we rarely see - leads to a truly stunning finale full of heart, optimism, criticism, tragedy, and warmth. An RPG to savour, Greedfall’s tale verges on the profound.
Latest Comments
No comments currently exist. Be the first to comment!
Commenting has been locked for this item.
Follow Us
Latest Reviews
More...
News Feed
Advertisement
Latest Threads
Log In
Create Account | Lost your password?