(Please note, this review was written from a PS4 review build of the game, we're currently updating our "Platform Reviewed" tags - Ed.)

As a fan of the Assassin’s Creed series from the problematic but potential-ridden series opener, it’s been a rollercoaster ride of triumphs and tragedies as the franchise has progressed. Assassin’s Creed II improved upon the samey gameplay of the original, but the series stuck with protagonist Ezio for another few games and started to dip in quality. While fellow AusGamers critic Naren loved the hell out of the last entry, Assassin’s Creed III, that was the game that solidified my disillusionment with the franchise. For the record, Naren and I had some pretty spectacular yelling matches about our respective stances.

So, despite my affection for pirates (anyone else remember Sea Dogs?) and my hopes that this franchise I once loved could right itself, I went into Assassin’s Creed IV Black Flag with seriously curbed expectations. But what a blast it turned out to be.

You play as Edward Kenway, a Welsh privateer-turned-pirate whose simple needs revolve around the pursuit of personal fortune. Instead of starting off with backstory or games of hide-and-go-seek, Black Flag throws you right into the thick of an explosive sea battle. A couple of on-screen prompts remind you of the basics of combat and movement before you’re slashing away at landlubbers that are trying to take your ship. Awesome. 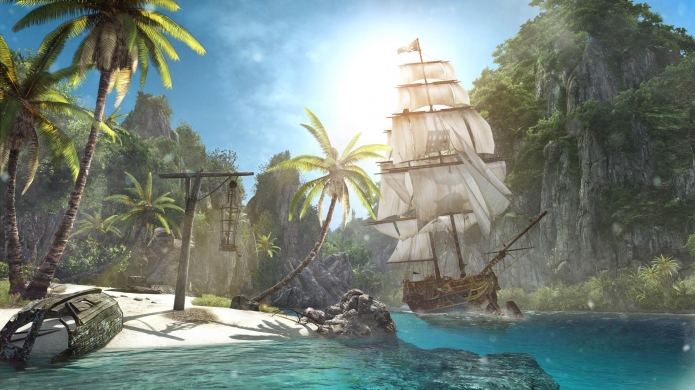 As it stands, to talk too much more about the narrative would ruin the overall satisfaction of a story arch that has neat twists right from the opening scene and persists throughout the game. Suffice it to say, Kenway effortlessly establishes himself as the best leading man in an Assassin’s Creed game, as his selfish goals are tempered by an increasingly compelling backstory that’s simple yet effective at offering believable depth to his motivations. The supporting cast also fares quite well in terms of three-dimensional characterisation, which makes for some emotionally impactful dramatic beats as the story unfolds.

The future elements, unfortunately, don’t fare as well. Yes, they’re back, and with a different character to play as, but they feel incredibly disconnected from the main storyline, and not just because of the jarring first-person presentation. Ubisoft deserves kudos for taking these future sections less seriously, with some funny tongue-in-cheek moments, but they still feel more intrusive than inclusive, and disrupt Kenway’s far more interesting plight. Outside of being told to walk between various objectives, there’s some disjointed puzzling that takes place in the sci-fi sections, too. Thankfully they don’t outstay their welcome and last no longer than 5-10 minutes.

At around 13-hours long, the main campaign is well worth playing through from start to finish, but you’ll be hard pressed to ignore the plethora of piratey distractions off the beaten sea-path. Whether you’re rolling on the ocean or free-running on the sand, Ubisoft Montreal seems to have made it its mission to throw as many temptations as possible at you to lure you away from whatever you were hell bent on achieving. There’s a range of side missions on land, properties to buy or upgrade, bar brawls to be had, and random Englishman to assassinate. Even chasing collectables has more meaning this time around, particularly with the inclusion of musical sheets that add new morale-boosting tunes to your crew’s repertoire that they sing whenever you’re taking the Jackdaw out for a spin.

The Jackdaw is the name of Kenway’s ship, and you’ll soon learn to love it as much as he does, despite the fact he named it after a less-than-intimidating bird (something he cops flak for from his pirate chums). Hard-earned or blatantly stolen booty can be used to upgrade many aspects of the look of the Jackdaw, but you’d be mad to visually customise before you’ve turned it into a fully armed and operational vessel that can hold its own against hostile fleets or Man o’ War ships. You can bolster the defences, up the number of cannons associated with your deadly broadsides, add a crippling ram, and/or bolt on deadly additions such as front-firing mortars or rear-facing fire barrels. 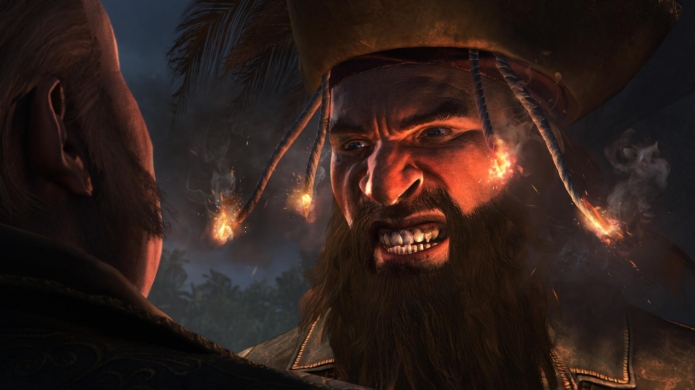 A handy spyglass lets you appraise potential enemy combatants, with an at-a-glance red rank rating often determining the wisdom of whether you should open fire on a better ship in open waters. Of course, just because they’re a higher rank, doesn’t mean you can’t take them down if you introduce some good ol’ fashioned strategy into the mix. Ship battles play out at their best when you’re taking on tougher odds and/or greater numbers and, in turn, the rewards are usually sweeter. Damaging a ship enough makes it vulnerable to boarding, but you can just as quickly choose to scuttle a sinking tub to quickly secure half of its cargo.

A successful boarding grants full access to cargo-claiming rights, but can also be used as a bit of a cheat if you board a ship in the middle of a battle. The other ships rather kindly back off and wait until you’re finished boarding before reengaging you in combat. Considering that a successful boarding affords three options—repair the Jackdaw, spare the crew to lower your wanted level, or send the ship back to Kenway’s fleet—it’s an easy way to avoid Davy Jones’ Locker if you find yourself cannon-ball-punching above your weight, or if you drift too close to a hostile fortress that have a tendency of sinking the Jackdaw within moments.

Seafaring distractions aren’t merely limited to aggressive options, either. You can jump into a longboat and hunt a variety of big fish with your trusty harpoon. As you might imagine, these sea creatures don’t take too kindly to being harpooned, and these events can quickly descend into a fight for your life as the ocean-dwellers take the fight back to you. Black Flag has borrowed the crafting system from Far Cry 3, as besting sea creatures or killing animals on land rewards the player with a variety of skins that can be used to improve Kenway’s armour, ammunition pouches and the number of straps he has for carrying flintlock pistols.

Hunting treasure on land is complemented by exploring underwater wrecks that can reap piles of plunder once you’ve purchased a diving bell for the Jackdaw. Underwater air pockets and barrels help keep Kenway’s lungs full, and there are also underwater threats, including sharks whose hungry gaze must be broken by hiding in patches of seaweed.

As far as visual fidelity goes, it’s damn impressive on the PlayStation 4 for next-gen early adopters wondering whether a current-gen upgrade purchase is worth the dosh, or for those searching for a great example of eye candy in a third-party next-gen title. Better still, it’s also a practical inclusion in more ways than just enhancing immersion, such as in stealth sections where stalking prey through vegetation makes for seamless Kenway tracking as he shifts through the flora. The sound design is also incredibly immersive, and the voice acting is top notch.

It’s a damn shame that some of the longstanding detractors of the Assassin’s Creed series rear their ugly heads again in Black Flag. Enemies still insist on attacking one at a time, but this con is somewhat countered by the inclusion of a variety of enemy types that force you to switch between offensive and defensive tactics. Hard-fail stealth missions are still a thing and they’re made even more frustrating by the fact that the free-running system still tends to sporadically glitch out at the most inconvenient times, sending you back to the last checkpoint after Kenway decides you wanted him to jump off a roof, instead of mantle to the next level. Sigh.

The greatest compliment I can afford Black Flag, though, is that I wanted more at the end of my time with it. With such an expansive map to explore and so many alluring distractions on offer, this is the kind of game a player could easily lose scores of hours exploring. I didn’t get to take the multiplayer for a spin, but the solo experience has enough on offer to ensure engagement long after the credits roll on the main quest.