Valve’s Portal made its debut back in 2007, most notably as part of The Orange Box collection that included Half-Life 2, two expansion Episodes, and Team Fortress 2. As per our review from back in the day, that line-up alone warranted the 10/10 score we gave the package. And then some.

But even so, sitting there alongside one of the best first-person shooter campaigns of all time, and one of the best multiplayer team shooters, period, Portal stood tall. A first-person puzzler with a distinctly dry sense of humour and a mind-bending premise that put a portal gun in your hands. Essentially you shoot and place up to two portals on specific surfaces, one an entry and another an exit, and use that mechanic to solve puzzle rooms and make your way to the exit.

Bending time and space in this way leads to solutions that stretch the physical world to its breaking point - and in the process helped create one of the most iconic games of the decade in which it was released. And an experience that still resonates today.

In many ways, you could view NVIDIA Lightspeed Studios’ Portal with RTX as a special or definitive edition of the game, a free mod that replaces all lighting with real-time ray tracing. A fully path-traced overhaul akin to the studio’s impressive efforts with Quake II RTX, with the added bonus of improved textures and more detailed models.

In many ways, you could view NVIDIA Lightspeed Studios’ Portal with RTX as a special or definitive edition of the game, a free mod that replaces all lighting with real-time ray tracing.


And like the Quake II overhaul it transforms Portal into a cutting-edge visual showcase for the sort of technology that would make Aperture Science and GLaDOS proud. Ray-tracing as we know it today, as seen in games like Marvel’s Spider-Man Remastered, Cyberpunk 2077, Dying Light 2, and more recently with The Callisto Protocol, is more of an “added bonus”. A way in which to add a touch of realism to things like reflections, shadows, and other light-based effects.

Of course, you’ll need a GeForce RTX 30 Series or 40 series GPU to play Portal with RTX as intended - with some DLSS magic of course. With a GeForce RTX 4090 and the added bonus of DLSS 3’s Frame Generation, you can push the resolution to 4K with a frame-rate well above 60 fps. A massive step up from how we experienced Portal back in the day on a PC or Xbox 360. 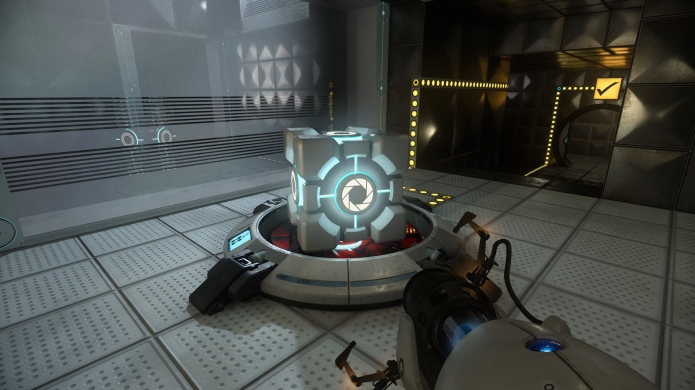 Portal with RTX is a great example of what DLSS 3 brings to the table too, from NVIDIA Reflex’s latency reduction to AI-powered Super Resolution and Frame Generation. It’s all incredibly smooth, crisp, and detailed. Portal with RTX has the look of a major 2022 release, and the clinical nature of the Aperture Science Enrichment Center has never looked so good.


Portal with RTX is packed with the latest in real-time ray tracing effects. According to NVIDIA the light calculations alone, compared to both Quake II RTX and Minecraft RTX, have been ramped up by a factor of 4X. And new technologies allow for smarter and more detailed global illumination methods and other ray-traced effects.

The other half of the equation is the addition of physically-based rendering for multiple objects seen throughout the environment, adding a lived-in tactile feel to what was previously a somewhat simple presentation. You can see scratches and scuff marks and rivets and other little details, and best of all the balance between the clinical and simple nature of Portal’s lab isn’t hurt in the process. You can still easily tell what surfaces the portal gun can interact with and where exactly to place portals, a testament to the original design.

This is a loving recreation and doubles as a proof of concept of sorts to the modding capabilities of RTX Remix, an automated tool that is just about as sci-fi as the portal gun in the game. Add ray-tracing to any game, powered by AI, hardware, and software. Used in conjunction with traditional development for things like new textures and models, the result is a remake that’s not really a remake created by a small team.

The timing for this release is perfect, at least for me. I hadn’t played Portal since The Orange Box was fresh on the scene and just about permanently slotted into the DVD drive of my Xbox 360. Plus, NVIDIA was kind enough to supply review units for both the GeForce RTX 4090 and GeForce RTX 4080 and the announcement from earlier this year was one of those classic “I definitely want to play this again” moments.

This is a loving recreation and doubles as a proof of concept of sorts to the modding capabilities of RTX Remix, an automated tool that is just about as sci-fi as the portal gun in the game.


No doubt Portal in 2022 is very different from Portal in 2007, in ways that go beyond the stunning fully ray-traced visuals. Since Valve’s iconic puzzle game hit the scene we’ve seen its influence pop up just about everywhere. If you’ve been playing games pre-Portal and post-Portal, outside of the advanced post-game content it’s a relatively straightforward run.

Thinking in the fourth, fifth, or tenth dimension is something we’ve seen evolve as part of the games we play. Portal thinking is a tool gamers draw on as much as anything else.

It’s still a relatively short game, about three hours or so if you’ve got your Portal brain switched on - but still a remarkable experience. The puzzle rooms and pacing toward the big GLaDOS reveal, and iconic end and credits sequence is still spot on. Portal is as finely tuned, deep, and fun as ever. Case in point, after firing it up I couldn’t stop until the epic “last room” was cleared. As a visual showcase of what a remaster meets remake can be, as a re-release of sorts, and as a reminder that classic design and pacing will always be just that, Portal with RTX is a triumph. Now bring on Portal 2 with RTX, and maybe some Half-Life 2 with RTX whilst the Source engine is still fired up inside NVIDIA’s labs.
Latest Comments
No comments currently exist. Be the first to comment!
You must be logged in to post a comment. Log in now!
Follow Us
Latest Reviews
More...
News Feed
Advertisement
Latest Threads
Log In
Create Account | Lost your password?