Too many games for PSVR are wonky, uglier facsimiles of better experiences. VR enthusiasts like myself can count on one questionably-tracked hand the number of times we’ve been impressed by an inventive mechanic. To put it in the more recognisable Simpsons nomenclature: Most VR experiences make me feel like a street urchin who's ditched a perfectly good tree branch to go drool at Stick Ball: The Arcade Game.

But, allow me to take a tip from today's hack-tastic subject matter and break my own logic. If you are pining to play something new and clever in VR, you really ought to make time for Pixel Ripped 1995. A retro-obsessed ditty that revels in crusty old games and their creaky old mechanics. 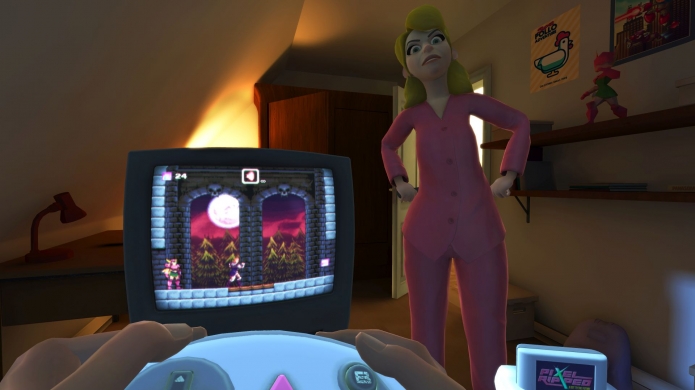 In this love-letter to the decade we call the ‘90s you'll be donning the (totally-not-Samus's) armour of Dot, a sentient 16-bit heroine. Her chiptune-scored world has been turned upside down by the evil Cyblin Lord, a jerk out to ruin not just her pixelated plane of existence - but also the real-world, where the nine-year old boy controlling her resides. And this being VR, add another layer on top of that as you become said lad. Amidst this weird, multi-dimensional crisis is where Pixel Ripped 1995 breaks out its most blast-processed concepts.

“Amidst this weird, multi-dimensional crisis is where Pixel Ripped 1995 breaks out its most blast-processed concepts.”


Basically, the DualShock 4 in your hands become the virtual stubs and digits gripping the SNES-like pad of your “player”. Planted on the virtual floor with a shitty CRT TV in front of you, you're essentially asked to play a series of games within the game. Sometimes it'll be a top-down RPG that reeks of Zelda influences. Other times it’s side-scrolling, or even bouts of leaping and blasting space mutants and skeletons. The section where Dot morphs into a wannabe Blaze Fielding for some good ol' fashioned street raging feels especially topical. Virtual side bar: Streets of Rage 4 is awesome, and you should go buy it. 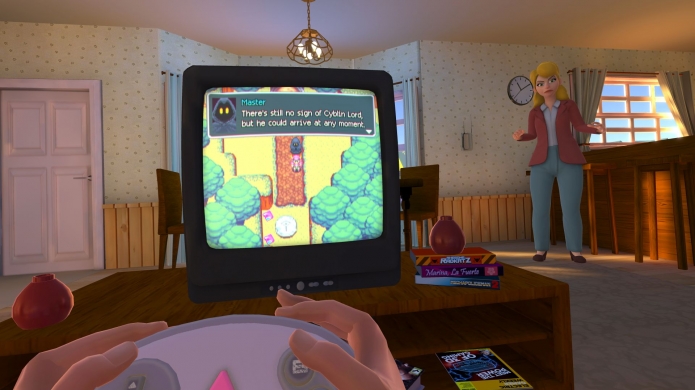 To make life extra tricky, your gaming sessions are under constant threat of being shut down by mum. That sort of plate-spinning might sound annoying, but it's an entertaining challenge. And for those of us that grew up in the days of parachute pants, it’s one that hits, very literally, close to home. Here, virtual mum needs to be distracted from her anti-gaming rants or she'll trot over and yank out a cable. Later, Cyblin Lord's goons will manifest on the periphery of your “game screen” to cause trouble. Solving both nuisance types is done by pulling a trigger button to shift your virtual grip over to your trusty pop gun. Nailing breakable objects in your surrounding environment will earn you breathers for more gaming time.

Speaking of nostalgia, developer Arvore dispenses the most potent and concentrated Memberberry Juice imaginable whenever your environments swap to a new locale. Visiting a dank, neon-soaked arcade was always going to be a given, but the devs go above and beyond by casting you as a virtual Fred Savage in a points-a-thon tournament not unlike The Wizard. Having the ability to gain a competitive edge by plugging your opponents in the face with Ping Pong balls, well, that’s awesome. Like Lucas. 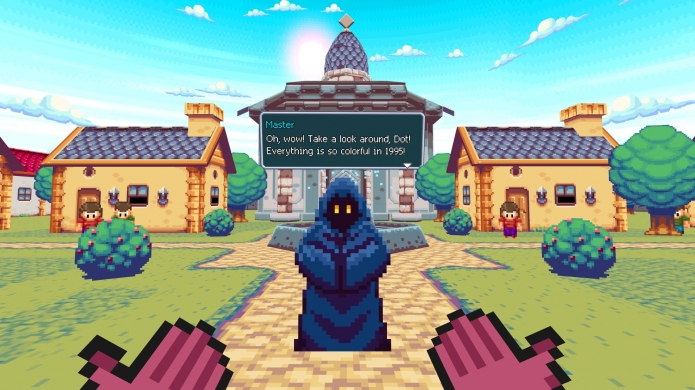 Pixel Ripped 1995 delights further when your cartridge swaps to a faux-Castlevania, right as you're plonked into your bedroom during a midnight thunderstorm. By this stage Dot has recruited an amusingly vain, overconfident vampire hunter as a tag along sidekick. “In-game” missteps, like walking on crappy floorboards, shooting bells or allowing your ally to shriek at his own reflection in a mirror will mobilise the maternal authority figure. Having to juggle pixel-perfect platforming with the physical act of snatching up and clicking the telly off with a remote is more entertaining than it has any right to be.

“Visiting a dank, neon-soaked arcade was always going to be a given, but the devs go above and beyond by casting you as a virtual Fred Savage in a points-a-thon tournament not unlike The Wizard.”


It's also hard not to be impressed by a cool gimmick that crops up in the Video Store scenario. In order to school your mouthy neighbourhood rival, you and Dot dip in and out of two vastly different demo display consoles. Here scooping up one controller allows the Dot avatar to take weapons and abilities from one title into the other. It's such a neat idea you wish there were more like it.

Sadly, that line could double as a review for the game. A bunch of brilliant ideas that, frankly, aren't allowed to bloom within the four-hour runtime. By the time Pixel Ripped 1995 starts to shine, when the challenging augmented-reality-within-a-reality moments manifest, the end credits aren't far behind. Five chapters and that's all she wrote. And there's little reason to go back. 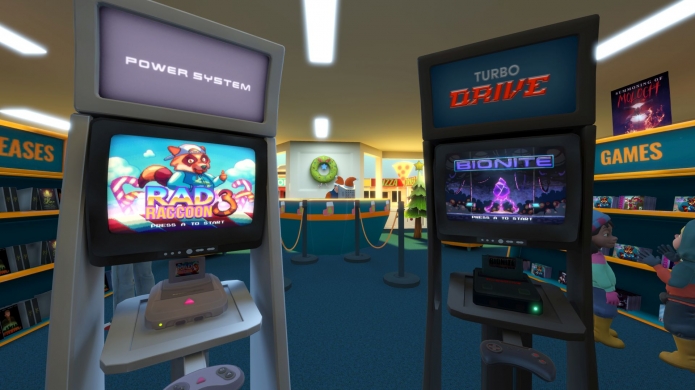 Speaking of refinement, the faux games could have done with a bit more polish. Giving a big wink to fans of Sonic the Hedgehog, Road Rash, Crash Bandicoot, and the like is great, but Dot never evolves beyond the ability to shoot, jump, and charge up a power-shot. Without true-to-article mechanics a few of these homages feel too simplistic, with the challenge residing mostly in the dimensional-juggling. A fact that will no doubt disappoint Pixel Ripped 1995’s ideal target audience – hardened vets from the era depicted.

There are a few non-16-bit rough edges too. I encountered a bunch of sound bugs that abruptly cut some parental dialogue. However, I welcomed some of those interruptions thanks to the devs leaning a little too heavily into “duh-duh” dorky parenthood shtick. I'd also be remiss if I didn't mention a few isolated deaths caused by less-than-optimal hand tracking – such is the way with a lot of VR. Re-attaching your mitt to your controller (after busting caps in people) needs to be made a bit surer.

Beyond those isolated and minor hiccups, Ripped Pixel 1995 is a rare gem in the PSVR library. It's got a few clever ideas, unique mechanics, and the execution is mostly on point. Throw in some weapons grade VHS-era nostalgia with a decent array of spot-the-classic clones, and you've got a cartridge worth slotting into your Control Deck. With a few more dust dislodging blows though, we could have had a must-buy.
Latest Comments
No comments currently exist. Be the first to comment!
Commenting has been locked for this item.
Follow Us
Latest Reviews
More...
News Feed
Advertisement
Latest Threads
Log In
Create Account | Lost your password?