House and techno music came into its own in the 1990s, especially during the latter parts of the decade where club, rave, and dance scenes took off. During the late ‘80s and the earlier parts of the decade though, this style of electronic music was relatively unknown. Born from the annals of disco, funk, and soul - house and techno lived well and truly in the underground. With the original Streets of Rage, released in 1991 for the Sega Mega Drive, composers Yuzo Koshiro and Motohiro Kawashima looked to the emergence of house and techno in Japan and felt like the time was right to bring these styles of music to the console space.

The result was immediate, catchy, groovy, and the perfect backdrop for a beat-em up akin to Capcom’s Final Fight or Taito’s Double Dragon. The urban setting of Streets of Rage paired beautifully with the soundtrack, creating a memorable multiplayer experience that has seen the series and its music live on for decades.

Streets of Rage 4 arrives on the scene 16 years after the third outing and is as much a celebration of the spirit and feel of the original as it is a numbered continuation in a long-running series. As an added and welcome bonus, developers Dotemu, Lizardcube, and Guard Crush Games have seen fit to offer the option to play through the entire game using music ripped from the original Mega Drive soundtrack. Proving that the series’ music has aged better than any bottled grape juice, whilst re-affirming that there’s still room for a solid beat-em up in today’s crowded market.

“Streets of Rage 4 arrives on the scene 16 years after the third outing and is as much a celebration of the spirit and feel of the original as it is a numbered continuation in a long-running series.”


The beat-em or brawler genre is a style of game that one normally associates with the rise of the arcade. That time and place in the ‘80s and ‘90s that many found themselves gravitating toward after filling their pockets with change. Before the emergence of Street Fighter and other pure fighting games the beat-em up was the go-to experience for punching and kicking and smashing phone booths to find digitally roasted chicken. Multiplayer was co-operative and beating up waves of enemies and bosses required high levels of dexterity, timing, and old-fashioned luck.

As a 16-bit home console series Streets of Rage bucked the going trend of random and unfair difficulty spikes seemingly inserted, well, for players to insert more coins. The focus was on fun and challenging combat in a package that oozed style. It is worth noting that Streets of Rage 4 is not merely a product of pure nostalgia, the art-style is hand-drawn, detailed, and animated with an exceptional level of detail. The sort of stuff that would not only make a 16-bit gamer’s jaw drop – but a modern 8192-bit gamer’s too.

Where Streets of Rage 4 remains almost completely faithful is with the simple approach to controls and combat. You move, you hit, you jump, and every now and then pull off a special attack. No blocking means coming to terms with the somewhat slow beat-em up character movement and trying not to be in the wrong place at the wrong time. At first the simplicity comes off as a little shallow but hidden in there, much like with many beat-em up classics, is nuance and little touches that add flavour. 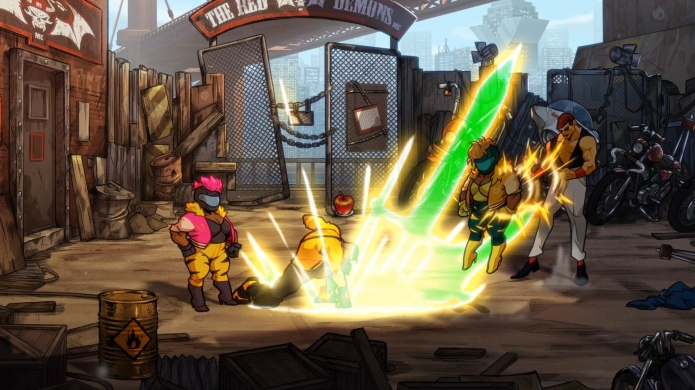 Being able to throw a weapon at an enemy to then catch the mid-air ricochet and throw it right back is worth the cost of entry alone. Learning enemy movements and being able to read and react in real-time points to the versatility of the genre and why there were so many of these made back in the day. The animation and art-style sits alongside the movement and combo system, tying everything together and selling each hit, each throw, each powered-up punch or kick.

“Where Streets of Rage 4 remains almost completely faithful is with the simple approach to controls and combat.”


As is the beat-em up way there is repetition throughout Streets of Rage 4 and playing alone versus online or couch co-op highlights some of the shortcomings. From boss battles and certain encounters that feel too easy or a little cheap, to the short and sweet length that focuses on new characters to reward replay over say multiple paths or environmental variation. But even if you were to breeze through the dozen or so stages in a couple of hours and pop this back on the digital shelf, that time is well spent. 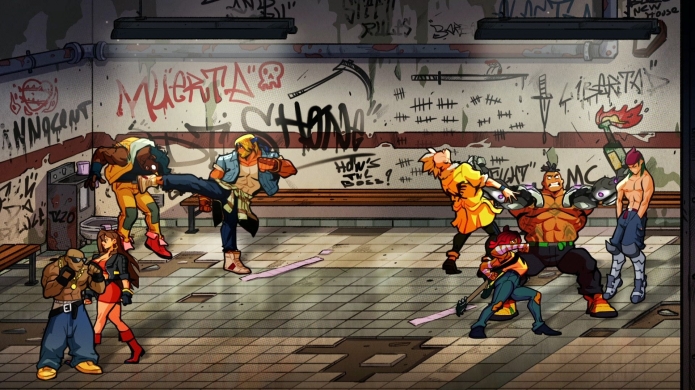 With several wonderfully constructed set-pieces and backdrops thrown in at regular intervals, picking up Streets of Rage 4 is something that we will do at some point again in the future. Thanks to its excellent feel, wide range of characters, and excellent soundtrack. With the return of the original composers in addition to new artists, the music here shifts between modern renditions of classic tunes to experimental techno and even some bass music. Not everything feels as timeless as the original soundtrack and the modern flourishes can feel out of step with the decidedly simple design. Not in the sense that modern electronic music is not as inventive or energetic or suitable for a beat-em up – but in the sense that perhaps Streets of Rage 4 doesn’t quite do enough to warrant the fresh coat of paint. And fresh set of beats.
Follow Us
Latest Reviews
More...
News Feed
Advertisement
Latest Threads
Log In
Create Account | Lost your password?