Obsidian’s Grounded first hit Early Access and Xbox Game Preview mid-way through 2020, created by a small team at the veteran studio looking to make a mark on the survival genre. With the added bonus of a setting reminiscent of the classic 1989 kids sci-fi, Honey, I Shrunk the Kids. Seeing a blade of grass support the full weight of a teenager, and watching as they battled ants and tried to build up defenses as they explored a sprawling backyard, proved to be one of the main reasons many (including us) jumped in.

It was fun, even when a large spider filled the screen and made short work of even the toughest of ant-based armour. Okay, so maybe the second time that happened wasn’t so great - Grounded in 2020 was an Early Access release in every sense of the term. A small section to adventure through, not all that much in the way of story or framework for why the kids were now super small, and the list of all the usual survival game things you’d expect to find there but not fully fleshed out. More proof of concept than a game.

Having checked out that version two years ago, and not coming back until the big Version 1.0 release, it’s astonishing how much Gnat Roast and Cooked Tadpole Meat there is on the bone. Grounded might take place in a single backyard, but it's a marvel of scale, scope, and what sitting with an idea and letting it grow can deliver. From an underwater world to discover under the surface of a pond to trying to survive the scorching desert heat of a sand pit overrun with bugs. It’s fantastical, cartoonish, and realistic in equal measure, with a sense of fun and even dread, expressed through impressive art direction and a moody synth-driven soundtrack.

It’s astonishing how much Gnat Roast and Cooked Tadpole Meat there is on the bone. Grounded might take place in a single backyard, but it's a marvel of scale, scope, and what sitting with an idea and letting it grow can deliver.


The backyard is peppered with small-but-now-large discoveries, including a functioning etch-a-sketch-like toy, discarded juice boxes, a rundown lawnmower, toolboxes with massive screwdrivers doubling as precarious platforms, a tabletop boardgame set up on a picnic table, and more. Each not only serves as a means to create biome diversity and recognisable landmarks but as a nice little reminder that in the world of Grounded a dew drop forming on a blade of grass is something you need to look up to see. 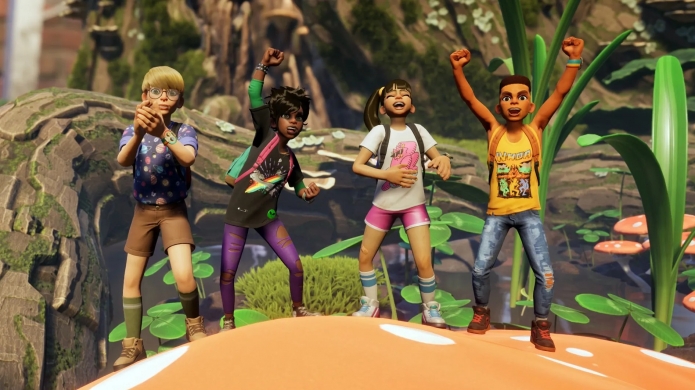 Playable from a first or third-person perspective, the full release of Grounded is polished and detailed - with just about all of the things we wanted to see, and more, included. Looking back at our impressions of that first release, we put together a wishlist. Covering everything from more weaponry and unique armour sets with progression, to more base building options, and even the ability to set custom map waypoints and draw on a bestiary containing all the creature and item info you’d need.

All of that is here and Grounded 1.0 feels as big and inviting as standing on a twig and watching the sun set in a seemingly innocuous suburban backyard. At its core, Grounded is still very much a survival game - something reinforced by those initial moments in the backyard. Waking up and exiting a briefcase to find that you and a group of friends have become the size of an ant standing up straight leads to what you expect in a genre made popular by the likes of Ark: Survival Evolved and Conan Exiles. 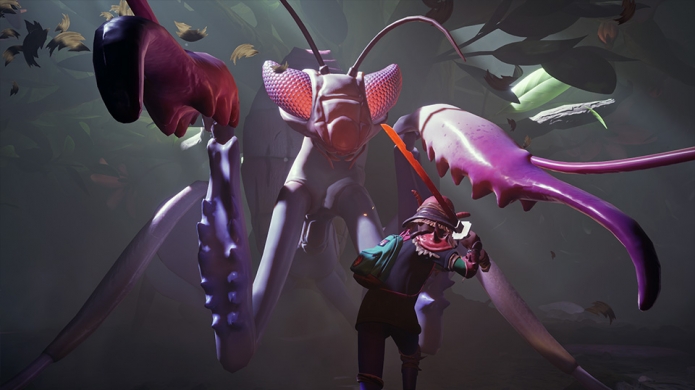 You’ll need to find food, and water, build some sort of shelter, and slowly explore your surroundings. The good news with Grounded 1.0 is that a lot of the above is driven by story and clear quests to complete, and you can tune the experience to suit a more casual exploration-based play-through versus one that’s as dangerous as stumbling on a mosquito the size of a helicopter could be. The story and narrative though, outside of the awe of discovering and trying to find a way inside a sci-fi lab built inside an ant colony or high amongst some bushes, is more lore-based than character driven. More uncovering a mystery versus trying to communicate with the wider world and coming up against new obstacles as you find your way home.

At its core, Grounded is still very much a survival game - something reinforced by those initial moments in the backyard.


For good and bad, Grounded is a survival game first and foremost, and rarely takes concepts, well, grounded in this genre into a neighbouring backyard. That said the default Medium difficulty is quite challenging and makes a large number of threats like spiders, armoured bugs, and more, difficult obstacles to overcome - punishingly so. Playing on the default setting also amplifies the need to focus on basic survival and chipping away to create a stash of survival gear and items to make even a seemingly simple 200-centimetre trek, possible. Versus, say, spending as much time exploring as you are ‘on a mission to collect Acorn Tops’. You’ll be looking for food for several hours. 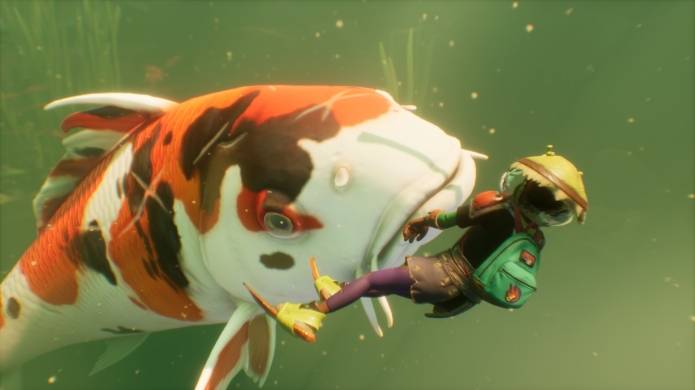 Obsidian has included an option to play in a Minecraft-style ‘Creation’ mode, but the sweet spot (at least in terms of playing in co-op for this review) is Mild. Still challenging, but a lot more fun and in tune with the colourful presentation. Having the option to share worlds and rulesets and settings with a group of friends is wonderful, as is being able to fine-tune the overall difficulty and challenge. Item durability, food spoil rates, and even the ability to remove the horror of spiders in the game (by default, Grounded’s spiders are some of the most menacing we’ve seen in a videogame), there’s a lot of tweaking available.

As much as the in-game encyclopedia keeps track of recipes and things, it all adds to the complexity that comes with a modern survival game. Long lists of things that are used in crafting that you might need so why not create half a dozen stashes and then play a game of inventory management (and collection) every once in a while. The good news is that if you place a storage chest near a workshop or smithing station it will automatically grab goods within an area of effect.

In keeping with the realistic nature of a garden, almost every beastie has its territory within the backyard. And aside from the ubiquitous weeds, grass, and plant fibre, so do the majority of crafting materials and edibles. Learning where each creature keeps its lair and which bush supports berries is part of the exploration process but can become tedious when a frequently used late-game commodity like Pupa Leather can only be found in a single location many, many, centimetres away.

Having the option to share worlds and rulesets and settings with a group of friends is wonderful, as is being able to fine-tune the overall difficulty and challenge.


A method for cultivating crops and even breeding creatures for food and materials would be a welcome addition to the base building and resource management aspects. Aside from upgrading items and crafting new gear, the majority of base building is purely cosmetic. So yeah, even at the 1.0 stage - there are still a few things we would have liked to see. Including an actual compass and a map that’s easy to read. 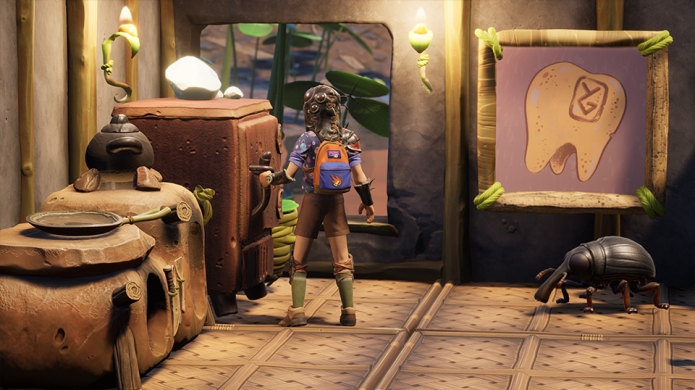 For those that have been playing the most recent Early Access release, Version 1.0 does introduce a new, and huge, Upper Yard location that is almost overwhelming in size. Exploring the Upper Yard is fraught with danger and excitement and this brings to mind one of the most fun and versatile aspects of the “build anywhere” approach seen in Grounded - the ability to set up zip-lines. You’ll need a lot of spider silk, but in our co-op play-through, we managed to create a 650-centimetre zipline running from the Upper Yard all the way to the front of our double-story rock, pebble, clay, grass, and clover leaf abode. As opposed to breaking things down and moving to a new locale.

Grounded is an impressive entry in the survival game genre and one where the setting of being tiny in a suburban backyard amplifies its strengths as well as the stuff that we’ve all seen before in other titles. There’s just something fulfilling about hacking away at a thistle stem and using the falling debris to craft arrows - and then using said arrows to take out fireflies at night and then using those materials to create a makeshift mining helmet equipped with a torch. Even though the default settings feel overly punishing, and grind-y in terms of crafting, Obsidian does let you make your own rules - which for any time spent playing games in a backyard setting, is a definite plus.
Latest Comments
No comments currently exist. Be the first to comment!
You must be logged in to post a comment. Log in now!
Follow Us
Latest Reviews
More...
News Feed
Advertisement
Latest Threads
Log In
Create Account | Lost your password?