A celebration of the long-running franchise and a great way to kick off Switch gaming in 2023.
Fire Emblem Engage Review - Strategy Gold
Grounded - Early Access Impressions From Obsidian’s Tiny Survival Game
Post by AdrianHaas @ 01:19pm 04/08/20 | Comments
Grounded is a lot of fun - but like any backyard being put forth to the producers of Backyard Blitz, it needs some work.


Just released on Xbox Game Pass in Game Preview form, Grounded is Obsidian’s totally-not-a-RPG project currently in development by a smaller team at the studio. As in the place that gave us The Outer Worlds, Pillars of Eternity, and Fallout: New Vegas. Since its debut last week it’s already proving to be a hit with survival game fans - topping both the Steam sales charts as well as trending fairly highly on the most viewed list on Twitch.

While its Honey, I Shrunk the Kids vibe isn't new, it's one that is put to great use here. Much like the film that saw scientist Wayne Szalinski create a shrink-ray that led to his kids (and the Thompsons) inadvertently getting trapped in his backyard - the same intimidating jungle of proportions can be found here. 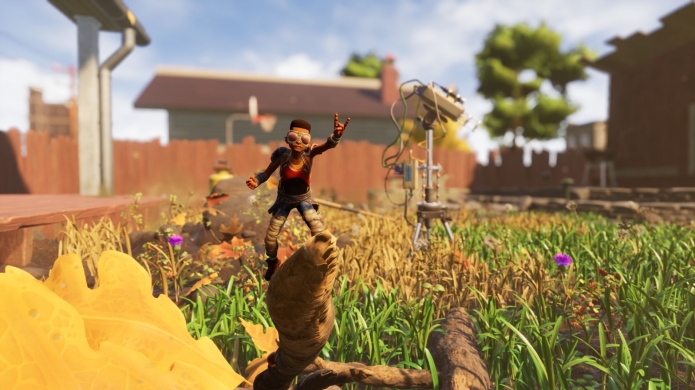 Waking up all tiny and alone, you and up to three friends must survive in the vast landscape that is a regular suburban backyard.

At first glance, there's not a lot separating Grounded from other survival games like Ark: Survival Evolved or Conan Exiles. There's your typical survival tropes: hunger, thirst, exploration, weapon and armour crafting, shelter building, and so on. What sets Grounded apart from the crowd though are all of the little things, like quest markers measured in centimetres and the fact that you're not gathering rocks or even pebbles; but peblets. Hydration comes in the form of dew drops, and the clover portion of a four-leaf clover is strong enough to withstand your weight.

"What sets Grounded apart from the crowd though are all of the little things, like quest markers measured in centimetres... ”


At this stage of the game's Early Access journey, things are as relatively bare as the wide open spaces of a new vegetable plot awaiting seeds - in Grounded such a site is huge. Only a portion of the story has been revealed, and with the opening teaser being engaging as it is, there’s a sense that this is more proof of concept than a rough-around-the-edges full game. 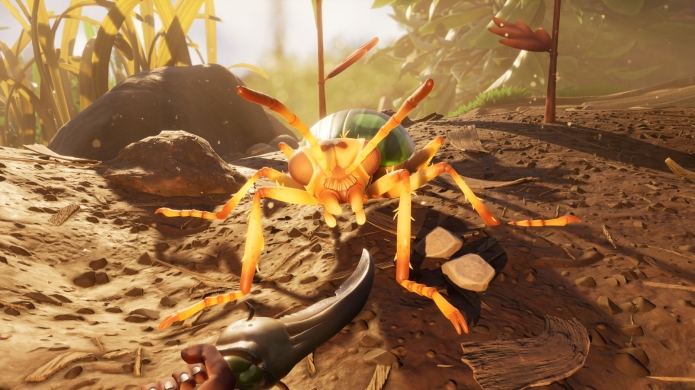 Some sort of science experiment gone wrong, an actual science lab with robots and a fun story to discover are all great but it’s not long before the entirety of what’s here falls back to pure survival. And sprucing up your backyard dwelling with the help of load-bearing grass.

As an Early Access title, Grounded has its fair share of bugs and balance issues, and we’re not just talking about the Aphids and the Soldier Ants you come across. Doing battle with hostile creatures shouldn't be a trivial exercise, even in a garden setting. But, when anything larger than an ant is one-shotting you, regardless of how much acorn-encrusted armour you've got equipped, fighting in Grounded quickly becomes something to be avoided. And not all that fun.

And when it comes to the many insanely aggressive spiders found throughout the grounds - encounters become a case of see and run. Which is unfortunate because those spider bits are really useful for crafting. Stealthily crouching to creep past enemies isn't particularly effective either, nor are the craftable traps. No doubt there will be a lot of rebalancing in the coming months. Maybe it’s as simple as buffing player health or nerfing spider damage. Either way weapons and traps feel weak, and so far Grounded doesn’t really offer much in the way of progression. 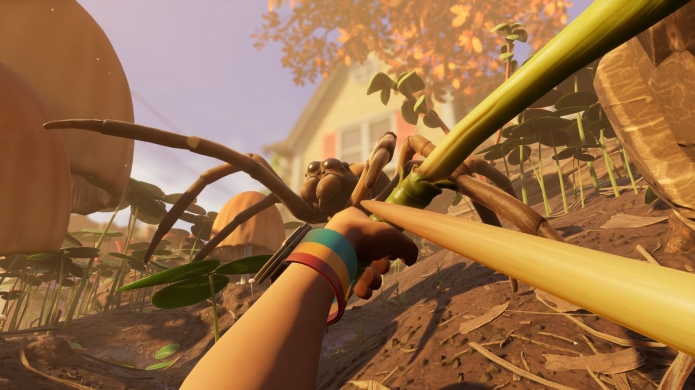 In fact, some kind of dodge ability would be nice as a means to add some strategy to taking on ants and spiders. As opposed to pure stats.

The game's day/night cycle is a solid feature in terms of turning the familiar backyard into a place of terrifying shadows and nightmarish spiders complete with glowing eyes, but it too feels incomplete. Like a well maintained plot, you’re probably starting to notice a pattern here. For one this side of the experience needs a little variety - different species of insects need to be present, like fireflies, or moths that are attracted to your torch and the light sources at your base. More than the glowing eyes of a spider lurking amongst the weeds.

"And when it comes to the many insanely aggressive spiders found throughout the grounds - encounters become a case of see and run.”


Base building and creating your tiny abode is an area where Grounded excels, and one that has the potential to really shine with future updates. Like with weapons and other crafting there's a limited number of construction options, and the sheer hostility of the place means you’ll want to build your base above ground level. And sure, construction costs feel a tad high - especially when you spend several minutes lugging a few pieces of grass from a “logging site” back to base - but the variety and relative ease of construction is already in a good place. Highly polished and without all the bugs and performance quirks one might expect from an Early Access release.

In the end the game doesn’t shy away from its Early Access nature, and if you bee-line through the story (which puts you on the trail of the the what, where, why, and how) you’ll be presented with a message from Obsidian asking for feedback in terms of what you would like to see. A way in which to include the community in how Grounded might look six months or a year from now. So in that spirit, here’s our immediate wish-list outside of more story content.

Grounded is currently available to play in Early Access on PC and Xbox One.

Read more about Grounded on the game page - we've got the latest news, screenshots, videos, and more!
Tweet