The term “open-world” has become something of a genre descriptor in recent years. The style of game where mechanics like quests, side-missions, activities, skill trees, collectibles, a map dotted with icons aplenty, and a way in which to expand said map with a “reveal tower” of sorts, are a part of the underlying blueprint. Ghostwire: Tokyo from Tango Gameworks and Bethesda definitely falls neatly into this descriptor, but it also brings to light the most important part of the open-world experience. The world itself.

Ghostwire: Tokyo is a first-person action-adventure that takes place in an abandoned modern-day Tokyo. Abandoned in the sense that all of the people have mysteriously vanished, with spirits and beings from Japanese folklore taking their place. All of the action and narrative beats take place on a single rainy night, with protagonist Akito working with an inside-his-body spirit by the name of KK, a former detective, to uncover the mystery and restore the balance and barrier between this world and the next. 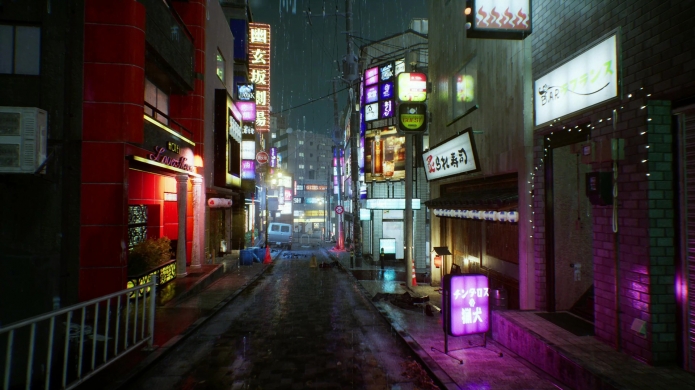 It’s an exciting and unsettling premise, and thanks to the wonderfully realised vision of the Tokyo you get to explore, it’s something that is often beautiful. Which brings us back to the idea of the prototypical open-world action-adventure, where familiarity serves as a foundation for original implementations and takes and spins on stuff we’ve all probably done before. Ghostwire: Tokyo is an experience where immersion and originality is born from the technical and artistic brilliance on display, and the care and attention to detail Tango has put into every building and alley-way you discover.

Ghostwire: Tokyo is an experience where immersion and originality is born from the technical and artistic brilliance on display, and the care and attention to detail Tango has put into every building and alley-way you discover.


Although it’s a very different style of game, there’s a comparison to be made with Cyberpunk 2077’s Night City, and how walking its streets evokes the sense of being a tourist in a place that feels real and architecturally seamless enough to draw you in. As we’re getting a supernatural take on a very real place, it’s kind of incredible just what the team has managed to pull off. And that is, create a true next-gen PlayStation 5 open-world experience.

As we’re talking about Tokyo at night, the light of an ominous full moon alongside streetlights, signs, and billboards means visibility is rarely hindered. Akito has a flashlight but it’s used sparingly and for those moments where shadow and darkness are there for dramatic and cinematic effect. The abundance of puddles and real-time ray-traced reflections everywhere you look adds a dose of depth and detail that would be impossible on the previous generation of consoles. Supernatural wide-eyed wonder that, if you’re of the sort, will have you reaching for that capture screenshot button pretty regularly.

As one of the most technically accomplished releases to date on PS5 (and PC), the true magic comes from the use of cutting edge technology and the wonderfully realised art direction. It’s the latter that makes the open-world a joy to explore, where Japanese history, modernity, folklore, and real-world detail can be found across the inanimate objects you see and the tangible building blocks of Ghostwire’s spin on the open-world action-adventure. 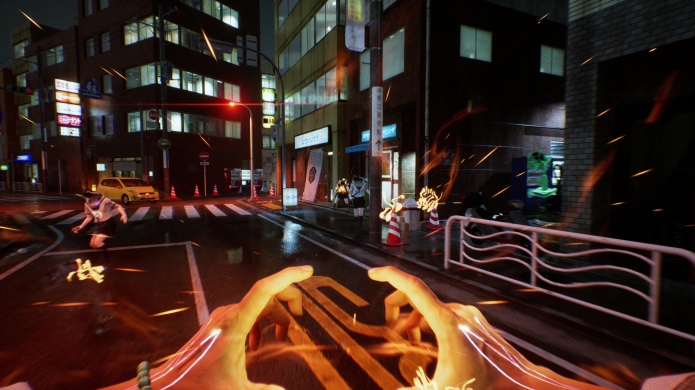 Torii gates serve as both a mechanical and thematic underpinning to opening up new areas to explore as well as visiting the spirit realm, shrines and beads boost your power or uncover secrets, creatures from folklore let you grapple onto rooftops via magical weaving, and little things like collectibles and food items to restore health are based on things found in Japanese culture. Convenience Stores are run by spectral cats too. Even the combat, which takes on the form of firing off elemental projectiles from your fingertips, draws inspiration from traditional Japanese martial arts.

The abundance of puddles and real-time ray-traced reflections everywhere you look adds a dose of depth and detail that would be impossible on the previous generation of consoles.


Unfortunately though, the combat, which takes up a sizable portion of Ghostwire: Tokyo’s action, is of the sort that can be more fun to watch than it is to engage with. There’s a Tetris-effect meets Rez quality to the pyrotechnics and luminous glow you see, not to mention performing finishing moves to extract ‘Spirit Cores’ looking like you’ve cleared a board in Geometry Wars. The problem, or at least issue, seems to be with the overall simplicity and reliance on a single block move over fluid movement or “weapon variety” outside of the three main attacks and a few buffs. 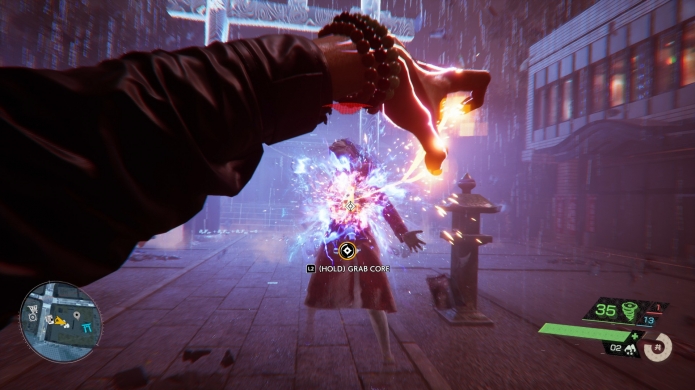 With a painfully slow strafe and no dash move all you can do is block incoming projectiles or try and perform a perfect block/parry to stun, or throw down limited stun. When it gets busy you then have to look for the right time to perform a finisher because the time it takes to do so leaves you open to attack from spirits that are a lot faster than Akito. Coupled with ammunition management being something you need to constantly manage, and the overall elemental damage being fairly minimal (even in charged up form), encounters quickly devolve into rinse and repeat battles.

The flipside to this, and something that serves to add weight to the well-realised setting, is, well, the weight of movement. How Akito turns around corners and strafes has a distinct realistic feel that highlights his humanity in a world overrun by spirits. 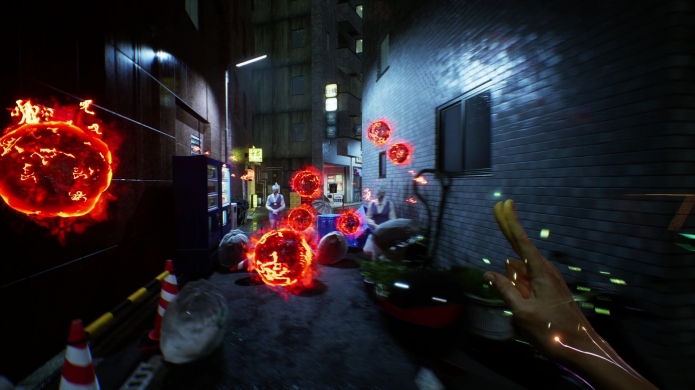 Progression and unlockable skills also sit on the uninteresting side, opting for “decrease the time it takes…” abilities versus stuff that will properly reward you for spending the time to see and do everything. That is, offering up varying play-styles to discover or simply letting Akito and KK become an unstoppable spirit zapping force. And with that capturing and releasing lost spirits dotted throughout Tokyo as a means to earn additional experience becomes more about the former than the later.

The act of absorbing spirits into a Katashiro and then using a phone booth to connect with a mysterious voice who can help channel them to freedom is at once strange, fascinating, and well executed.

Unfortunately though, the combat, which takes up a sizable portion of Ghostwire: Tokyo’s action, is of the sort that can be more fun to watch than it is to engage with.


A sentiment that applies to the majority of the side-missions and stories you discover, which are all pretty great and different from each other, even if they retread the same ground mechanically. It’s here where Ghostwire: Tokyo shines, as you take on the role of someone that actively wants to help spirits and those that have died find their way. For my playthrough I took the time to discover and complete all of the side missions and stories as they added real context to the world and its temporarily departed citizens. The diversity of stories and the emotion on display draws on Tango’s own history with horror, weaving many personal and tragic stories with the main cataclysmic narrative.

Real-world locations like a small house or apartment, a subway station, a hospital, are brought to life in a way that creates genuine atmosphere and tension. Ghostwire: Tokyo isn’t pure horror though, it’s mostly a supernatural adventure that leans into scares when the story calls for it. How setpieces and locations shift and change dynamically, sometimes nightmarishly, is another highlight - and it’s something Tango probably should have leaned into a bit more.

In the end it’s interesting because even though there’s thematic weight and meaning behind all of the open-world elements, they never really come together in a way that feels in-line with the smooth hand movements of Akito and KK performing a charged up elemental attack. Disappointing combat, lacklustre progression, and way too many collectibles-to-find aside, the Tokyo you get to explore serves as an impressive and memorable backdrop for a supernatural tale. With some great cinematic storytelling across the main narrative and the many side-missions you discover, Ghostwire: Tokyo becomes more than the sum of its parts.
Follow Us
Latest Reviews
More...
News Feed
Advertisement
Latest Threads
Log In
Create Account | Lost your password?