I hate having to be the messenger here -- and that statement could work as my eight-word review -- but I must deliver some bad news today. Unless you're a super hardcore Kojima fan who's been devouring every single scrap of pre-release info on Death Stranding, there's a good chance you're about to saddle up with something that isn't what you think it is.

A Konami-less “Metal Gear Solid 6” this is not. Anybody who excitedly unwraps this package with those expectations, will want to return to sender in record time. Yes, the controls still feel the same and Guerrilla Games' Decima tech does an uncanny impression of the venerable Fox Engine. There's also a smattering of stealth here, along with Kojima's weird fixations with boxes and bipedal bots. Aside from that, however, Death Stranding is unrecognisable. Not only does it massively deviate from the usual MGS modus operandi, but also from what the average gamer expects in their open-world action-adventures.


Watch Griz's video version of this review embedded above

And a quick disclaimer here: I always approach 'new' as a good thing. For decades I've respected Kojima as an auteur, a bold paradigm pusher who perhaps goes a bit too loopy and lengthy with his dialogue. But even with those concessions in place, my pioneering enthusiasm was soon crushed under the weight of what is a ludicrously slow-burn, slog of a game. Death Stranding is, quite literally, a 40-hour series of mostly on-foot, Pan-American fetch quests. I've not seen a game this disrespectful of player time since Grass Growing Simulator 2019™.

You can forget tactical espionage action where you strive for flawless infiltrations and S-ranks. Gunplay is clearly an afterthought, too. Hell, don't even expect to get any means to defend yourself until X hours in. Your first lethal firearm rocks up at the eight-hour point, too.

You really must surrender yourself to this fact early on: the overwhelming, back-breaking bulk of Death Stranding is hiking simulator gameplay where your greatest enemies are gravity, gradients, weight distribution and stubbing your toe. By hour X, when vehicles finally get introduced, Death Stranding pivots a little by having you become a post-apoc Postman Pat who's shlepping parcels in a Dark Souls difficult world.

As to why you're doing all this, here's a barebones (minimal spoiler) explanation of Death Stranding's premise. You are Sam Porter Bridges (Norman Reedus) the gruff, legendary Big Boss of picking shit up from Point A and heaving it to Point B. Your “postal route” is a fractured, super-shrunken America that's been brought to near-extinction by the titular paranormal event.

Basically, mankind has managed to quantify the process of death much better, and it's suggested that our buggerising around with it has precipitated the almost total destruction of our species and lands. For whatever reason, when people die and they're not quickly incinerated, they cause a ‘voidout’ – an explosion of near nuclear proportions. Likewise, this hellscape planet of ours is now burdened by extra cross-dimensional phenomena. Invisible ghouls called BTs haunt certain areas and will drag the living to their doom. Their presence is slightly telegraphed by “timefall”, rain that prematurely ages whoever it touches, quicker than a swig from the wrong Holy Grail.

"Sam can cross back from death and the “beaches” beyond (think: every human soul's self-defined image of the hereafter.."


As Sam (and it should be pointed out that his middle and last names are simply his job title and employing company) you're a loner of special significance. Firstly, you're the estranged son of the current U.S. President, and a repatriate -- an individual who can refuse to join the choir invisible. Sam can cross back from death and the “beaches” beyond (think: every human soul's self-defined image of the hereafter... that almost always feature dead sea life). 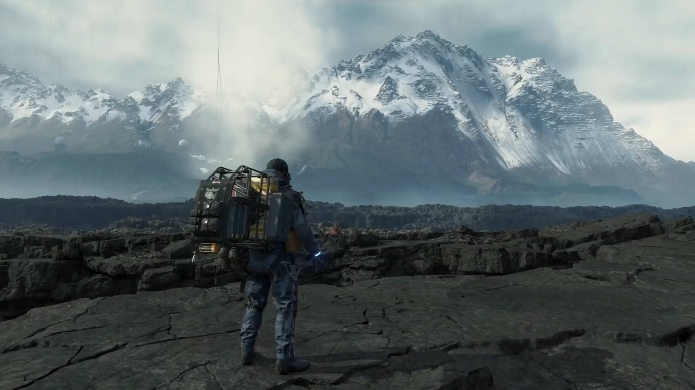 You also have a special bond with a Bridge Baby, or “BB”. I won't say too much about it, but BB is basically a little stomach mounted sidekick who allows you to “sniff out” where the BTs are in the world – essentially via a “you're getting hotter/colder” mechanic. The bond between you both continues to grow as you progress on your quest to more or less walk from New York to LA, manually reviving your employer's Wi-Fi network with a physical master key. Bringing roughly a dozen of these sites online and collecting/delivering resources in the field will then allow you to “3D print” increasingly useful equipment.

That's all secondary, however, as your main objective is to drag your over-encumbered arse ever Westward to save an acquaintance from your past, Amelie (Emily O'Brien). She's been cornered by voidout-happy terrorists led by Higgs (Troy Baker), a nemesis who can manifest BTs at will, and he also seems to have a history with your enigmatic helper-along-the-way, a rival courier named Fragile (Léa Seydoux).

Honestly, the tale that gets told just wasn't for me. The story starts interesting, but it, and indeed the gameplay as a whole, is terribly paced. The entire ‘Death Stranding’ experience is like the three stages of any arduous mountain climb.


Watch a 'tech demo' of the game's engine in action, thanks to GrizGaming

The first section is incredibly long and difficult – an uphill battle of attrition where you'll struggle to find your footing in this bizarre world as your stamina and patience meters are pushed to the absolute limit. Being made to ferry so-called important items (like pizzas and cosplay supplies) across kilometres of deadly terrain to unappreciative jerks sure won't endear you to the process, either.

Also, while Kojima's writing has always required an open-mind and a love of the fourth-wall break, what's on offer here is almost impenetrably convoluted and confusing. Seriously, you need to play this with subtitles on or you'll get lost in the technobabble as Kojima conflates the names of people/places/things with pseudo-science and spiritual metaphors.

"Likewise, camps of once-feared human enemies had now become a pushover – Death Stranding doesn't even reward or punish any style of approach here..."


By hour 10, I hit stage two and the absolute rut that I'd ground myself into became something of a weirdly pleasant groove. At the summit of this experience, I was stocked with cool gear and a sweet trike, all of which allowed me to either eliminate areas of BTs, circumnavigate their neighbourhoods without fuss, or just make daring bullrushes through their midst. Likewise, camps of once-feared human enemies had now become a pushover – Death Stranding doesn't even reward or punish any style of approach here, so I took to roadkilling entire villages with a truck. It beats the hell out of using guns that draw their ammo from Sam's own blood supply. 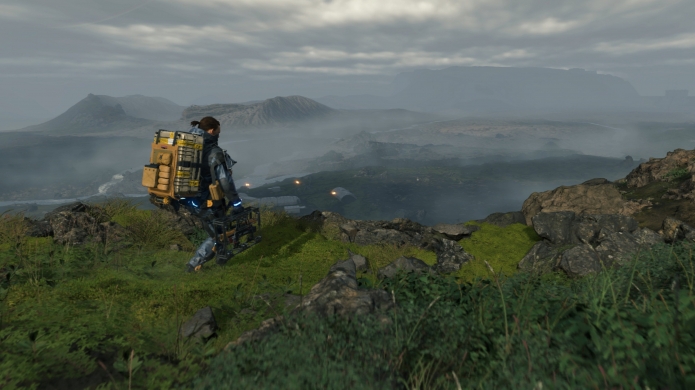 Loot paydays like this allowed me to invest in the shared-world-building with my fellow early-access reviewers. When exploring an area outside of Wi-Fi range you'll always be cut off from supply and at the mercy of the elements (beyond the odd rope, ladder or bridge laid by another player who has Burke and Wills'd it before you).

However, any chunk of the sandbox you do “own” can be seeded with more complex chunks of civilisation, including rest areas and post boxes, cyber-cabin rest areas, vehicle refuelling generators or timefall shelters that rejuvenate the health of your cargo containers. Laying down electro-magnetic ziplines for one another becomes a thing, too. I legit could have kissed the player who kept setting up a network of these. Champion turned a 45-minute death march through white-out blizzards and BT country into a 30-second pleasure cruise through the air. CaptainDongs, if you're listening, you’re the real MVP.

Maintaining the integrity of your packages is the true source of tension and challenge in this game. If you Mr Bean down the hill like an idiot, or take too long, blindly feeling your way past BTs in the timefall and timesnow, you'll degrade your precious cargo. That'll lower your order/mission rank and deplete your crafting material rewards. 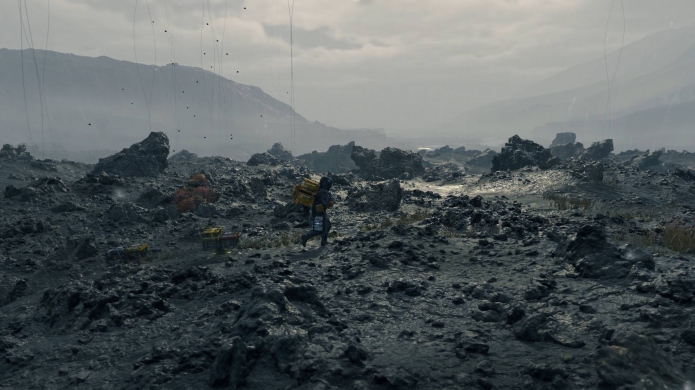 Honestly, this main loop sounds more taxing than it really is. I played the whole game cranked right up to Hard and hit 95% S ranks using nothing but grit, spit and common-sense climbing decisions. It was a piece of piss. Literally, too -- there's a urinate function that can be used to keep BTs away from you. Bridges has even found a way to weaponise Sam's unique, repatriate piss, poop and shower leavings into grenades. Because Kojima.

Shit-flinging shenanigans aside, once you reach the peak of this experience, like all mountain climbs, you have to dismount this bastard. And this is the point where Death Stranding proceeds to go downhill with all the grace of a fat man chasing a cheesewheel. The plot, which up until this point has required you to shoulder a ton of disbelief-suspension, now becomes a descent into tedium. Traversal once again slows to a molasses pace as the narrative awkwardly seesaws between overwrought dialogue and a series of obvious reveals.


I can't spoil any of it here, suffice to say Troy Baker's immense talents are squandered on a truly bizarre antagonist. Similarly, the constant memory flashbacks to Mads Mikkelsen's character don't lead anywhere particularly rewarding. That said, in general, I do think all of the Hollywood alumni put in solid performances, despite the uneven script they had to work with. Leading man Reedus pulls off his one-note brooding shtick well enough. He's no David Hayter, though. 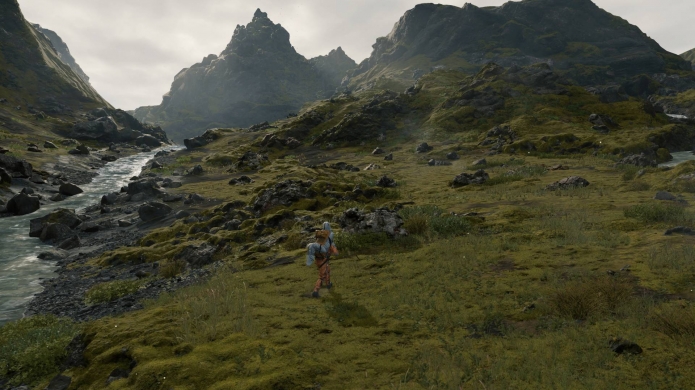 Sadly, the gameplay experience takes just as big a tumble in Act 3 as well. All of a sudden, hellaciously long backtracking starts to be folded in, most likely as a means to arbitrarily lengthen the proceedings. In the last 10 hours, Death Stranding introduces a variety of mechanics to aggressively slow you down by depriving you of the agency and equipment you've earned through blood, sweat and good online player relations. In the end – if you could even call it that – Death Stranding feels about three hours too long. I mean Christ – it'll take you a good 45-minutes to work out how to “progress” the multiple credits and epilogue sequences.

Be all that as it may, I cannot in good conscience recommend this game to all but the most rabid fans of Hideo Kojima's work. And even then, I feel like this game may cause some of them to balk and question their devotion. It pains me to say it, but Konami may have been a necessary evil for him, a check and balance against his crazier, more self-indulgent impulses. I mean you've gotta love the guy for being one of the few Triple-A devs out there with creative courage to try new things, but such an experiment needs to be anchored to an enjoyable game that doesn't make you repeatedly look at your watch and wonder when it's going to get great.

It's such a shame, too. The production values here are off the scale – both visually and aurally, Death Stranding is an almost flawless tour de force. That said, all the ethereal music and hyper-realistic Reedus arse in the world cannot deliver if the total consignment doesn't also bundle in tightly-packed gameplay lashed with a strong yarn.

In the end, all I can really say is this: handle Death Stranding with care.