Considering how inherently cool medieval combat is, it’s a wonder that games based on knights and castles don’t rival zombies when it comes to first-person popularity. Thankfully those hankering for some heavily armoured king slaying now have a superb game that is just what the Knights Templar ordered. Costing a mere $25, Chivalry: Medieval Warfare is a multiplayer-only, first/third-person, hack-and-slasher that grabs most full priced games by the throat, tells them they’re unfit to polish Chivalry’s armour, before running them through with three feet of tempered steel.

Being an indie game, I really didn’t expect much from Chivalry’s visuals. As my friends and associates can attest, I’m officially Australia’s biggest graphics whore, and for this reason I miss out on a lot of otherwise excellent indie games. Shoot me - I make no apologies for my love of eye candy. So when I fired up Chivalry and saw one of the most beautiful games of the year, I was truly surprised.

Built on the Unreal engine, each of the huge levels makes the areas in most other online shooters look like lifeless miniature movie sets. These vast medieval playgrounds are filled with huge castles, wooded forests, and moonlit cliffs. They’re not mere static backdrops for the carnage within, as each area is brimming with life; catapults flinging boulders at crumbling defences; ships circling in the bay under incoming ballista fire; the crowd cheering on in the arena. It ran like a dream on my admittedly hefty PC (i5 3770K at 4.5GHz, dual GTX 670 video cards), but other players with much more modest machines also reported fluid frame-rates. Full limb dismemberment and decapitation reward particularly effective strikes, and your weapons and armour will be covered in blood by the end of a match. Both first and third-person options are available depending on your preference; I favoured the up-close-and-personal approach so I could savour the sinew and cartilage whenever I’d graciously freed a foe of his cumbersome limbs.

Matching the visual brutality are some of the most gut-wrenching sound effects heard outside of a Hostel torture-porn movie. Men scream, whimper and gurgle as blood fills their throats. The twang of metal on metal is perfectly captured, but most fun of all are the various taunts and voice commands. The actors behind these must have screamed themselves hoarse during the recording session, and charging into battle with 15 other players all activating their “CHAAAAAARGE!!!” button at once never fails to get me chuckling like a drunken fool. This is some of the best voice-acting of the year, boggling for a game from such a small studio.

It looks and sounds great, but how does Chivalry play? This is a game all about melee weapons, so how the hell do you translate that to mouse and keyboard control? Pretty damn well, apparently. Longbows and crossbows control just like a normal shooter, except they take a little while to ready up. Swords, maces and axes require an entirely different set of buttons. Right mouse button is used to block, but you also need to aim your reticule at the incoming blow to ensure you head it off. Left mouse is used as a standard horizontal slashing attack, mouse wheel down is a thrusting jab, while mouse wheel up is a powerful overhead blow. Sounds simple, right? It’s anything but. This game is frickin’ hard. The problem is that you can’t hold a block indefinitely, which means you must block at just the right moment. 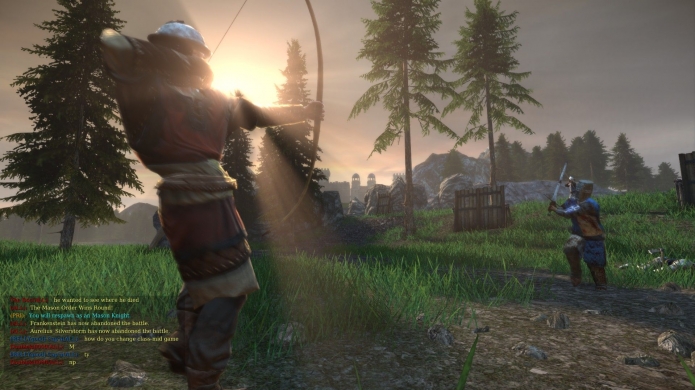 However, players can also feint their attacks with Q, tricking you into blocking early, then leaving you wide open for a follow up swipe when your block drops. There are also combos and kicks, and it’s possible to duck under or jump over incoming swings. Finally, a stamina meter that melts away for each blocked blow stops turtling. A hilarious tutorial gently eases the player into these mechanics, and also instructs in the use of siege weapons like the catapult, battering ram and ballista. Even with the excellent tutorial, prepare to get your ass handed to you for the first 10 hours or so as -- unless you’re a Mount and Blade veteran -- the combat here is unlike anything you’ve played before.

Mastering the basics of combat is made even trickier by the four different classes, which all have different strengths. The Man at Arms is the lightly armoured, highly mobile fella, and his double jump makes him a tricky foe to pin down in a fight. Archers have access to the longbow, crossbow and javelins, and can mount their shields in the ground to provide cover. Don’t let one sneak up behind you, as his backstab ability will have you eating dirt before you can say “ranged classes suck at melee”. Vanguards are moderately armoured foes with access to longer weapons like spears and halberds. These guys are tough to get next to, keeping you at range with their rapid fire thrusts. If you see one running towards you at high speed, get the hell out of the way, as his special charge attack can kill you with one strike.

Finally there’s the knight class, a heavily armoured walking tank who specialises in swords the size of a broom, and I’ve seen a solitary knight decapitate three men with a single swing. Unfortunately two of them were team mates, a gory reminder that friendly fire is always on. Nine different weapons are available from the get-go for each class, with another 20 or so unlocks. Unfortunately there’s no armour upgrading or customisation, the one area that War of the Roses has Chivalry beat. 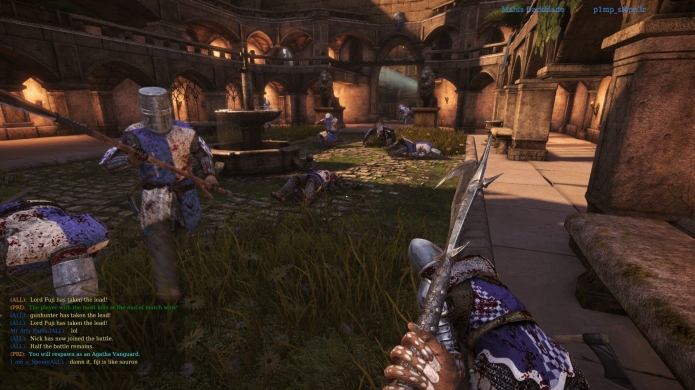 Each class has a different role to play in the game’s brilliant objective mode, which plays out very much like a Middle Aged version of Enemy Territory’s phased maps. Each level is broken into several key areas, and to unlock the next you’ll need to do something suitably evil. It could be pushing a wagon filled with rotting corpses into a castle’s water supply, moving a battering ram up to the gate or murdering 50 villagers as you burn their village to the ground. Environmental animations and superb sound effects make each objective feel infinitely more satisfying than standing next to a flag. Watching a team of archers manning the walls of a castle, pouring boiling oil on the battering ram below, while dozens of knights and vanguards face off in duels around the gates is every wannabe knight’s wet dream. A handful of other game types help to round out the variety, with Free for All, King of the Hill, Team Deathmatch and Last Team standing, but don’t be surprised if the server you’re inhabiting spontaneously erupts into an ad-hoc duel mode if the majority agree to it.

Given the small size of the development team it’s easy to forgive the few bugs that are present. I’ve noticed bows that don’t fire and strange animations after unmanning a siege weapon, but that’s about it. More worrying is the level count, with just six environments at launch, but there are more on the way as free content updates. Finally, the first few days of play have seen most players charging into battle headfirst without any team co-ordination, leading to an easy win for the defenders. Hopefully teamwork will grow as players get better, and the inclusion of VOIP should make it easy enough to work together.

In case you hadn’t noticed, I’m rather enamoured by the unique flavour of online combat presented by Chivalry. It’s fresh and fun, and like the very best games is easy to get into yet incredibly hard to master. I’ve honestly not had this much competitive online joy since Battlefield 3, and to think a $25 indie title can provide a level of enjoyment up there with a $100 million game like Battlefield is testimony to the skill of the developer. This might be the first commercial release from Torn Banner but it will definitely not be their last.
Latest Comments
Link