At this stage Call of Duty: Ghosts has been out on current-gen consoles for the better part of a week, and you’ve likely read a host of reviews detailing the gameplay experience on either PS3 and Xbox 360, as well as mentions of the game running on PS4. You’ve probably even read a PC review or two. For those of us who chose to review the game on Xbox One, however, we’ve been locked under embargo until now. No specific reason was given, though the date was not one chosen by Activision. Regardless of the reasoning though, we held off on our review to give you the full Ghosts release gamut of platforms -- in this transitional phase, knowledge is power, and without all the facts, we just felt we had an obligation to give you the full experience as it was delivered to AusGamers.

With that out of the way, the first thing to really regale is that Call of Duty: Ghosts is a mess of a game. That’s not to say that it’s nonfunctional or bad to play, rather, it loses sight of its core principles and eschews an amazing opportunity with the advent of our transition to next-gen, as well as being the first true IW CoD sans Zampella and West, through poorly constructed (and utilised) tech, half-assed delivery of modes and a single-player campaign that sets the series back more than a few years. 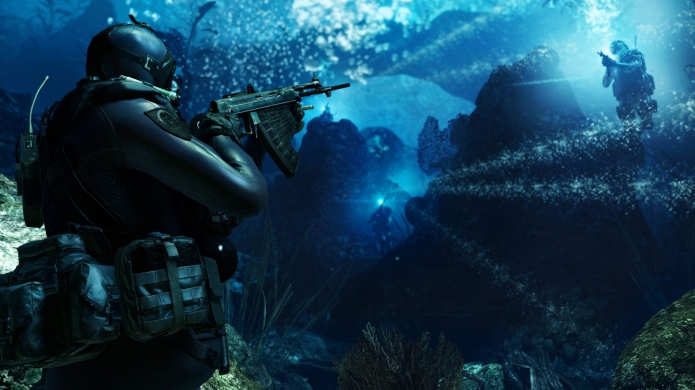 There’s no denying that multiplayer is the game’s mainstay year in, year out, but even in that area the team has elected to take a lighter, more accessible road, and it just leaves the game rocking back and forth on a precipice of passably functional, or a deadly drop.

Half of my main issues with the game arose during the single-player campaign which was running at 60 frames per-second on both PS4 and Xbox One, but only natively at 1080p on PS4 with the Microsoft platform version upscaling to 1080p from 720p. The result here saw a few drops in performance on the PS4, and it running silky smooth on Xbox One, but with a lot more jaggies. None of that really mattered though. The real problems came when the game’s opening few levels offered up a visual palette that might as well have been running on current-gen (I honestly thought for the first few missions that Black Ops 2 looked better), which was jarring enough, but later in the game you’ll start to come across levels and missions that are completely mismatched to most of what’s come before them. The jungle level and, in particular, the underwater scuba level are shining examples of how a game should look at this stage on next-gen machines, so seeing these in the wake of the rest of the game just didn’t make sense.

In many ways though, this sort of inconsistency nestled pretty comfortably alongside the game’s ridiculous plot and story beats. If you haven’t played through it yet, the set-up is among the more “out there” of the Call of Duty universe that sees the US and South America (now simply called the “Federation”) as the only two superpowers left in the world. How South America rose to power remains a mystery throughout the game, and the exposition setting them up as the bad-guys is as elusive as the main protagonist’s voice. You play as Logan, one of two brothers who are tied to the conflict that erupts through their dad. Infinity Ward adopted the studio’s tried and tested voiceless driver idea for Ghosts, but here it doesn’t remotely work. Being tied to the same character for almost the entirety of the game, with no sense of emotion on his part hardly makes for great storytelling. And given the studio has been pushing the idea of Ghosts being a more intimate and emotional fare with your ties to your brother, Hesh, Riley the dog and your father, Elias, it really doesn’t make much sense to be playing through the game as a mute. 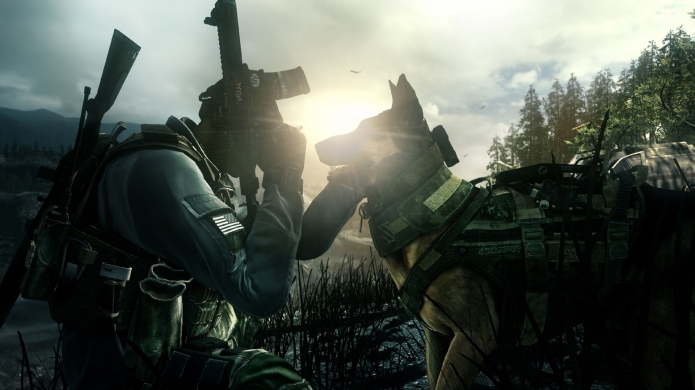 What makes that more impactful in the negative, is how your father and brother actually treat you. They’re constantly barking orders at you and making you do the dirty work. There’s very little to actually bite into here, as far as being compelled to do their bidding, and at times you feel more like you’re the actual pet in the game, rather than Riley.

Your K-9 buddy is perhaps a nice break from the norm, but he’s not as big a fixture in the game as we’d been lead to believe, and there’s a mission in the game’s third act featuring Riley that is one of the most disjointed and frustrating in your journey, and for all the wrong reasons. There’s fun to be had in a lot of the vehicular missions, though these are hardly thought-provoking in engagement -- rather, they represent that arcade component of the series that people tend to lean more towards. Without them, it’d be one of the most boring rides in the series’ history, but they, and a few other missions such as the aforementioned jungle and underwater ones, keep the game somewhat playable, it’s just a bit of a stretch to get there.

The translation of the single-player experience’s disjointedness isn’t as apparent in multiplayer, but the idea that the game really could have done with more time in development does shine through. Omissions such as Headquarters are more than a slap in the face to some of the die-hards, they speak of a misunderstanding of what Dutes multiplayer is all about. There’s a greater emphasis on quickplay here, with most new modes being more a variation on TDM than bearing any resemblance to some of the slower-paced modes the series has seen over the years. Unfortunately this doesn’t necessarily gel with some of the more expanded maps the game offers up now, with some being so big, it becomes a requirement to equip the Marathon perk, just to get to objectives such as a capture point in Domination. 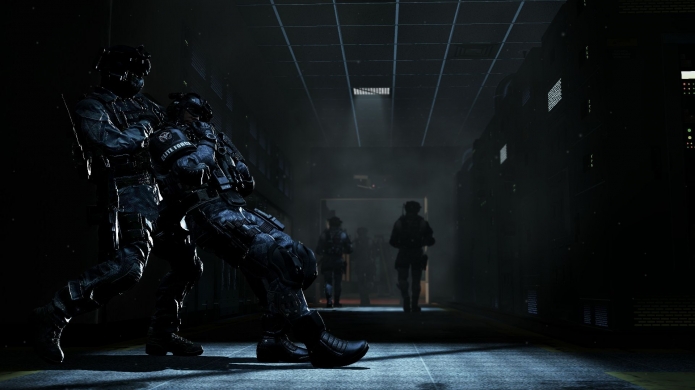 Likely, the larger map sizes are Infinity Ward’s way of saying “we have big spaces too”, but there’s so little to do in these beyond the basic run-and-gun, that they border on tedium. Where the new maps excel is in nuance -- trench lines and hideyholes litter the space, and they often carry with them varying levels of verticality to really shift up your approach to engaging the enemy. It’s a lost design initiative though, and one that doesn’t really reflect the faster nature of most of the modes. Moreover, the dynamic map changes that have been touted, don’t really make a major impact on a game built around sprinting. More than anything, it just means you need to change your favourite route through the map.

Search and Rescue, which is basically the same as Search and Destroy with Kill Confirmed thrown in to make permanent death avoidable, is probably the cream of the crop as far as any of the new modes go, and allows you to take full advantage of those design nuances I mentioned earlier. It doesn’t work too well in some of the larger maps again, but that’s forgivable because of the nature of being able to keep your downed allies alive, or to permanently take an enemy out of the game. A few other interesting modes rear their heads in Infected where one player starts as an infected human armed only with a knife while everyone else is on the same side and armed with normal weapons -- the goal being to “infect” the other players who will then join your side until the last person is killed, or Hunted where random weapons drop around the map giving you more powerful wares, with the clincher being everyone will know where you are through said weapon drops.

They’re not ground-breaking modes, but they show that there was some forethought going into the multiplayer design overall, it’s just fallen short of where the series should be by now, especially after the valiant effort Treyarch put into shaking all facets of the game up with Black Ops 2. 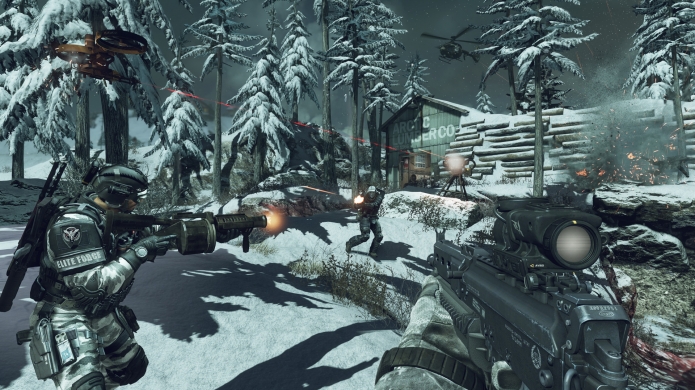 And staying on Treyarch point, IW has also created their own Zombies-esque mode with Extinction -- a four-player co-op romp through a desolate town where you and your squad are tasked with ‘drilling’ through alien spawn points while fending off waves and waves of them. Honestly, it was the most fun I had with the game, but was very short lived. Four of us knocked it over in less than two hours with no real fanfare to follow. There’s only one map and no other variants of the quest, so once you do it once you’re not likely to really bother going back. Not fleshing out this mode feels like one of the biggest missed opportunities of Ghosts, but it speaks volumes about the product as a whole.

The shortform point in all of this is “if you love Call of Duty, you’ll find some value here, but not nearly as bolstered as it ought to be at this point”, if you’re on the fence though, it’s a hard stretch for me to recommend this fully. Being able to update to a next-gen version of the game over your current-gen purchase for just $10 is a nice gesture, and there’s no doubt you’ll find a lot of people to play with thanks to the hardcore fans who keep coming back, but the whole package is just such a mess it hardly makes it worth it. There’s no doubt that Treyarch is the A-Team behind the series now, and depending on how Sledgehammer fares with its entry, I wouldn’t be surprised at all if IW becomes the C-Team. There’s nothing overly “next-gen” about the whole product, which makes those few single-player campaign moments like the underwater one, which stand out as examples of what the whole game should be like, so soul destroying. There’s life in the series yet, but not if it’s treated like this. Bring on Black Ops 3 and Treyarch’s vision for the series’ future.