Disjointed is probably the best way to describe BioWare’s Anthem; the latest grand sci-fi epic from the Mass Effect, Dragon Age, and veteran role-playing studio. A clear departure, Anthem attempts to fit into what we’ve come to know as the ‘looter shooter’ genre. That style of game where action-RPG mechanics combine with shooter-style action, and players get rewarded with better gear and shinier loot the more they play. Using this cycle as an incentive to head back out into a large online world, alone or with friends, to face new challenges and grow more powerful – long after the story is over. That’s the plan anyway.

How Anthem fits into this mould is strange and confusing because it ultimately fails to embrace or even figure out how to properly merge its two sides. With the first being Anthem’s deep co-op action ambition, an experience driven by progressing abilities and improving gear loadouts of the various playable Javelins at your disposal. The ‘looter shooter’ side. And second, as a brand new BioWare IP that introduces new characters, a new world, and rich story. From the creators of Baldur’s Gate, and so on. One that seemingly will evolve and change over time, in true 21st century fashion. Or, for the more cynical – as a live service. 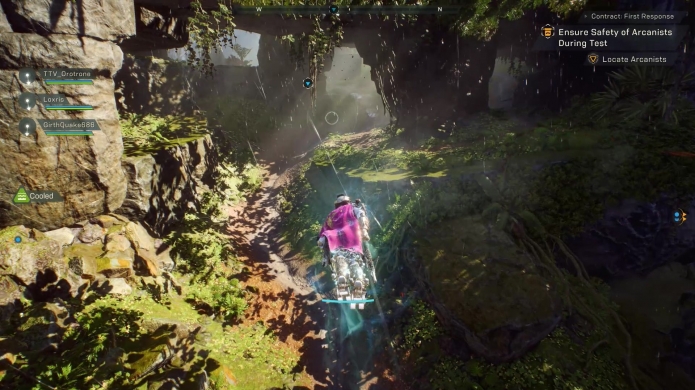 It’s in that second part where Anthem disappoints the most. The first part is probably the easiest to improve over time. The campaign in Anthem, or journey, is not presented as a big world shared with other players or Freelancers, but instead as a stilted single-player tale told mostly through face-to-face conversations. In that non-playable characters will often stand motionless, talking at you The Chosen Freelancer. With only a handful of sequences that provide genuine cinematic thrill or even notable animation work, Anthem fails to be engaging for most of its ‘save the world’ story.

"The campaign in Anthem, or journey, is not presented as a big world shared with other players or Freelancers, but instead as a stilted single-player tale told mostly through face-to-face conversations."

The illusion of choice is at its most fragile here too, with BioWare’s renown ability to inject morality into its tales a mere inconsequential shadow. Characters both engaging and not have their own stories that progress along the main campaign, but dialogue choices bear no real weight outside of a few minor examples. One of which concerns a potential spy in the game’s main hub of Fort Tarsis. What’s even more disappointing is that this static, lifeless nature of the narrative affects and detracts from Anthem as a co-op action shooter. The good stuff. 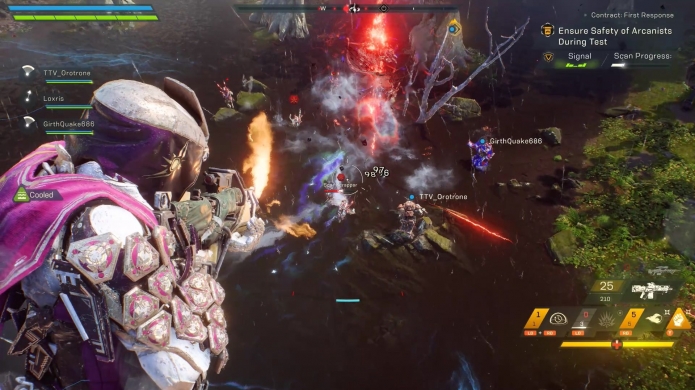 Friends or random players in your party during a mission? Voice-less bots for the most part, not essential to your story or even acknowledged narratively. Anthem makes no attempt to weave its online, co-operative, or PvE nature – at launch – into any part of its story. The main city hub of Fort Tarsis is simply not conducive to playing in a group. Everyone sits in their own instance, and due to the sheer number of mostly lifeless conversations to engage in – a squad will never be in sync. An unfortunate outcome that extends to the current repetitive endgame.

It’s baffling, especially coming from a studio known for story. For all the interesting lore and intrigue of the world, most of it is hidden behind layers of library entries that players shouldn’t have to read through. Context-free lore, without following that basic principle of showing not telling. Figuring out exactly what the Anthem is, who the Scar are, the Dominion, not to mention the random names of people and places you’re bombarded with during in-mission chatter requires patience and a willingness to read and take notes. For those delving into this side of Anthem there’s a lot to find, genuinely fascinating stuff too. But, again, only a fraction of it makes its way into the overarching story proper. 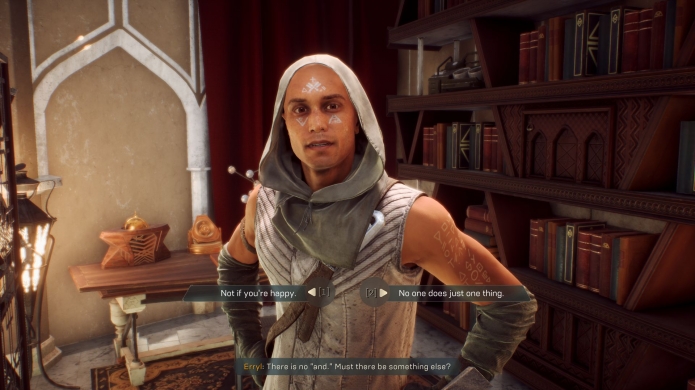 For everyone else, Anthem’s story presents the usual stop the big bad from activating the powerful thing. Albeit with a big-bad that features no depth or nuance. Very un-BioWare.

"For all the interesting lore and intrigue of the world, most of it is hidden behind layers of library entries that players shouldn’t have to read through."

The action though, and the Javelin mechanics, are both Anthem’s saving grace. With the fluid movement of the Javelins and the ability-based combat that lets players combo off their own skills or those of their squad offering a brisk and bombastic feel that often feels unlike anything else. In the best possible way. In fact, combat in Anthem places as much emphasis on well-timed ability use as it does shooting – with quick cooldowns and a variety of skills to mix and match. A clear distinction between the various classes of Javelins and the weapons that might suit them best adds incentive to head back out in ways that the story doesn’t.

The elemental Storm class can be played from high-above, hovering and dispensing large fire and ice-based attacks. The Interceptor, runs fast, can triple jump and be used as a melee assassin. 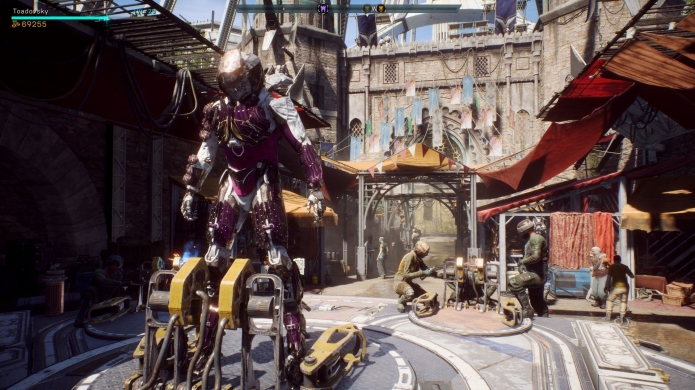 The little details here also impress. With the heat of a Javelin suit dictating how long or high they can fly. Going straight up means a hotter burn, skimming waterfalls will cool you down, and going underwater adds a true sense of awe and freedom of movement. You can also fly longer when it’s raining. But even this part of the experience feels disjointed as it’s broken up by arbitrary barriers and load-screens and a UI philosophy that opts for style over usability or function. A few examples. You can’t place a waypoint on a map, downed squad members are only visible if you notice the tiny icon amid the visual chaos, key mission objectives and challenges can be buried in a sub-menu of a sub-menu of a sub-menu.

Mission design itself lacks ambition, rarely calling on what makes each Javelin feel great to pilot and manoeuvre and call destruction down upon enemies. Like the story, there are a few exceptions and thrilling missions to be found – but overall the structure follows one of two setups. Go collect things and bring them back over here or stay here and defend this spot from hordes of enemies for a few minutes. Now here’s a boss. Enemies also weirdly and almost exclusively spawn in via mysterious relics, separating the moment to moment action from the stunning world you get to explore. 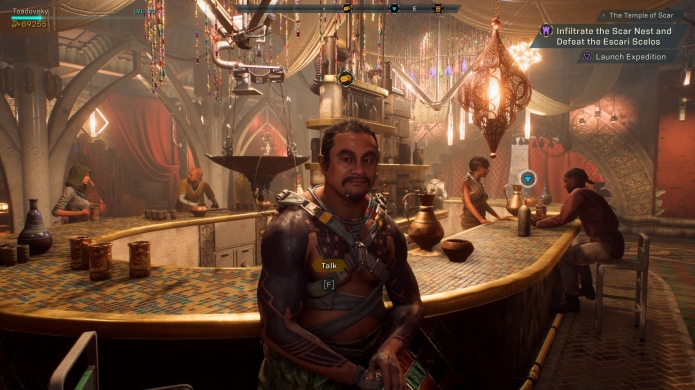 Taking place on the mysterious planet called Bastion, Anthem’s in-game environments are indeed stunning. From ancient overgrown ruins, to giant temples, waterfalls and river-beds, and volcanic lakes, everything is brought together with a verticality that sets it apart from anything you’ve played before. Anthem’s Bastion can make even the most impressive open-world role-playing games with mountainous regions look flat in comparison. It’s a staggering technical achievement too, one that is brimming with life and detail no matter the current time of day or weather pattern.

"From ancient overgrown ruins, to giant temples, waterfalls and river-beds, and volcanic lakes, everything is brought together with a verticality that sets it apart from anything you’ve played before. "

The only downside being that it quickly becomes an embarrassment of riches, with little to offer in the way of variety. And even though there are cave systems, a few large installations, and gorgeous underwater sojourns full of glowing alien wonders – the wonder soon fades. In a way it’s like looking at a fleet of red Ferraris. No matter whether it’s sunny or cloudy or raining, you’ll soon wonder where the other colours might be. The different makes. The biomes. The desert that’s hinted at in Anthem’s lore, the volcanic region limited to a linear level. 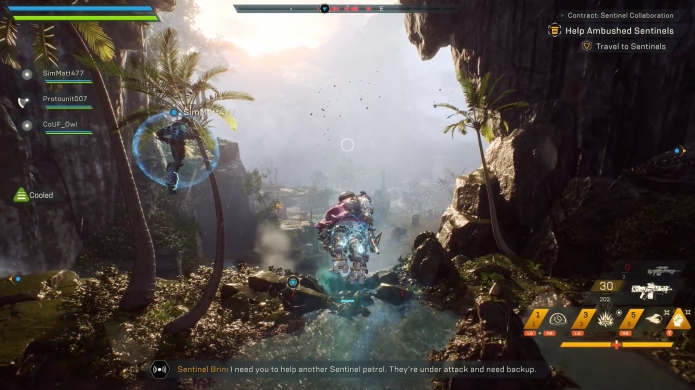 Another aspect where Anthem falls short is in the loot and gear stakes - which fails to live up to the more staple trends we’ve seen across the Destiny’s of the world and action-RPGs in general. Without a PvP mode, BioWare has opted to relegate the best and all the genuinely interesting items and weapons to the endgame. But even so there’s no feeling of becoming truly powerful or god-like. For the most part Anthem offers up the same handful of weapons and components to equip for dozens of hours, all with slightly higher numbers. Numbers that fail to communicate meaning due to no stat sheet or in-depth look at your character or Javelin.

Not being able to see just what a blue or purple diamond drop is until you exit the play area, or even switch out a weapon outside of combat are two of many baffling design decisions. When it comes to the loot game, you’re at least three loading screens away from completing even the most basic task.

What keeps Anthem from being a complete misfire, and firmly in the region of ‘good’ is the combat flow and the Javelin mechanics. Something that admittedly kept us actively engaged with Anthem for the duration of the twenty or so hour campaign. The simple act of flying around at notable speed is pulled off so well that you’ll begin to visualise future superhero games borrowing the mechanic outright. This movement and the subsequent ability-based combat goes hand in hand with the brilliant verticality and complexity of Bastion, offering several glimpses into what could have been another BioWare developed classic.

It’s a shame then that everything surrounding this core feels so disjointed. A story that lacks momentum outside of a few moments, mission design that reveals all its nuance in a matter of minutes, and a cumbersome progression system interrupted by walls. The large concrete barrier surrounding Fort Tarsis should feature the inscription – ‘Still Under Construction. Enter to find arbitrary loading screens, hidden menus, key information buried within library entries, and loot that does little to inspire’. A somewhat harsh judgement but one reinforced by the Fort itself, an eerily quiet hub where both the market and bar you visit featuring little more than a few whispers of life. Back to flying then.
Latest Comments
Link