We chat to Hangar 13 about the upcoming remake of 2002 classic Mafia, its beginnings, what’s new, the connection to Mafia II and III and how the team will address the problem of racing.
Mafia: Definitive Edition Interview
Diablo 4 - Blizzard on the Technology Behind Sanctuary, Making Your Character Unique, Trading, and PvP
Post by KostaAndreadis @ 12:59pm 25/11/19 | Comments
The second part of our big Diablo IV interview with Game Director Luis Barriga and Art Director John Mueller.

Diablo IV retains the classic isometric perspective that debuted with the series back at the turn of the millennium, which in the process defined the action-RPG genre. In Diablo IV, thanks to its brand-new engine, this traditional presentation will change in subtle ways.

“We have those moments where we play with the perspective a little bit to either show you a landmark or a vista and stuff like that,” Luis Barriga, Game Director on Diablo IV at Blizzard tells me. “And then when it comes to a World Boss, we zoom out the camera out quite a distance to put you in the same space with 12 other players. That will be rare in the live game, but we included it in the demo to ensure everyone got to see it.” 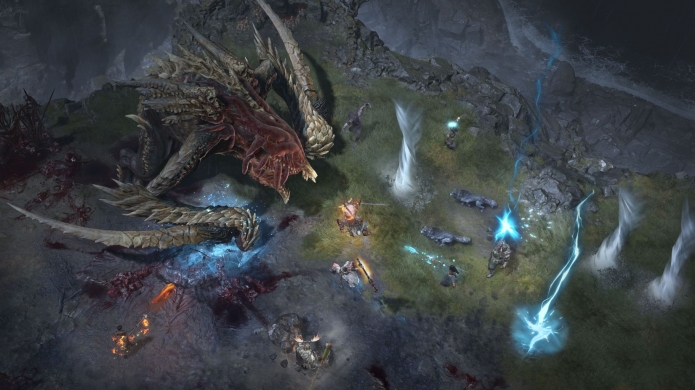 This taste of what a World Boss encounter or large-scale multiplayer event might look like in Diablo IV was seamless in the demo, the camera pulling back to reveal a large imposing demon called Ashava. New players appearing, and a big battle then taking place. Even though the encounter was sped up considerably for the demo, it was a chance for all to see this new dynamic camera arriving as part of Diablo IV.

“When it comes to a World Boss, we zoom out the camera out quite a distance to put you in the same space with 12 other players.”


On the cinematic side of the equation, Diablo IV will feature several real-time cut-scenes where players will get to see their character and gear up close. From squirming through a tunnel passing the skeletal remains of past adventurers to potential action sequences and quiet character moments. This new approach to storytelling in Sanctuary led to another evolution in Diablo IV – detailed and extensive character customisation. On a pure visual level.

“Every Diablo game has added to this feature,” John Mueller, Diablo IV’s Art Director explains. “Going back to the original Diablo there wasn't much of a choice, but with Diablo II you had lots of very different looking classes. And then with Diablo III, you had a choice of gender. We felt that Diablo IV should continue that tradition and go deeper, especially because it's a shared open-world you can explore. If you saw the same Barbarian everywhere that wouldn't feel very good.” 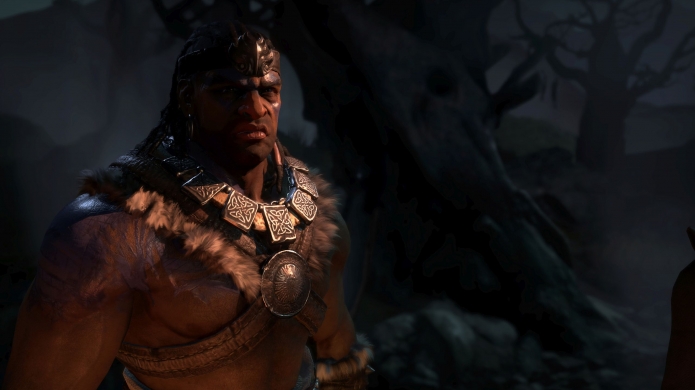 “We really leaned into it too,” Jon continues. “Because of the many cinematic moments where your character is in the scene. On that front it pays off in a cool way, going through and taking your time with character creation.”

This means adjusting facial features, hairstyles, scars, skin tone, make-up, jewellery, and many more aspects of your potential Barbarian, Sorceress, or Druid. Giving players options to create a character that feels like their own has been a big priority for the team, but as Luis notes – there are limits. “I've always been an advocate of having these options be curated by John Mueller. If you give me too many buttons and dials, I’ll break it and make it look as goofy as possible. So, we're making sure that we have options but that those options feel like they work together as one.”

“It's all part of the immersion,” John adds. “We don't want you to create someone that feels out of place in the world. That breaks that immersion and, ultimately, feels off. We always want it to feel like you're in a medieval town, which is why we have horses and not crazy high-fantasy mounts.” 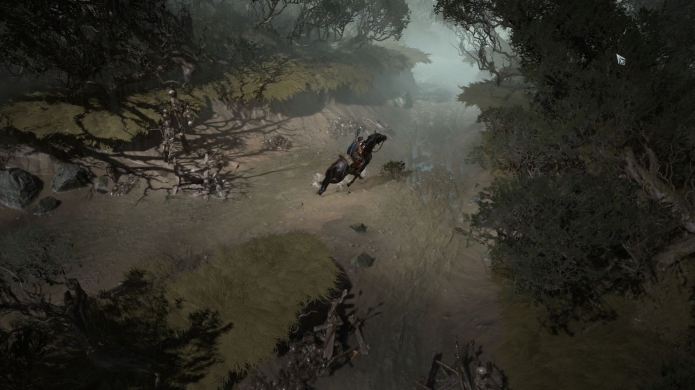 On that token the team at Blizzard have confirmed that due to the large nature of Diablo’s seamless open-world Sanctuary, players will be able to get around on horseback. And yes, horses will be able to be equipped with different cosmetic armour pieces and looks too. On the pure gameplay front each class will come equipped with a special dismount ability, one that highlights not only a focus on keeping the action fluid and responsive but the new in-depth animation system that has been created to support this philosophy.

“Tt's a shared open-world you can explore, if you saw the same Barbarian everywhere that wouldn't feel very good.”


“We've added a lot of animation technology,” John confirms. “Blending animation and having stop animations and having different animations make the movement feel very different than Diablo III. It's all increasing the resolution. And in action it makes the movement but feel more fluid, with stuff like character turns looking better than ever.”

Another element of Diablo which required the creation of a brand-new graphics engine, that will take advantage of physically-based rendering, was the implementation of dynamic weather and day-night cycles. Elements we’ve seen before, especially in open-world games, but in Diablo IV - the action-RPG - it’s something that becomes more than simple set dressing.

“When you cast Cataclysm [as the Druid], no matter what is going on in the world it brings the rain and storms with it,” John tells me, adding that you’ll also see puddles begin to form on ground. “Having the ability to dynamically change weather based on abilities is fun because there are a lot of things that we can do with that.”

Destruction also comes into play, where outside all the carefully placed pieces of pottery, Diablo IV’s environments will change in ways that haven’t been seen before in the series. “The sheer amount of destruction in our Dungeons has increased dramatically,” John adds. “When you’re in a space killing monsters and everything's smashed and breaking, you've essentially put your fingerprint on the world and changed it.”

Diablo IV was not built using the technology created for Diablo III, this overhaul of the visuals, graphics and animation required a brand-new approach. That said, things like say, how loot works, the complex mathematical systems and action-RPG mechanics that interact with each other can carry over between games. “With any endeavour you take your learnings and your tool-kits, and you simply upgrade them,” Luis explains. “Even though Diablo IV is an overhaul, there were little pieces of [Diablo III] tech that made sense to carry over into Diablo IV.”

“Destruction also comes into play, where outside all the carefully placed pieces of pottery, Diablo IV’s environments will change in ways that haven’t been seen before in the series.”


With one of these being the new evade ability, an evolution of the dodge-roll feature first seen in the console release of Diablo III. On PC, pressing the spacebar will Evade – causing your character to dash out of the way of an incoming attack or simply move into a different position in the most efficient way possible. Immediately it adds a new layer of strategic depth to Diablo combat.

“We got that in there very early and the inspiration did indeed come from Diablo III on console,” Luis recalls. “It’s one of the interesting examples where sometimes players think that we make compromises to get a game to work on console. This is a case where we brought the tactical element from the console release to inspire PC. We like it quite a bit, we like how it feels on mouse and keyboard and we also like it on controller.”

Luis notes that Diablo IV’s developments, is not platform specific. You can play the game on PC with a controller if you so choose, and the same-room couch co-op allure of the console world will carry across. Dipping further into Diablo’s history – and recognising the out-right failure of the Auction House as seen in the launch version of Diablo III – trading will make a return. Probably due to popular demand, but also to highlight and encourage the more social aspects of the game. Which will now include clans, banking, and other elements. But, as with anything related to in-game systems, currencies, and rarity around itemisation the team at Blizzard is treading very carefully.

“One of the things that we're doing with that is we're going to have three categories, items that can just be fully traded, items that become bound after being traded once, which helps control the economy, and then items that can never be traded because they're so powerful and special,” Luis explains. “And these are items we want to ensure you got from doing some sort of high skill or demanding activity. And with all that what we will have is knobs, so we can decide which buckets get filled, and how many items we put into each bucket. The hope is that when we're done filling and testing and iterating, players feel like they can trade a good number of items. But also, that many items they're wearing have come from their own exploits. Their own kills. That is a core value for us.”

“We want to avoid what we've seen in other games, including my experiences sometimes in Diablo II,” Luis continues. “Depending on how you play or what luck you have, sometimes you might be wearing head to toe gear that never dropped for you, it was all fully bartered for. We want to make sure that we are in control of those knobs. I feel pretty good that our balance team can adjust those knobs accordingly too, but it's still early days so I can't tell you which items go in which bucket.”

“We want to avoid what we've seen in other games, including my experiences sometimes in Diablo II.”


Also returning in Diablo IV will be PvP, which will come in the form of specific PvP zones. Areas that will by their very nature will feel more dangerous and hostile than others due the perceived threat of Nephalem gone rogue.

“Rather than being super balanced arena matches, it will be more reminiscent of Diablo II open games where someone might gank you,” Luis concludes. “We're not promising players that it will be a fair fight. John and I could run into you and we might murder you and being two versus one that’s not fair. There's no expectation that it will be finely tuned, but we are building the game with PvP in mind from the beginning. And that is because it's difficult to kind of back into PvP later.”

Thanks to Blizzard for taking the time to make this interview possible. Stay tuned for the final part of our Diablo IV discussion where we talk Legendaries, build philosophy, and the current state of the game.
Read more about Diablo 4 on the game page - we've got the latest news, screenshots, videos, and more!
Tweet