Where features like NVIDIA G-Sync, VRR, Dolby Vision, and full 4K 120 Hz HDMI 2.1 integration sit alongside LG’s excellent Game Optimiser mode.
We Review the New Brighter LG C2 4K OLED TV for 2022
Cyberpunk 2077 - Our Biggest Concerns (and Glaring Positives)
Post by Steve Farrelly @ 03:30am 24/08/18 | Comments
And believe me, there aren’t many. But at the end of both the E3 and Gamescom demos, CD Projekt RED asked for feedback via a paper survey. But we’ve decided to collate our favourite and ‘unsure’ parts of what we’ve been shown, so maybe they can get a more in-depth response on AusGamers’ part…


It felt like the ragdoll physics on a few corpses had no weight to them. That’s kind of all we have. Okay, actually, there also looks to be a number of scripted sequences (or maybe one) -- such as a car chase that is more an on-rails, arcade moment than it is a player-driven consequence of choice (which lasts all of 30-seconds). And we’re also concerned about the world, and its level of interactivity. Everything is neon and inviting -- but how much of it is ours to play with? And, will being locked out of total immersion in place of CDPR-directed interactivity, cheapen the world? Instead leveling it to a larger, shinier set-piece more than anything else? (We don’t think so, but it’s a question worth asking.)

In The Witcher 3: Wild Hunt, I came across a cabin ahead of activating the quest that took place in and around that cabin. And because I hadn’t activated it, it didn’t dynamically spawn (unlike some games that auto-activate quests before you trigger them, if you happen upon, say, the location of them). Which made finding it, the evidence of something fishy going on around it, but with no idea what it meant, a bit cheaper once I’d started the quest after reading a notification board and talking to some villagers, later on. 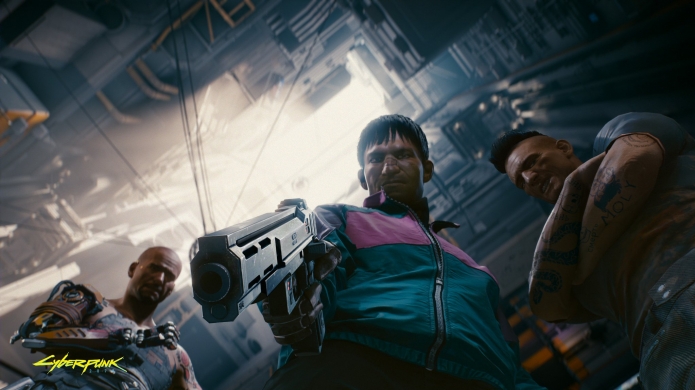 What worries me is this might still be the case with Cyberpunk 2077. (It won’t, but for the sake of holding back the grandstanding and having some level of objectivism around a game that has taken the industry by storm, while also putting other creators and publishers on notice, we need to consider: “but what if…”.)

What gives me optimism is that they’re asking for feedback, but given the polished state the game is already in, in trade demo form (visuals, systems, characters, writing, VO -- everything is there. We’re not seeing a vertical slice; I’m confident this is the game), it’s hard to assume it’s only a quarter of the way done.

What all this leads to is release date.

I hoped beyond measure that Gamescom would be the event they’d utilise to make a massive announcement. I even expected it next year, likely around November. (Naturally there were a couple of minor bugs in both demos -- but nothing worth describing.) It’s a very complete game from what they’re showing, and while this is a sprawling open-world action-RPG, with only around 50-minutes of it shown so far, we have to consider that by now, it is surface content-complete. Meaning most main stories, branching mission components, characters and more are at least locked down. The rest of development is hopefully polish, some minor additions here and there, and lots of cool marketing. But, I could also be very wrong and it is just a quarter of the game, and we’re in for a development long-haul. 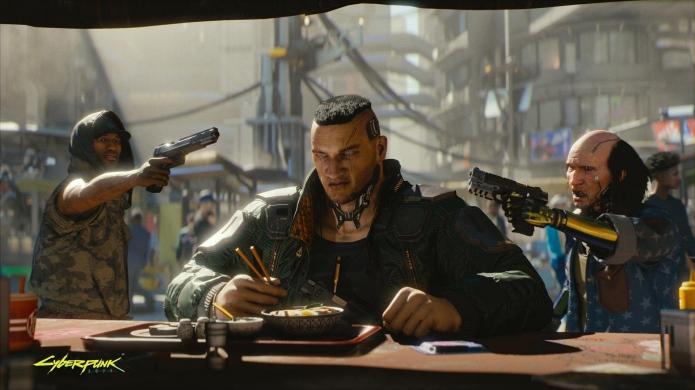 With those concerns above addressed, they also almost don’t matter in the grand scale of the game. This is the second time I’ve seen the 50-odd minute demo. At E3 we saw the game from the female character’s perspective, and at Gamescom we went with the male. Both are fully voiced in very, very complete ways and they react dynamically to the world around them; a bustling neon metropolis that is part Hong Kong and part dusty, grimy sun-soaked Los Angeles (thanks, Chad). There’s a sense of understanding what you’re seeing, but also a sense of being a foreigner, in a foreign place. Which is the point.

You’re attached to the world, too. Your own apartment -- complete with an arsenal ‘office’ (or ‘nook’, whichever) -- allows you to select your clothes (which have RPG stats attached to them, and look cool, because hey, this is an 80s-inspired ‘future’), check emails and do whatever else it is one would do in their own apartment (we haven’t seen enough of this yet, but we assume lots, and that maybe you also get better digs, the higher you climb). But it’s not just that, you also have appointments with people, you’re reputation grows around you and it seems like the world will dynamically react to that reputation with new and unique situations (missions) presenting themselves. We’ve also essentially been told that your reputation won’t always impress the right people -- there’s seemingly no neutrality here, though in contrast to the E3 demo, this time around CDPR did things a bit differently to highlight ways in which to get out of sticky situations, without violence. However, instead of accepting that last choice, there was still the option of a bit of the Ultraviolence, and they took it. 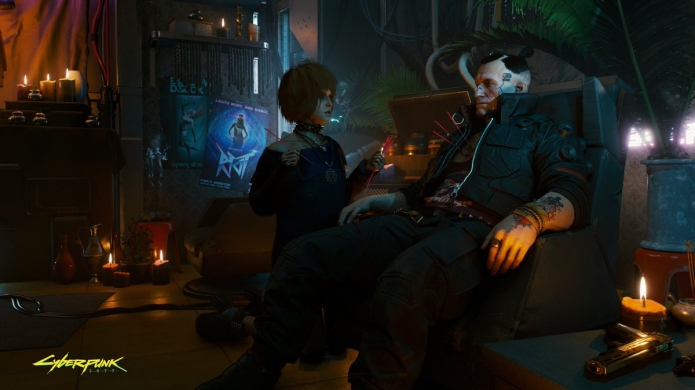 But knowing that there are varying ways to branch these situations (likely not always in a good, peaceful and calm manner) gives depth to how the systems and choices will affect your standing on the streets as a “Cyberpunk”. You have a partner, you can drive vehicles throughout the six districts. Interiors are beyond meaningful, and it’s not always guns ‘a blaze when you approach the more nefarious types in the game-world. Situations can be talked down, in contrast to, say, Fallout where you can’t negotiate with Raiders, for example. What permeates from all of this is a concept of ‘no stone left unturned’, in that CD Projekt RED has essentially just asked “what if they did this, or said this, or how would this person’s personality deal with this situation?”, and have come up with a tangential system for all of it, without it being overwhelming.

To say the game is multi-layered is almost an understatement. It’s a dense, multi-faceted experience that almost transcends the concept of a ‘videogame’, despite the studio steadfastly referring to it as a traditional open-world action-RPG. And despite it being based on a Pen & Paper series, what they’ve done here from both a visual and life-systems perspective is beyond next-level. And it's because of the presentation, and how complete it presents that we’re getting concerned about the minor things above -- the suggestions of world interactivity, its everlong reaction to you, and how branching and dynamic it all gets sort of seems, well, impossible. 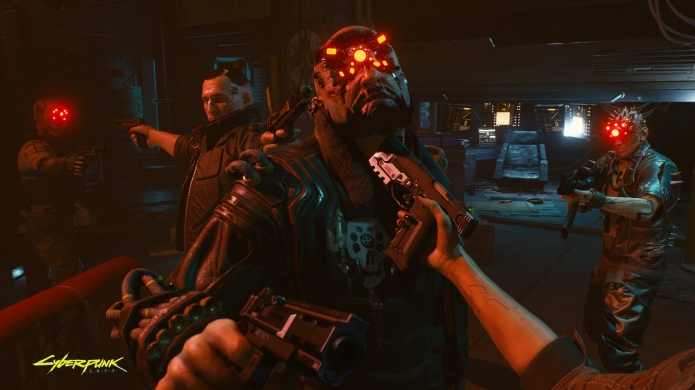 In Grand Theft Auto and Red Dead Redemption, Rockstar gives you tools, a world, and a story sans systemic dynamism. Essentially your mark on the world is dictated more by the cadence of the story and how far through that you get. That’s not a slight -- those cats are great at telling a story while giving players an open-world to play with. But until you progress actual story beats, the world itself resets and as long as you sleep and pay your debts, you can revisit areas with the full knowledge that what was once there, that you may have destroyed before you slept, will be safe and sound and ready for round two, come sun-up.

That’s because Rockstar’s games are built around a central concept of character and story progression in a world that brings those two things further to life, without hamstringing the character to rails. In a Bethesda Games Studios game, however, they go out of their way -- design-wise -- to have the player impact the game-world through decision and clearance. Rarely do ‘dungeons’ simply reset, and alliances are often definitive in how the world -- and its inhabitants -- perceive you. The mere concept of a single decision in-game locking you out of an entire quest branch with all the bells and whistles you’ll now miss, such as blowing up Megaton in Fallout 3, is almost tentpole design for Todd and co. But Cyberpunk 2077 sees these things, and cohesively marries them -- in 50-odd minutes -- in a way that simply hasn’t been done before. 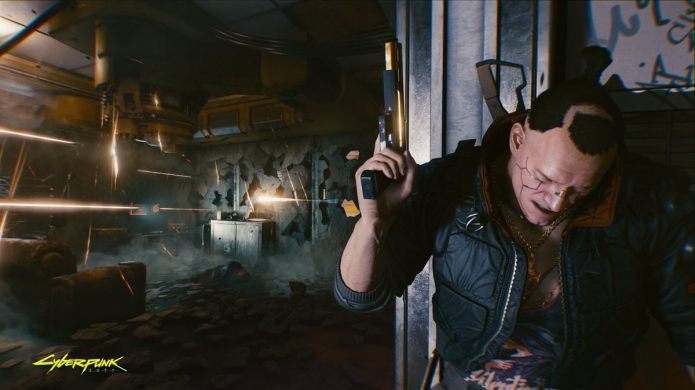 It’s clear they learnt a lot from The Witcher 3, and it seems out of place to just say “oh, this is The Witcher 3, meets Grand Theft Auto or Red Dead Redemption, meets Fallout or The Elder Scrolls”. The DNA of those games is here, because they are games; games that craft incredible, deep and varied experiences -- all of them. And they all seek a similar open-world experience the player can immerse themselves in. But I come back to this single concept of transcendency: the world of Cyberpunk 2077 does exist as an old-school Pen & Paper RPG. It’s about to become the most sought out and talked about videogame, of all time. It could easily be a movie. It could be a TV series (HBO, if you please). It could be books. It could be comics. It could be music. It could be a theatre production. It could be… anything.

Thankfully for us though, it’s a videogame. Now, CD Projekt RED -- about those ragdoll physics...

Read more about Cyberpunk 2077 on the game page - we've got the latest news, screenshots, videos, and more!
Tweet