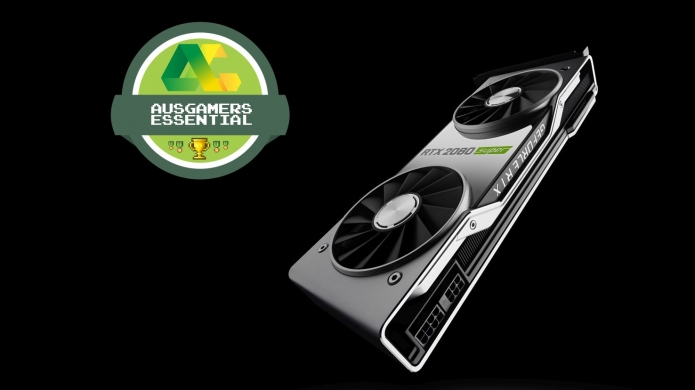 Also, words that are important to take into consideration because outside of the name the 2080 SUPER is not the top of the line RTX offering. That said, based on performance it certainly feels like it.

With the SUPER naming being a little weird in and of itself and almost silly in a “what else can we call these things other than slapping a Ti on the end?”, that doesn’t change the fact that we now have a more robust, versatile, and impressive range of graphics cards from Big Green. Especially with competition in the form of AMD’s new Radeon 5700 series joining the fray. The NVIDIA GeForce RTX 2080 SUPER offers up improved specs - essentially maxing out the potential of the Turing-based TU104 chip. Which also forms the basis of the NVIDIA GeForce RTX 2070 SUPER – the card that we’ll be referencing in our benchmark comparisons later on; as it most closely resembles the vanilla RTX 2080 that launched last year.

In terms of where the NVIDIA GeForce RTX 2080 SUPER sits, well, that’s clear. After you take a few things into account of course. This is a card that can run modern visually intensive games in both native 1440p and 4K with relative ease. And impressively so. It also reinforces the RTX line as the best option to experience cutting edge visual effects like real-time ray tracing – in a premium rendition worthy of the term ‘next-gen’. With current titles supporting the technology including Battlefield V and Metro Exodus and the likes of Remedy's Control and Call of Duty: Modern Warfare and others on the horizon, there’s a sense that the RTX line from NVIDIA offers a glimpse into the future. 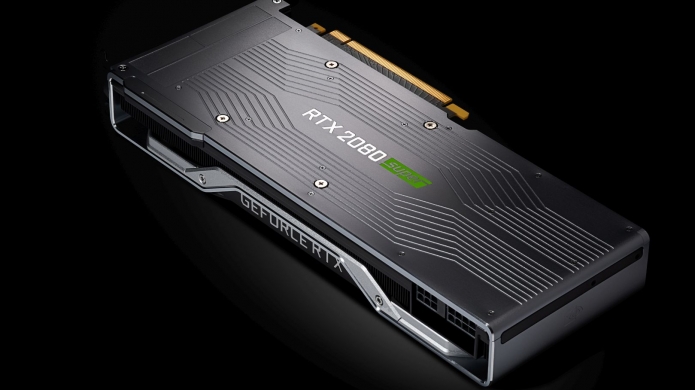 Compared to the 10-series GeForce GTX 1080 or 1080 Ti, the NVIDIA GeForce RTX 2080 SUPER comes out so far ahead that NVIDIA has opted to list the GeForce GTX Titan Xp as the card it most resembles and beats performance-wise. Leaks ahead of the RTX 2080 SUPER launch have also put its performance in the range of the TITAN V – an expensive bit of tech that cost $3,000 USD and is more prototype than actual consumer product. Again, this firmly places the RTX 2080 SUPER as a card meant for 1440p and 4K gaming. To pair it up with a 1080p display would be like, well, buying an expensive sports car and only using it to drive up to the local shops and back. Fun, but limited.


Compared to the original RTX 2080 the RTX 2080 SUPER offers up a bump in just about every conceivable category – including the power it eventually draws. The CUDA cores have seen an increase to 3072 from 2944, the base clock has jumped up to 1650 MHz from 1515 MHz, there’s a boost in total TFLOPS, memory bandwidth, and a couple of extra RT cores for improved ray tracing. On paper and then in-game this naturally leads to performance gains. And showcases NVIDIA’s attention to all aspects of the Turing architecture in crafting the SUPER line-up.

“Outside of the name the 2080 SUPER is not the top of the line RTX offering. That said, based on performance it certainly feels like it.”


Perhaps the best part of this redesign is that it replaces the existing RTX 2080 at the same price – with performance better suited to higher resolutions and more demanding titles. The question then of course becomes, “Well, how much of a performance boost does this 2080 SUPER provide?” The answer to that isn’t earth shattering – both the original RTX 2080 and RTX 2080 Ti are still brilliant in terms of capabilities. According to the official materials supplied by NVIDIA the RTX 2080 SUPER is 6% faster on average than the original RTX 2080. That said, this comparison is now a little off as the RTX 2070 SUPER is more in line with the original RTX 2080.

So then, how does it compare to its 70 SUPER sibling? Read on to find out. 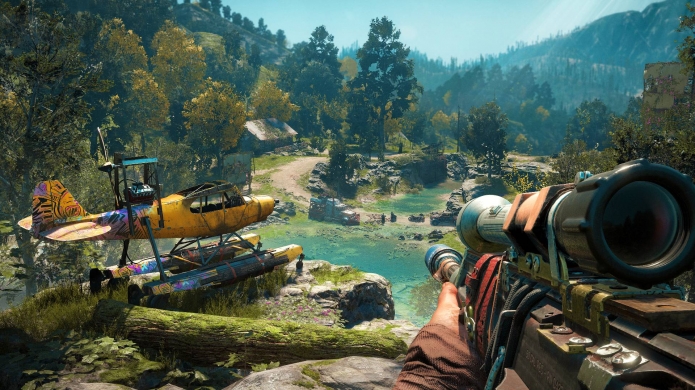 Before we dive into numbers and decimal points and percentages, we’ll paint a picture. A picture that’s basically a list of bits and pieces of PC hardware that make-up our current gaming rig – the same one we used to test the rest of the rest of the NVIDIA RTX SUPER range, so the comparisons between titles and performance gains between the RTX 2080 SUPER and the RTX 2070 SUPER are about as accurate as we could make them. Although we did have to update drivers to support the new RTX 2080 SUPER.

Okay, so you know how we said gaming at 1080p with the RTX 2080 SUPER was like doing that silly thing with an expensive sports car. Well, that’s reflected in the results. This means that compared to the RTX 2070 SUPER we found, on average, a 4% increase in overall 1080p performance. Yeah, not exactly amazing. Or, worth the raising of a single eyebrow. Only Forza Horizon 4 offered up a double digit 13% increase at Ultra settings over the 2070 SUPER. Which is a testament to just how well that game scales according to hardware and resolution. The Division 2 with Ultra settings also showcased a notable improvement over the 2070 SUPER with a 9% gain in performance – and as a DirectX 12 title Ubisoft’s action-shooter is a definite showcase for high-end PC gaming. Two titles where the GPU matters, no matter the resolution.

“The RTX 2080 SUPER is a card meant for 1440p and 4K gaming. To pair it up with a 1080p display would be like, well, buying an expensive sports car and only using it to drive up to the local shops and back. Fun, but limited.”


We found a similar 1080p story when comparing the RTX 2070 SUPER to the RTX 2060 SUPER – with single digit gains on average. And a few titles performing almost identically at this resolution. That said the 1080p performance across the entire RTX range is exceptional, so the story can be told and re-told in a positive light. And still worthy of an old-timey headline spoken by a kid with a cockney accent. “Extra! Extra! The NVIDIA RTX 2080 SUPER Declared 1080p Royalty by King George O’er at the Palace.”

Bumping things up to 1440p though, the current sweet spot for modern high-end PC gaming, and the RTX 2080 SUPER begins to knuckle down, tie it’s shoe-laces, and move ahead of the RTX SUPER pack.

Here the RTX 2080 SUPER showcases its difference to the RTX 2070 SUPER – which itself is a card that performs a lot like the original RTX 2080. As per the 1080p numbers, titles like Forza Horizon 4 and The Division 2 showcased the biggest improvements – with Forza performing a whopping 18% faster than the 2070 SUPER and The Division 2 at 12%. Across all titles tested the results here were in-line with the pre-release material provided by NVIDIA – with a performance increase on average sitting at 7% across all our tests. This paints the picture of the RTX 2080 SUPER being essentially a 1440p 60 frames-per-second card at a minimum. Impressive, most impressive. The drop-off in performance from 1080p to 1440p is similarly noteworthy, sitting at only 14%. At 4K the RTX 2080 SUPER comes into its own – with a 13% on average increase over RTX 2070 SUPER performance. Hitting 60 frames-per-second, natively, at this resolution is no easy thing – and something that previously was relegated to the far more expensive GeForce RTX 2080 Ti. Some minor tweaks might be required from title to title but seeing The Division 2 and Shadow of the Tomb Raider maintain a stable frame-rate in this range at 4K is an incredible sight. As is seeing DOOM (2016) hit triple-digits at 4K. More visually demanding titles like Metro Exodus run best with NVIDIA’s AI-based DLSS to get better 4K frame-rates. With Metro Exodus’s benchmark tool basically being the modern-day equivalent of “Can it run Crysis?”; pushing hardware to its absolute limit.

Testing the three main resolutions with the RTX 2080 SUPER and then looking at the 3D Mark results, and we get to see the same story become legend. Older titles, like the FireStrike test showcasing minor improvements over the RTX 2070 at 5%. Which then improves with the DirectX 12 based TimeSpy (at 9%) and again with the demanding ray traced demo that is 3D Mark’s Port Royal test – which resulted in a 13% higher score on the RTX 2080 SUPER versus the RTX 2070 SUPER. 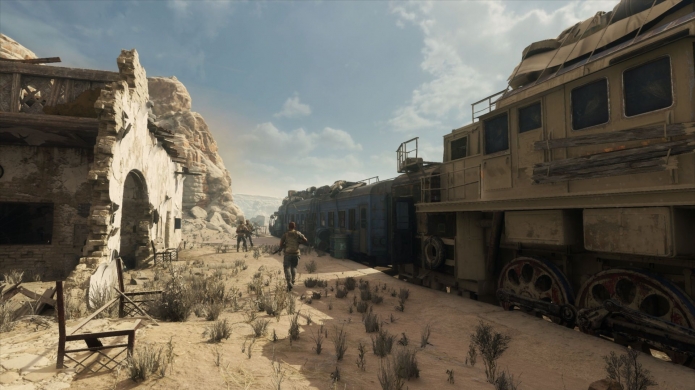 We’re now truly starting to see the benefits of the Turing architecture’s RT and Tensor cores – the stuff that has paved the way for real-time ray tracing and AI-driven rendering in titles like Battlefield V, Metro Exodus, and NVIDIA’s own Quake II RTX mod. As mentioned in the introduction the number of titles adopting the technology is set to increase in the coming months and well into next year. And on that front, it’s something that has matured considerably since making its debut late last year.

Capturing ray traced performance at 1080p at maximum or near-maximum visual settings we see the RTX 2080 SUPER offer up roughly a 10% improvement over the RTX 2070 SUPER – resulting in being able to support ray tracing at higher than 1080p resolutions, especially with DLSS enabled. When paired with NVIDIA’s DLSS rendering (which is best described as AI driven upscaling) the RTX line-up feels next-gen. It’s easy to forget was thought of as distant future stuff only a few years ago, is now a reality. 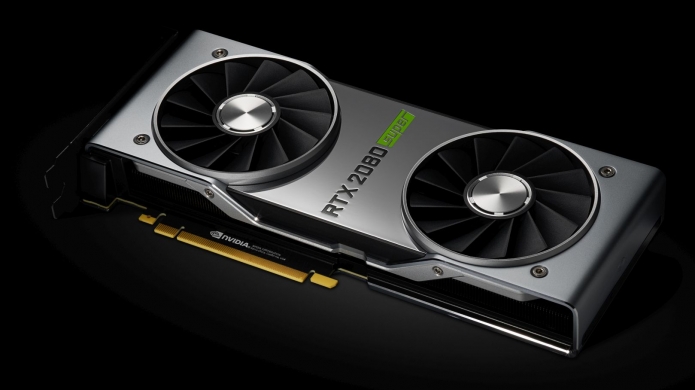 When looking at the new RTX line-up, now made up predominantly of SUPER cards – the picture is that of improved performance at either the same price, or less cost to the consumer. The RTX 2080 SUPER is no doubt an improvement, and an improvement on an already great card. One that is still very much a high-end product from NVIDIA. It’s a card for those with 4K displays or those looking to get the most out of a 144Hz 1440p one. Even though it doesn’t feel as revolutionary as when the original RTX 2080 launched, it’s hard not to be impressed by the Turing architecture and how the RTX range feels like a glimpse into the future.

“We’re now truly starting to see the benefits of the Turing architecture’s RT and Tensor cores – the stuff that has paved the way for real-time ray tracing and AI-driven rendering.”


Thanks to cutting edge visual effects like ray-tracing, AI-based rendering, and more under-the-hood stuff like NVIDIA’s impressive Adaptive Shading tech seen in games like Wolfenstein, the RTX 2080 SUPER will be on the cutting edge when it comes to PC gaming for a while. The all new 2019 RTX line-up is a formidable one, with an eye on both getting the most out of current games available to play and those that are on the horizon. It’s the sort of card you just know will have no problem running Cyberpunk 2077 with details turned up. And really, that’s about all we need to know.
Latest Comments
No comments currently exist. Be the first to comment!
Commenting has been locked for this item.
Follow Us
Latest Reviews
More...
News Feed
Advertisement
Latest Threads
Log In
Create Account | Lost your password?