In an age where the humble side-scroller has seen a massive resurgence through the Indie lens, in homage to, and lifted from, old-school game design (while also being a budgetary requirement for the little designers out there), we’ve watched unfold the future of game development as we know it. Bright-eyed greenhorn developers throwing creative weight around, often punching above their own kilos, yet with less emphasis on towing any Triple-A line; dealing with so-called “crunch” less it be self-inflicted, and somehow remaining as infectiously proud, optimistic and pragmatic as needed. Make no mistake, it is literally a dream come true for any fledgling designer or design team out there to see their game see the light of day.

In the case of Wildfire from Sneaky Bastards, this couldn’t be more reflected in the final product. The game itself has been brewing in a cauldron for years after a patchy start for the game’s visionary, Daniel Hindes -- a once fellow games journalist from Sydney, Australia, who was given marching orders from his post at Gamespot *because* he was developing a game. Still, the aforementioned optimism saw Sneaky Bastards pushing forward, culminating in a successful Kickstarter campaign, eventually landing a publisher in Humble Games and finally getting Wildfire into the hands of the witchtastic punter.

"And in true old-school design this ascends to mastering the collective elements: Fire, Water, Earth. From here, you’re given the option to bolster them as you see fit..."


Story in Wildfire is lite-on, in that it sets up recourse for your gainful employment of fantastical powers, kicking off with the titular ability to control fire. And in true old-school design this ascends to mastering the collective elements: Fire, Water, Earth. From here, you’re given the option to bolster them as you see fit through respective skilltrees (or lanes, really), while a Spirittree makes your mastery of witchery all the more powerful and fearful. There are passive buffs made possible through the collection of meteor shards, and in this way Wildfire presents itself equally as RPG-lite. “Lite” should not be considered detrimental in the scheme of the game’s progressive and progression systems; they serve a systemic purpose to combating tricky, and at times, genius level design, as well as agency in how you want to play the game.

While simple in its throwback pixel art style, Wildfire is in fact a deep affair riddled with choice and consequence. Sneaky Bastards as a “gaming collective” has always shown a love and reverence for stealth games. It’s how the name came about, and it’s the brand’s bread and butter. To this end, it’s easy to see collective influence pulled from various resources high in the genre. The likes of systems-heavy games such as Dishonored, Thief, Deus Ex and even Assassin’s Creed (to a smaller degree) coupled against level design that promotes stealth, but also comes with a risk of having it taken away from you creates dynamic situations -- some of which you might not have expected. And for a game presented in such a way to be as bold as to attempt to capture what more fleshed out 3D game-worlds akin to those mentioned above, to ostensibly pull it off… well, that’s a fine achievement indeed.

"Your village is thus burnt to cinder, and your kin taken as prisoners. Your only option as the only witch around able to brandish a palm full of fire is to seek revenge..."


So what’s the what? Well, a meteor has struck ground near your village. You investigate, it gives you a Twilight Zone flash, and all of sudden you can control fire. This is something known to the game’s key enemy, the Arch Duchess, and so she’s set out her army to not only find you, but to also bring an end to your ‘coven’, as it were. Your village is thus burnt to cinder, and your kin taken as prisoners. Your only option as the only witch around able to brandish a palm full of fire is to seek revenge while rescuing as many of your fellow villagers as possible in the process.

It sounds simple enough, and that’s also where the lite-on story sits, but as you progress through the game, Sneaky Bastards is smart enough to keep each level interesting and challenging. They also come with optional objectives that range from not being discovered to avoiding getting wet, not killing anyone and even beating dedicated speedrun times, among many more. It almost comes across as the sort of game these guys just wanted to play, and it’s in this approach that that much-earlier mentioned pride in design comes to fore -- Wildfire, in all its compact cuteness is a dedicated game to the craft of engagement and lateral thinking, all while keeping things equal parts fun and challenging.

"This is because the game’s systems are designed to mess with you, big time, in as much as they’re there for you to take advantage of..."


The AI is smarter than a lot of other games of this traditional style of design, and while much of your approach to each level is centred around learning patterns of behaviour and guarding, one foul slip up from you where not always predictable systems is concerned, can lead you down a charred path of not knowing what to expect next. This is because the game’s systems are designed to mess with you, big time, in as much as they’re there for you to take advantage of. You might have alerted a guard enough they’ve gone and took a swing at a patch of grass where they last thought you might be, removing that slice of cover, then in haste later on, you might forget that happened and think you’re out of plain sight when, in fact, you’re their next blade sharpness test. And in this game, their weapons Sir, will kill. 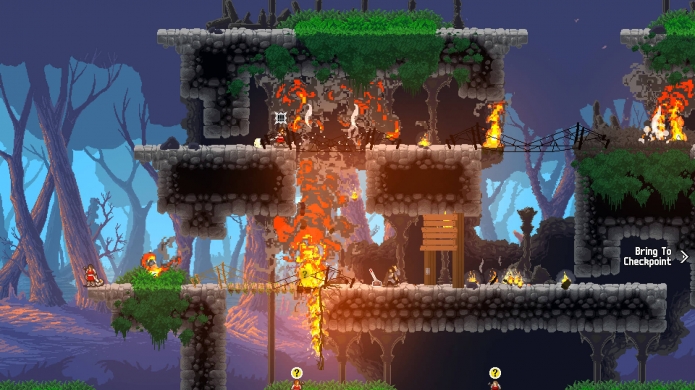 It’s difficult not to fall in love with Wildfire because it is a complete experience, despite its seemingly compact presentation and approach to art. There are issues to be had, however. Sometimes I found in-game messages being blocked by AI banter balloons, and other times I would get caught at the top of a vine not being able to either climb back down or jump up quickly enough to avoid either being spotted or worse, hacked down. And these moments induce ventilating panic at an alarming rate because the game is equally rigid in how it responds to you no longer hiding and casting fear and triumph from the shadows. That said, it only takes a handful of tries across each level and through experimentation to chalk up at least another doorway to the next part of the game-world. This way, the game is linear, though you can go back and retry any level you like for both Achievements and more points to divvy into your powers.

"Hopefully all the fanfare and positive critical reception the game has received so far continues, and we see it go beyond even Sneaky Bastards’ own expectations..."


On both the surface and deep within, Wildfire is a success, and we definitely see this as a franchise in-waiting. Hopefully all the fanfare and positive critical reception the game has received so far continues, and we see it go beyond even Sneaky Bastards’ own expectations. There’s room for it to land on consoles down the track too, where it would fit nicely. Especially having played it on PC using a controller (which I found more rewarding than the initial mouse and keyboard approach). But all of that will depend on how it’s openly received by punters now that it’s out in the wild.

Wildfire is available on both Steam and GOG now for less than $25 dollarydoos.