As the sequel to the surprise 2015 hit, and weirdly titled Warhammer: End Times – Vermintide, developer Fatshark has refined and polished its fantasy melee and ranged first-person co-op experience set in the Warhammer universe to such a degree that at times it feels like a miracle. In that after a few hours of slicing rat-men and Chaos hordes, you’ll notice that the Left 4 Dead 3-sized hole in your heart has begun filling up with the sweet nectar of a glowing green healing elixir. Make no mistake about it, Warhammer: Vermintide II is more than a loving homage to Valve’s classic – it’s one of the finest co-op action games in years.

It’s also the best example of the Warhammer license in game-form this side of Creative Assembly’s Total War: Warhammer. Which, when you consider the seemingly countless Warhammer games in development, is no small feat. The setting and world is used exceptionally well across the numerous missions and environments - which are not only technically impressive but also chock full of detail, lore, and intricate design. There’s a real sense of a world torn apart by war, and the immediate aftermath that an influx of both Skaven and Chaos forces can bring. Where the narrative doesn’t need much if any exposition - other than the in-game banter between characters to convey the immediate urgency of the situation. 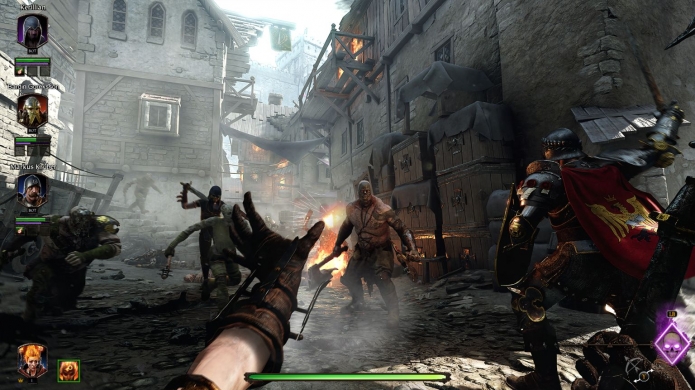 The linear progression and multiple pathways found in each stage or environment never feel confusing and being able to go from alleyways to caves and then a giant cathedral on top of a mountain sells the size and scope perfectly. The lack of a mini-map is refreshing without ever impacting your sense of direction. And this feeling of going on a journey, or quest, can be found in each of the 13 missions across the four thematic Acts. Where distant sites become large battle-grounds for tense stand-offs and descending deeper into the bowels of the earth open-up into complex, beautiful, and often horrific structures of impressive size. Locations never repeat themselves, with each mission offering a distinct slice of something new and different to both look at and experience.

Released on PC earlier a few months ago, the Xbox One version comes with Xbox One X enhancements that when viewed on a 4K HDR capable display like an LG OLED – look stunning. Not only in terms of technical features like resolution, texture quality, and lighting, but in the art direction that matches that stuff every step of the way. Warhammer: Vermintide II is one of the most visually impressive titles released so far this year, offering truly stunning sights.


Level-flow and logic, in addition to scope and technical ambition, is, well, better than ever for the series. It’s great to see that the actual game-part of the experience is just as impressive. With the fantasy, melee, and co-op sides coming together with the same Left 4 Dead inspiration and quality that drove the original. Playing through each mission as one of the five varied heroes offers the same level of randomness or controlled variety found in Valve’s classic, where enemy hordes attack in different locations, bosses-types switch, and a once hectic battle in a small farmhouse that you barely made it out alive can become a sanctuary to rest and heal-up the next time around. There are moments when the spawn locations of bosses or back-to-back hordes might feel a little cheap – but these instances are far and few between.

The playable heroes, returning from the original Vermintide now feature skill trees, passive abilities, and career options to vary their playstyle. Which, when combined with the revamped and far more user-friendly loot and gear system, means you can be a shadowy assassin Kerillian one mission and a waddling Dwarven titan of melee, Bardin Goreksson, the next. The new gear system essentially boils down to new items and weapons earned being given a Power Level that affects your overall Hero Power, which in turn dictates how much damage you do, stagger that gets applied with each hit, and how many enemies can be thwacked at once. Kind of like Destiny, but more subtle and gradual in its effect. All other stats, from health bonuses to crits and so forth are relegated to item traits and passives in a system that isn’t all that well explained in-game but quite easy to figure out. 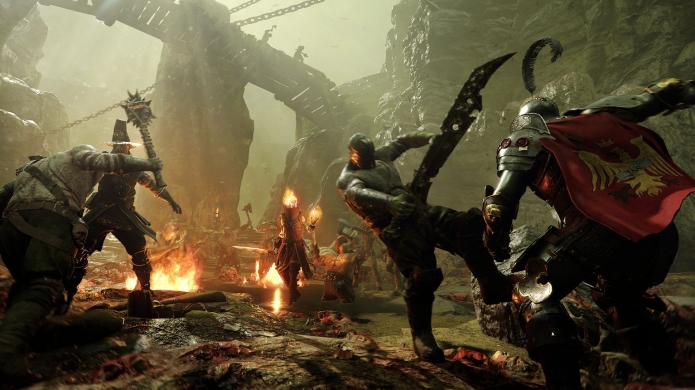 Unlike in the original where progress felt slow, a hero’s journey in Vermintide II is full of trying out different melee and ranged weapon combos to find the best fit, with plenty of rewards to sort through after each mission. Even crafting is simplified, so it won’t take long before you can increase the rarity of an axe you like or re-roll for different stats.

With as much a focus placed on melee combat as there is on ranged, Warhammer: Vermintide II features some of the most satisfying impacts you’re likely to find in a 2018 video-game. Whether that’s cutting down hordes of Skaven or lopping the head or limbs off a charging Chaos Marauder. The sheer gore is both in-line with the setting while also being of the fun, over-the-top variety. When you can cut an enemy in two at the ankle level and their feet remain planted on the ground, it’s hard not to crack a smile. Similarly, the ranged feel is just as impressive and across the wide variety of bows and old-timey revolvers head-shots and other up-close projectile-based takedowns highlight the exceptional animation in Vermintide II. And more importantly, the skill-based combat. 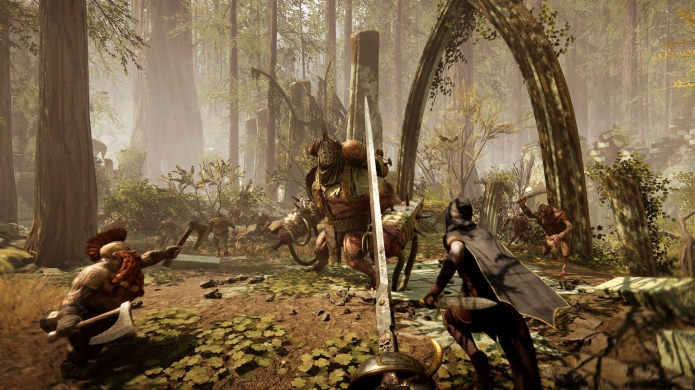 And it’s here where Warhammer: Vermintide II’s overall design and mechanics find themselves on par with the wonderfully varied and often stunning missions. Even though there’s a deep and rewarding RPG-lite customisation system in place, it still comes down to strategy, working as a team, and being, well, good enough to takedown a Spawn of Chaos when your team’s back is literally against the wall. And then survive whatever end-game scenario a mission might throw at you. With various difficulties to tackle and work through, secrets items to find that affect loot quality while offering additional challenge, in addition to the large and mostly accommodating community - Warhammer: Vermintide II is a must for fans of co-op. Or, anyone still holding out for Left 4 Dead 3.
Latest Comments
Link