At its core Vampyr has an intriguing hook and setting. You take control of a renowned doctor who has recently been turned into a vampire, in a post World War 1 London plagued by the terrifying Spanish Flu epidemic. As a doctor do you protect those you swore to help, or do you give in to your primal vampiric instincts? With ambition to spare, Vampyr is a largely lackluster experience that fails to bring its various elements together into a cohesive and fun game. But despite its many failings, it has a ton of heart and by the end I became heavily invested in this curious and intricate Victorian era supernatural drama.

Based on the above premise and genre, one might picture Vampyr as a third person action-RPG filled with turning others into tasty blood filled snacks, gaining fun vampire abilities, and lurking through the moon-lit streets of London. To be fair, a lot of the game is exactly that, but those are its least interesting aspects. The real depth and intrigue comes through the investigations that lead you through the story, and the many, many conversations you have with the various down to earth and surprisingly believable characters populating the world. 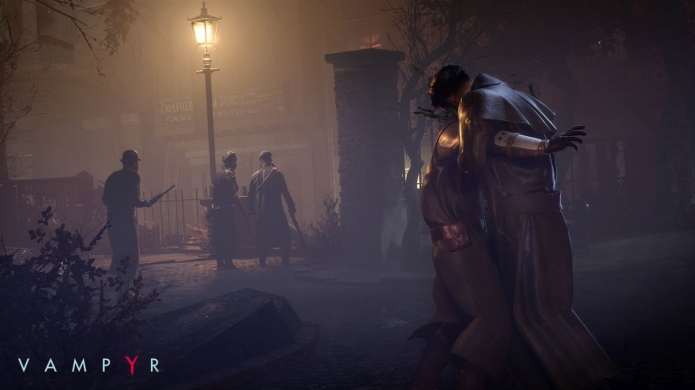 Revolving around world famous doctor and convenient blood transfusion expert Dr. Jonathan Reid, the story follows his pursuit of the vampire who transformed him whilst also trying to find a cure for the epidemic destroying the city. It’s a saga that has a slow start, with both pacing and tonal issues throughout. But over time, it builds into an engaging adventure. Exploring well known districts of London, learning about the politics of the vampire world, and slowly discovering the greater powers at play behind the scenes. Importantly, your choices have an impact on the story and the world around you. But are often limited to the short term, as decisions you make don’t feel like they really impact the outcome.

At its heart though, the story presented in Vampyr is about the citizens you meet throughout your investigations and how they’re all connected in some way. Small touches that not only add depth, but make up a majority of the reasons to keep playing. Some of the citizens you meet might be shady doctors and brilliant nurses at the local hospital you find yourself the night manager for. Others may be immigrants trying to get by and survive in the less reputable ghetto Whitechapel has become. Or, high class members of the West End - the sort of rich snobs more interested in tea-time than addressing the many issues terrorising the city. Some act as shopkeepers, others quest givers. But regardless of profession or social standing each have secrets and information to share. Stuff that may help with one of your investigations - or simply be there to flesh out the complex and intricate world. 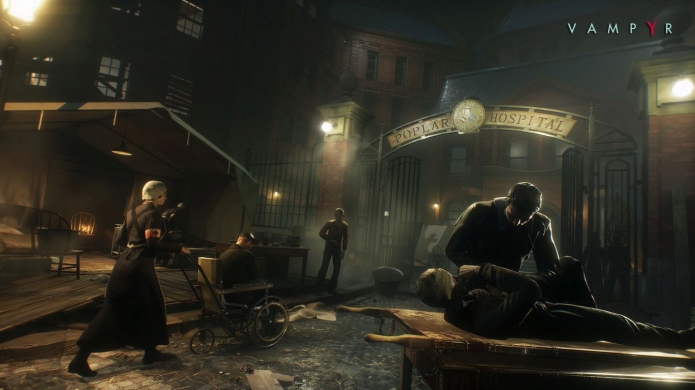 The amount of conversations you need to have to fully explore each character or storyline can get a bit tiresome. Thankfully, most of the dialogue is well written and the voice acting across the cast is mostly great. Your conversations and investigations also subtly explore important themes throughout. From immigration and the poor treatment of asylum seekers, to homophobia and accepting sexual preferences, sexism in the workplace, and class warfare. How these subjects are navigated never feels heavy handed or explicit, since they evolve through your relationships and conversations far more naturally than in most games.

Unfortunately, these characters who are impressively connected and intertwined with the overall story, are let down by poorly implemented RPG mechanics, monotonous combat, an overly bland world and a dull evil pathway. For the most part Vampyr is far too easy and a boring drag between conversations and story events. There is never a lack of resources to upgrade weapons or craft medicine to heal members of each district, so the threat of characters dying from illness doesn’t really exist. Instead these elements were just frustrating and annoying, due to the amount of time I spent running back and forth through the dark and hard to navigate streets, to heal people who will just get sick again two nights later. 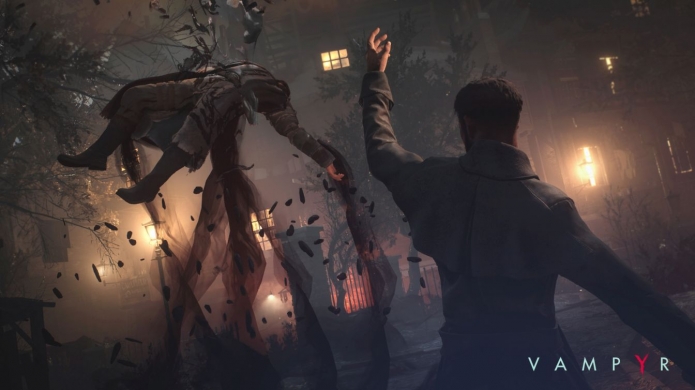 In regards to the combat, it's fairly straightforward and average for an action-RPG. There isn’t much variation in enemy types and the mostly predictable and dumb AI ensures it all becomes a mediocre and monotonous affair. While some fights can be a challenge when you’re surrounded by several enemies, they all have that one weakness, whether that be to guns, melee attacks, or vampire abilities. As long as you fight according to weaknesses, you’ll generally fly through most encounters. This includes the boss fights too, which are mundane events as they mostly only have one or two attacks and are weak to guns; a few shotgun blasts and they’re down.

You can mix it up with various vampire abilities and tactics, as Vampyr allows you to redistribute your experience points into different abilities at any time, allowing for the testing of different tactics and styles without punishment. But after fight number 142 against the same boring enemy types with poor AI, I was far more interested in just moving on. There are also several different types of weapons to be found that can be upgraded to add more variation, but again it doesn’t matter much thanks to the monotony of combat. It doesn’t help that you’ll be traveling through the same similar dark and dull looking streets. There is detail to be found with the world, but outside of a few unique areas, Vampyr’s Victorian era London is repetitive and uninteresting. 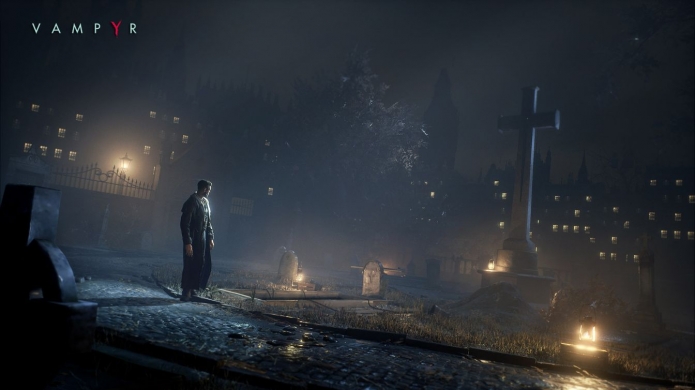 Another element holding Vampyr back is its host of technical issues, which I encountered throughout my playthrough on Xbox One. From textures popping in constantly, to worrying frame-rate drops and even textures and sound effects not loading or playing during combat. Altogether these issues don’t break the game, but they do regularly break the immersion while walking through the dark streets of London. More annoying however, are the long load times. You can traverse a majority of the world without ever seeing them, and they only occur when entering specific buildings, after dying, or for story transitions. But my lord they are long - averaging 30-45 seconds. Making waits between multiple deaths during a tough fight or moving between multiple buildings at once frustrating. Vampyr lacks polish and optimisation on Xbox One, and regularly reminds you that you’re are playing a sub-par action-RPG.

Vampyr attempts to bring several systems together which in the end all feel separate and not part of a singular action-RPG experience. This includes the difficulty and morality systems, which are meant to be integral. Vampyr doesn’t have difficulty settings, instead the lower your level, the harder enemies and the game will be. The easiest way to level up and gain vampire abilities, which will help you overcome the tougher obstacles, is through killing and drinking the blood of the mortal characters you come across. An interesting concept that doesn’t quite gel with the mechanics. To get the most experience from a kill, your target needs to be healthy and you need to have learnt everything you can about them (the reasoning for is never explained). During this process, Vampyr does its best to convince you not to embrace them, as you learn that each character actually has feelings, families and mostly meaningful roles within the world. And so the alternative is rather dull. 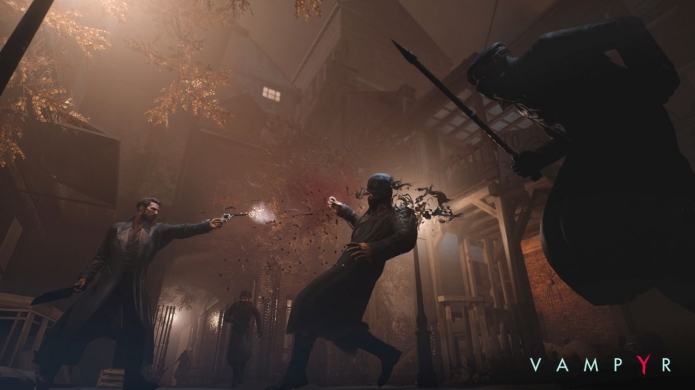 If you were to disregard the importance of characters and their lives, instead killing characters without disregard to gain your powers quicker, then each district in London will quickly collapse. This can have huge ramifications, causing harder monsters to plague the streets, people to disappear and missions be removed altogether. Again, an interesting concept but one that doesn’t quite work. Going down this path takes away the true heart and the most meaningful element of the game - its characters.

Without a majority of the characters, the time between the major story beats would be particularly dull without anyone to talk to or side quests to complete. To take the evil path and embrace the vampire side of Jonathan, is to kill what life there is in Vampyr. Although it is important that there are consequences to your actions, some of which do have an immediate impact to the world, there isn’t enough to balance it out and make being evil fun or interesting. It ultimately means being evil isn’t a worthwhile choice, as every system actively works against the player in this scenario and takes away from the best elements of the experience.
Latest Comments
No comments currently exist. Be the first to comment!
Commenting has been locked for this item.
Follow Us
Latest Reviews
More...
News Feed
Advertisement
Latest Threads
Log In
Create Account | Lost your password?