It wasn’t that long ago when Yuan Shao, the loud and brash leader of a somewhat formidable barbarian horde, offered up full autonomy if you became a vassal to his house and banner. To become a small part of his empire in a war-torn China beset by feuds and various houses scrambling for relevance and control. And ultimately, a say in who becomes the Emperor. With the ability to retain the freedom to move about and expand and trade with whomever you wish, autonomy and the support of a strong ally would no doubt have its benefits. But with Yuan Shao’s commandery located quite a distance to the north, where it would take months to send a convoy or even envoy, you reject the offer and quickly cast the idea aside.

A couple of years later you now find yourself laying siege to the city of Pengcheng off to the east, with an army headed up by your most trusted Generals. On a mission to destroy the provinces of Tao Ying, who murdered your father months earlier in a surprising bout of violence that shocked and alarmed both your family and council. And it’s during this crucial moment of seeking vengeance that Yuan Shao makes a surprise appearance. Well, one of his generals does as they encircle the Farmlands to the west of your main commandery in Chen. Your home. 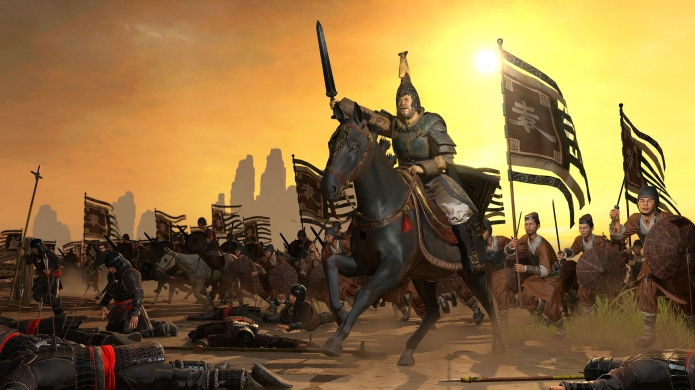 It’s a startling turn of events, and without any past aggression between your two factions you decide to try and broker a peace agreement. There’s simply no time to disengage, retreat, and face-off against Yuan Shao and Tao Ling’s forces. As it turns out, peace talks are exactly what Yuan Shao is expecting. With large armies and little in the way of income he’s essentially become a bully or extortionist. The cost for his forces to back off is just about all the gold your reserves with regular payments of both food and gold to be presented, on time, for several years. Infuriated and swearing vengeance, you agree to the terms and shift your focus back to the siege of Pengcheng.


The last pure historical entry in Creative Assembly’s long-running Total War series, was 2015’s Total War: Attila. An entertaining and minor advancement from the previous entry, 2013’s Total War: Rome II. In terms of size and scope Total War: Three Kingdoms is more Rome II than Atilla, in that even though the most obvious difference is the shift in focus to second century China - the overall experience is as grand and ambitious as anything that has come before.

As radical as changing the setting to the fantasy world of Warhammer, the first few hours of Total War: Three Kingdoms even for veterans - can be overwhelming. The shift towards diplomacy, relationships, character-driven battles and martial-art driven duels takes some getting used to. But when it all clicks, Three Kingdom begins to showcase its nuance, and wonderfully complex web of intrigue and history. 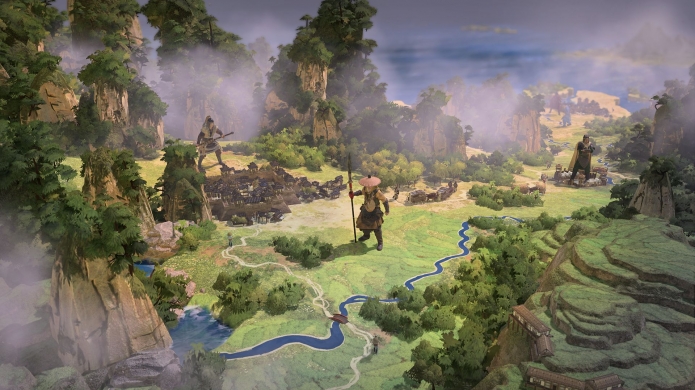 It’s clear and evident throughout the entirety of Three Kingdoms vibrant presentation, spectacular art direction and excellent music that it’s an entry that offers up a more romantic view of the time-period depicted. From its painterly approach to environment design and seasonal changes in weather, Three Kingdoms presents a truly beautiful depiction of mainland China. In addition to historical records, a large part of Total War: Three Kingdoms’ look and feel is based on the 14th century novel Romance of the Three Kingdoms. A source whose influences can be seen in films like Crouching Tiger, Hidden Dragon (2000), House of Flying Daggers (2004), and Red Cliff (2008). Where larger than life characters in a larger than life China engage in diplomacy, expansion, love, and unification. And conflict.

"From its painterly approach to environment design and seasonal changes in weather, Three Kingdoms presents a truly beautiful depiction of mainland China."


To alleviate some of the more radical shifts in design, especially with the core real-time combat, Creative Assembly offers up two ways to play through a Three Kingdoms campaign. When playing in ‘Romance’ mode, Generals are a near-indestructible god-like presence on the battlefield, where they can decimate entire squads and engage other Generals in kinetic one-on-one duels that the hundreds of nearby soldiers will respect and not interrupt. Where the outcomes can often dictate the overall victor. The more historical ‘Records’ mode does away with the deities on the battlefield approach, offering up traditional Total War-style battles and strategy. But, playing this way feels like the lesser of the two. 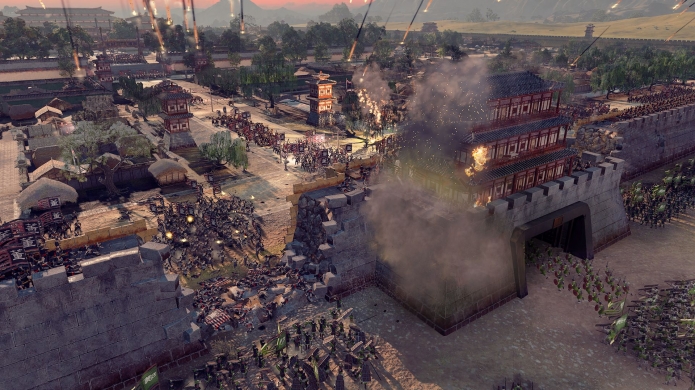 Romance feels truest to the core design and focus on diplomacy, your house’s family tree, councils, and all the various relationships. And the power and myth that comes from large-than-life leaders and warriors. There’s a cohesiveness to Total War: Three Kingdoms design and setup where every element feels natural and not simply there to pad out or fit into an existing mould.

Of course, these elements of diplomacy and even managing your faction’s hierarchy have appeared in some form or another in previous Total Wars, but never in ways that truly felt integral to the overall experience. Or, as engaging emotionally. In Three Kingdoms looking after your own council and family tree and managing their relationships with one another or what they think of your own leadership is as important as signing Non-Aggression Pacts with neighbouring factions. Agreeing to a marriage proposal not only has immediate ramifications in terms of solidifying a partnership or coalition but could potentially alter the course of history far into the unforeseeable future. 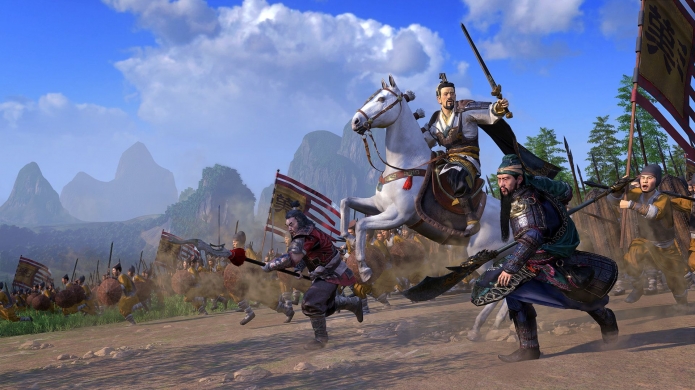 Relationships that cross faction lines add considerable weight to capturing a General after a particularly heated battle, and deciding whether to execute them, conscript them, or simply hold them for ransom has a flow on effect to who they’ve interacted with. And whether their closest allies or even children might hold a grudge and try to pay it back years down the road. Blended with the romantic visuals, wonderful art and character depictions, it quickly becomes intoxicating. Often, we found ourselves simply sitting there going through factional relationships, trying to gauge and plan moves one or ten years down the line, in ways we hadn’t done before in a Total War.

"There’s a cohesiveness to Total War: Three Kingdoms design and setup where every element feels natural and not simply there to pad out or fit into an existing mould."


This time around moving armies towards the nearest enemy border as you manage the happiness of your citizens and whether they’ve got enough food to eat, only makes up one part of the experience. 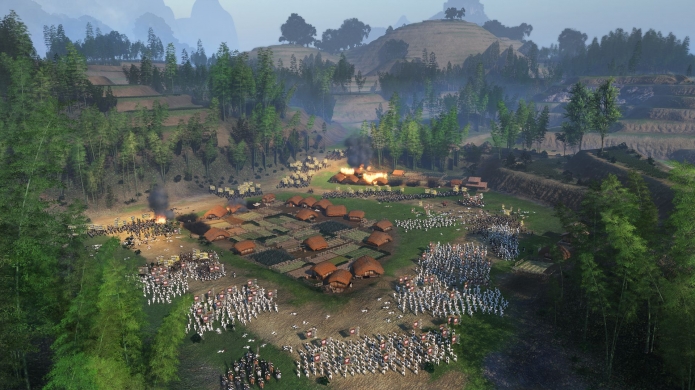 Where Three Kingdoms becomes brilliant is how it manages to tell both very personal and grand stories without focusing primarily on linear, scripted events and predictable progression. In a way that kind of makes it classic Total War, but the fact that it’s presents an emotionally engaging, deeply rewarding, and epic retelling of Chinese history through carefully tuned AI factions reacting to each other’s movements and your own – is commendable. Again, Three Kingdoms is initially overwhelming due to its sheer complexity. The need to properly understand just how each Grand Campaign mechanic is to put it mildly, time-consuming. But once it all clicks Three Kingdoms reveals itself as a Total War that gets better and better the more you play it.

Where the experience ultimately stumbles a bit comes where the innovation and changes are less present - and that is with the real-time battles. With a steady flow of releases and new entries this decade alone, even with the new duelling system found in Three Kingdoms, if you’re familiar with the Total War combat flow then there’s very little surprise to be found. The same strategies and formations will apply and outside of specific unit designs and nice little touches like squads carrying lanterns during night battles, it’s familiar to the point of feeling like a re-skin. The engine, from the numerous battles we fought, also looks and feels identical to the one seen across the recent Total War: Warhammer entries. 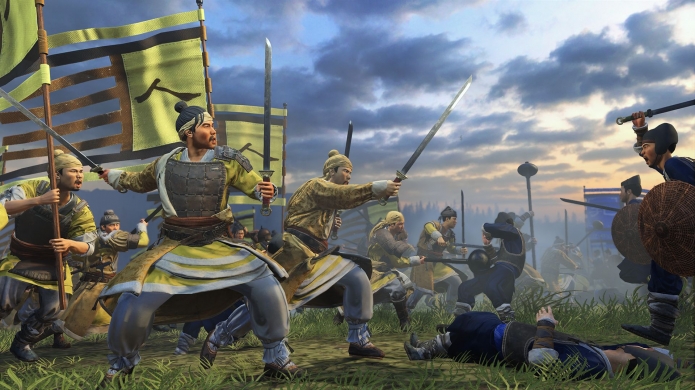 Now, this is not a terrible thing as this is Total War in its most bug-free launch state. Even though some of the animation quirks and ‘army blob battles’ and siege path-finding issues of the series can still be found. There’s just a feeling that perhaps a major shake-up is needed here too, as seen with the wonderful and in-depth diplomacy found in Three Kingdoms. In a way that’s perhaps more suited to the setting.

In the end, Total War: Three Kingdoms is essential for fans of Chinese history, the romantic depiction of the era, and all-round history buffs. The steep learning curve is well worth the time investment as the enhanced and expanded diplomacy and management side moves the series forward in meaningful ways.
Latest Comments
Link