Those silly, silly videogame terrorists, when will they ever learn? Any time there’s a little resurgence of insurgents good old Uncle Sam is there to police the world and save the day for truth, justice and the American way. Now I’m not talking about that doddering old bearded fogey with the stars and striped outfit pointing at you, telling you how much he wants you. Nope. I’m talking ‘bout Sam Fisher, the spy’s spy. The scourge of evildoers. The guy who taught Keyser Söze how to hide in plain sight. The super-spy who’s so bad-arse he makes Solid Snake flaccid. He’s the sneakiest bastard there is and in Splinter Cell: Blacklist he’s about to launch a one-man war on terror.

Let’s get this out of the way and rip the Band-Aid off immediately, Michael Ironside, the gruff and raspy voice of Sam Fisher you’ve come to know and love *pause for dramatic effect* doesn’t voice Sam in Splinter Cell: Blacklist. Now before you start shaking your fists at the heavens swearing Ubisoft Toronto shall rue the day it messed with your beloved Sam, I barely even noticed he was gone. Don’t get me wrong, I loves me some Ironside, but the thing is Splinter Cell: Blacklist is less about the man and more about the missions. Sure there’s some character development along the way, but the focus here is about eliminating the escalating terrorist threats in a myriad of ways and dealing with a cold, calculating and committed adversary who truly believes in his cause and is prepared to go to any lengths to make sure his message is heard loud and clear. It’s all about the bigger picture. 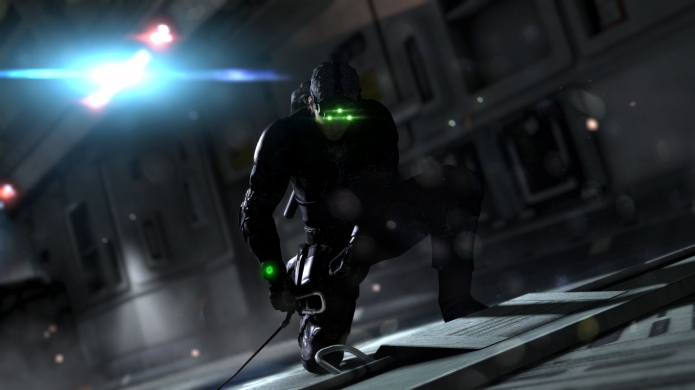 I can almost hear you thinking, terrorists? Really? That old chestnut again? Well you can stop those eyeballs rolling and stifle those snorts of derision right there. These are not your run of the mill kind of suicide bomber bad guys. Known only as The Engineers, this group has a specific purpose and only one desire, for the United States to send home its troops, from everywhere. It’s a simple and powerful sentiment made even more compelling by its charismatic and ruthless leader, Majid Sadiq (spectacularly voiced by Carlo Rota). An ex-British Intelligence agent he is capable, resilient and fully prepared to bring the entire United States to its knees if necessary. He is driven by this singular purpose and commands a contingent of sleeper cells waiting for their opportunity to strike. Until his demands are met he promises to wreak havoc on the Land of the Free with five specific events set to cripple the infrastructure and its population and, you guessed it, it’s up to Sam to save the day.

Things operate a little differently in Splinter Cell: Blacklist. After the corruption of The Third Echelon and its subsequent disbandment (as seen in Splinter Cell: Conviction), you’re now running the inventively renamed The Fourth Echelon, set up on a mobile base of operations, a massive jet named The Paladin, with a skeleton crew of specialists. There’s Isaac Briggs, your co-op partner from the CIA who you have a warm and fuzzy relationship with, kind of like sandpaper on sandpaper. There’s an old adversary, Korbin, who tried to kill Sam and his daughter (see Splinter Cell: Conviction). You’ve got your operations manager Anna 'Grim' Grímsdóttir, who you’ve also butted heads with in the past and the prerequisite techie-hacker guy Charlie Cole.

The Paladin acts as your HUD. You can upgrade The Paladin giving you various unlocks in the field such as longer radar range, black market weaponry, new-fangled prototypes or quicker heath regeneration. You’ve got a massive interactive computer known as the Strategic Mission Interface (SMI) which acts as the source and launchpad for all your missions, both single, co-op and multi-player. There’s even a riddle-centric world map exploring metagame to keep you noodle-scratching for more specialised unlocks.

Each member of your team is also an information and side mission dispenser, and they all make sense. You hit up Briggs for co-op missions and the rest of the crew give you bonus Fourth Echelon missions to earn a little bit of extra cash and to truly test your mettle. Korbin gives insight into the black market and shady customers the world would be a better place without. Charlie’s missions deal with the retrieval of sensitive information and Grim’s help cripple other smaller cell networks. You can tackle any of these missions on your own or with a buddy and I’ll get into how they handle a little bit later on, because I’m sure you’ve had enough of the foreplay and want me to get right down to it. 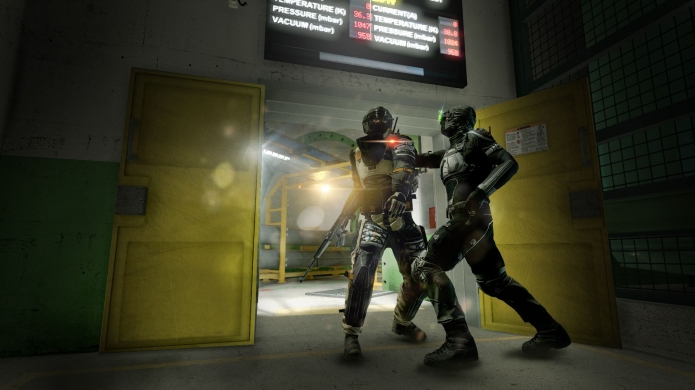 Ubisoft has made a big deal about how you can play Splinter Cell: Blacklist your own way, and it absolutely delivers on this promise, and even more so. Allow me to explain. Each mission awards you XP for the takedowns and play-style you favour. Want to use non-lethal attacks like sleeping gas, choke holds to put your enemies to beddy bye and stick to the shadows unseen? Then Ghost is up your alley. Prefer to make a lovely glorious mess and work on your expansive weaponry, lethality and explosive devices such as proximity mines and incendiary grenades and give that whole stealth thing the finger? Lock and load for Assault. For those that like to walk the line, embracing stealth with options and don’t mind getting their hands dirty when the situation arises you’ll be all sleek and deadly like a Panther, my favourite.

Do you want to be Jason Bourne, Seagal or a slick all-day ninja? You can pick and choose and even customise your loadout and clothing to support you, but it’s a give and take kind of deal. More armour means less stealth. Do you sacrifice weapon handling for silence? I think the way you’re going to play will surprise you, as I quickly found out (pro-tip regardless of play style upgrade your goggles to the max, it will allow you to see through walls and mark enemies and in general makes your life a hell of a lot easier).

You see, I’m not a traditional stealth guy. I don’t mind lying in wait in the dark and bringing the pain, but the whole ‘ghosting’ thing isn’t my bag. Here’s an example of what I like to do. You can place proximity mines, which deliver an electric charge, in puddles of water and let science do the work for you when some poor sap walks through (water and electricity don’t mix kiddies). But what would happen if you set that up and then, say, hit that sap with an incendiary grenade?

Would he frantically try to put the fire out? Maybe he’d spy that puddle of water, figure it was his salvation and try to roll around and put the flames out? He would. He did and rolled into a shockingly non-lethal flame driven electric takedown. That’s the type of demented shit I like to unleash upon unsuspecting AI, and Splinter Cell: Blacklist lets me indulge this evil streak.

Initially I figured I’d carve a path through every adversary, continue to torment and torture AI and leave no man alive, but here’s the thing. By not forcing stealth down your throat, Ubisoft Toronto has performed a masterful sleight of hand and actually makes you want to embrace it. A loud mess is barrels of fun, but usually brings with it reinforcements and enemy AI is surprisingly clever and adaptive, dogs in particular can be one hell of a nuisance. You will quickly get overrun and die, a lot. 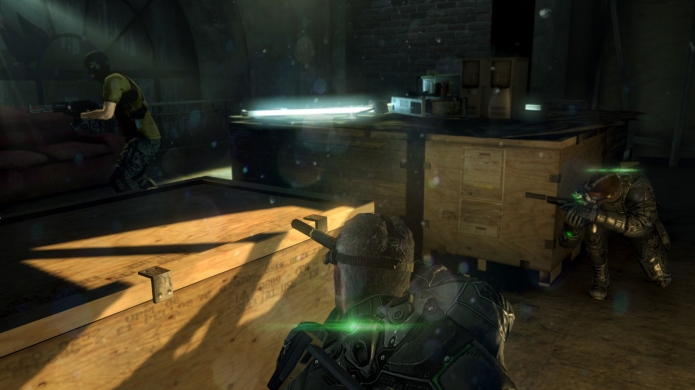 By strategising and taking down enemies all quiet like, using noisemakers to grab their attention, sticky cameras to scope out pathways, tear gas to incapacitate or flashbangs for shock and awe before a delightful knife in the back, I found a new level of satisfaction in deception. Stealth kills earn you ‘Mark and Execute’ tickets so you can target and eliminate up to three enemies at once, perfect to get you out of a jam and made me want to mix up my play. The longer I played the stealthier I became, and that’s where the true magic of Splinter Cell: Blacklist lies.

Once you’ve mine single-player for all the gold it has, co-op brings a different experience allowing for team breaches and boosts, tandem executions and the like. The thing was I never really felt that I needed a buddy. Don’t get me wrong, I was happy for the assist, but it wasn’t absolutely necessary other than unlocking a few alternate pathways. It’s a fun wee distraction, well, until you hit Spies vs. Mercs that is.

The popular stealth-based asymmetrical multiplayer Splinter Cell is known for makes one hell of a triumphant return. In this mode two teams of two or four players go head-to-head in the usual Deathmatchy, Capture the Flaggy or King of the Hilly type shenanigans, all suitable renamed, of course. Spies operate in a third-person perspective with all manner of glorious gadgetry and are more hand-to-hand specialists. Mercs have more health and firepower and an array of anti-spyware devices such as mines or cloak disruptors, and play like a regular first-person shooter. Each has their strengths and it becomes ridiculously addictive whether you’re mowing down a crew of spies who think they got the drop on you or slicing your way through a cadre of mercs, cloaked with them none-the-wiser. If you’re even slightly interested I urge you to take this for a spin, it is the most fun I’ve had in multiplayer in quite some time.

Now it’s not all a courtesy reach around for Ubisoft Toronto here. There were a few issues, though funnily enough, none of them impacted on gameplay. The cut scenes were a little rough around the edges with average looking character models and rampant screen tearing, neither of which were evident as I played through each mission. It was just localised to the CG. Not that the developers get a pass, but I’d much rather a shitty looking 20 second talkety talk scene not looking the sharpest opposed to a critical juncture on the ground. Ubisoft Toronto put all its eggs in the gameplay basket and I don’t have a problem with that at all. 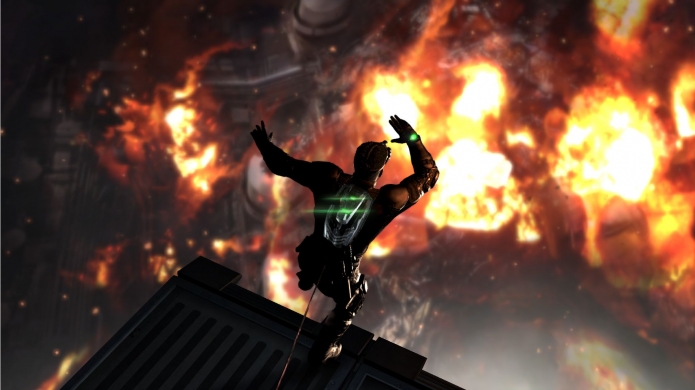 It’s a rarity when a title delivers engrossing, compelling, varied and highly replayable gameplay in both its single and multiplayer elements. Splinter Cell: Blacklist is such a manner of beast and other than a few graphical inconsistencies it remains one of the most solid all-around combat experiences I’ve snuck around behind and embedded my knife into.
Latest Comments
No comments currently exist. Be the first to comment!
Commenting has been locked for this item.
Follow Us
Latest Reviews
More...
News Feed
Advertisement
Latest Threads
Log In
Create Account | Lost your password?