The cyberpunk setting is one that due to its sheer age has changed and evolved alongside advancements in technology. The dawn of the internet age, social media, and other milestones of the past few decades now find themselves intertwined with the genre. But the underlying themes that can be found within the cyberpunk aesthetic, those dealing with identity, artificial intelligence, freedom, and corporate control have always been there.

The Red Strings Club from three-person indie studio Deconstructeam uses its cyberpunk setting to tell a very modern take on the story of a giant corporation on the verge of releasing new technological assists. The sort of future-tech that aims to shed away all the bad stuff that comes with being human.

Depression, sadness, anxiety. Which coming on the heels of Supercontinent Ltd.’s first product – genetic augmentations along the lines of increased confidence, the removal of all empathy, and other things best suited to a career-focused individual of the future. 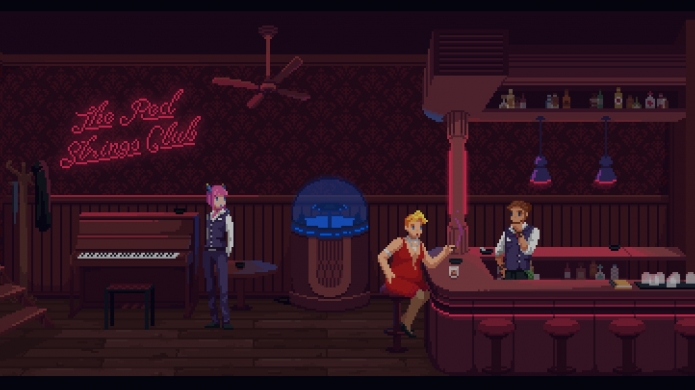 For the majority of its run-time The Red Strings Club is a mostly narrative-driven experience, where characters and conversation take centre stage. As the bartender of The Red Strings Club, and a seasoned information broker, it’s through encounters with familiar and new faces that the story and overall goal of Supercontinent Ltd is made known. From there an interesting and morally grey tale begins to take shape, thanks in part to one of the purest game aspects of this release - the act of mixing drinks for patrons.

With a knack for being able to set the mood and alter the state of mind of someone through alcohol, one can choose whether to mix a cocktail to cause elation or deep depression. Naturally, the outcome plays a role in the type of responses you receive. It’s an interesting and well executed mechanic that plays into the overall narrative, whilst adding the first layer of doubt to the protagonists we get to see and control. 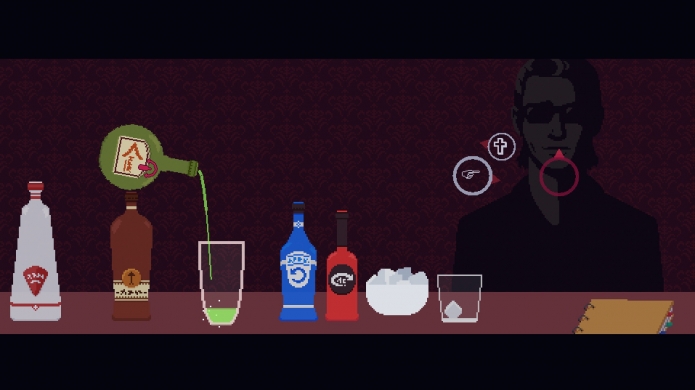 Later in the story whilst following a hacker with lofty goals to take down the seemingly evil Supercontinent Ltd, you get to impersonate different people to try and obtain deeply personal information out of key characters. Many of which may, or may not, be innocent. Like the best sci-fi The Red Strings Club introduces us to interesting and multi-layered characters – namely the three protagonists Donovan, Brandeis, and Akara-184. And keenly explores the idea of trying to maintain a moral high-ground when manipulation is a key part of trying to stop a corporation from doing just that. Albeit, on a much larger scale.

Presented in a style that evokes classic point-and-click adventures from the likes of LucasArts and Sierra, The Red Strings Club bafflingly doesn’t feature any character portraits or close-ups. The pixel art, as it is, doesn’t really paint an accurate picture of what the main players look-like up close. That’s not to say it’s devoid of detail, as from a silhouette perspective little touches like how a character walks or lights up a cigarette are great. But, the lack of facial detail intentionally or unintentionally adds a feeling of detachment to some of the interactions. 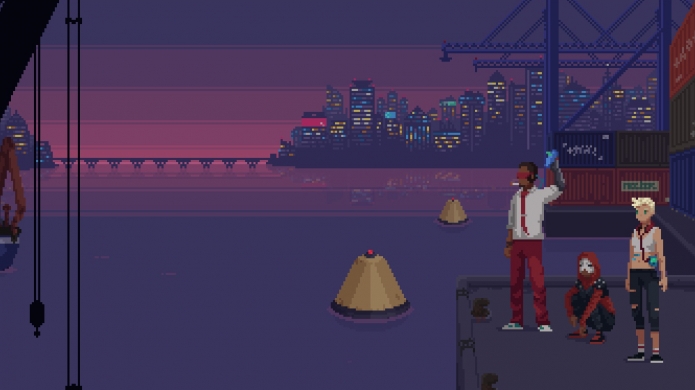 The lengthy conversations are for the most part engaging and well-written, but you get the sense that seeing a few of the faces up close would have added some extra weight to some of the bigger narrative choices made.

That being said, The Red Strings Club offers up a great cyberpunk narrative. One where the mechanics-driven activities like mixing drinks and building genetic augmentations only serve to add doubt and flesh out a memorable cast of characters. Coupled with a great soundtrack that doesn’t lean on any one style, wonderful locations, and a few surprising twists, it offers an impressive future-tale. One that isn’t afraid to delve into the idea of friendship, humanity, and what technological breakthroughs can bring us as a species.
Latest Comments
No comments currently exist. Be the first to comment!
Commenting has been locked for this item.
Follow Us
Latest Reviews
More...
News Feed
Advertisement
Latest Threads
Log In
Create Account | Lost your password?