Set aboard an abandoned orbiting space station, seventy years in the future, Tacoma is entirely concerned with telling a specific kind of sci-fi story. One that features a rather large cast of characters, each fleshed out and given their own concurrent narratives to explore. Where the relationships that they share with each other, the on-board AI, and their employer the Venturis corporation, is key. Also, there’s that whole mystery of how the space station Tacoma came to be devoid of any activity in the first place.

Taking on the role of corporate investigator, Amy Ferrier, you’re tasked with retrieving the on-board AI and all relevant data. From Fullbright, the indie studio behind the critically acclaimed Gone Home, Tacoma conveys a similar and immediate sense of mystery and wonder. As Amy boards the Tacoma during the intro sequence of the game she equips a pair of Augmented Reality (AR) circle sticker things to her head, where she is then able to replay recordings of past events. And watch each character relive bits and pieces of recent history. Think of it as the next step in watching surveillance footage on a computer screen. Where you, as Amy, can follow characters around rooms and listen in on different conversations. 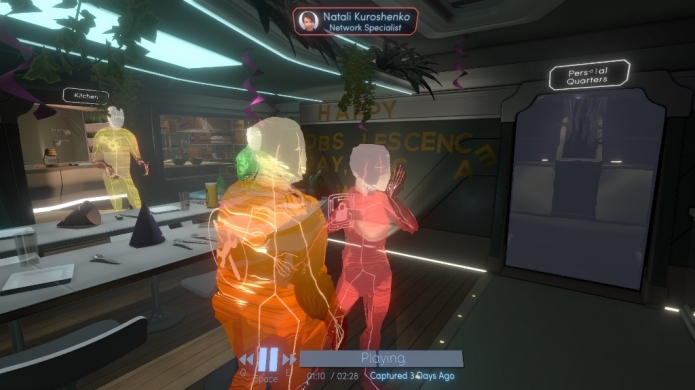 If you’ve played Gone Home then you probably won’t be surprised to learn that this AR mechanic, where you’re reliving digital “memories”, makes up much of the Tacoma experience. This is an interactive story in every sense of the term, where exploration is limited to the narrative. And engrossing yourself in all the little details. Like with its first game, Fullbright seem to be devoted to the power of incidental detail and the role the little things can have in telling a story and bringing a character to life. The type of food someone eats, the style of music that they listen to when they relax, how they arrange their toiletries in a bathroom, what makes up their living space in terms of decoration. Are they messy, clean, fans of 1920s jazz music?

As you listen in on conversations and get to understand who these people were that made up the crew of the space station Tacoma, it all comes together to form a narrative about trust, identity, betrayal, and the scheming of the sort of futuristic corporation that cares very little for the welfare of its employees. Which admittedly, could be said about several of the larger corporations that operate today too. 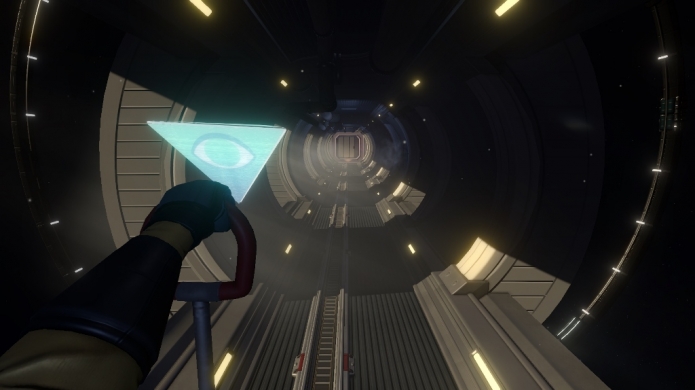 Where Tacoma fails to engage on the same level as Gone Home is that there isn’t really any sense of urgency or tension. Two elements that make up a large part of the AR recordings that you get to relive. For a mostly linear experience, set aboard a derelict space station that is running out of oxygen, it’s strange that Tacoma deliberately avoids including any crisis or memorable obstacle for Amy to encounter as she conducts her investigation. By that same token, the feeling of being able to breathe and take in all the finer details of each new “memory” without incident could also be viewed as refreshing.

Tacoma shines where it counts, and that is with the story it tells and the feeling that each character within it feels real. Including the on-board AI called Odin. As an interactive story, getting to pause, rewind, and check out the movements and activities of different people in a digital recreation of past events works flawlessly. And it’s the sort of mechanic that feels fresh, whilst also being something that could only really exist in this form. Lasting roughly two hours or so, Tacoma also never feels laboured or padded with extraneous content. But, as it also doesn't present a story focusing on one character as the lead there’s a feeling that something is missing. Which, robs the ending of some of its emotional weight.
Latest Comments
No comments currently exist. Be the first to comment!
Commenting has been locked for this item.
Follow Us
Latest Reviews
More...
News Feed
Advertisement
Latest Threads
Log In
Create Account | Lost your password?