There was one aspect of Super Mario 64 that you might have forgotten about. In order to the game and save Princess Peach from the clutches of Bowser, you only had to have collected just over half of the Stars. Odyssey has Power Moons. It was only after finding all the additional Stars and secrets, new endings, and even going back to race down the iconic slide for the 100th time, that Mario 64 came into its own. Super Mario Odyssey has in part been presented by Nintendo as a spiritual successor to Super Mario 64, the original 3D platformer. Or, one of the genre’s first high watermarks. And one of the many reasons why Odyssey succeeds, comes from the simple fact that completing the game is only the beginning.

And what a beginning it is. 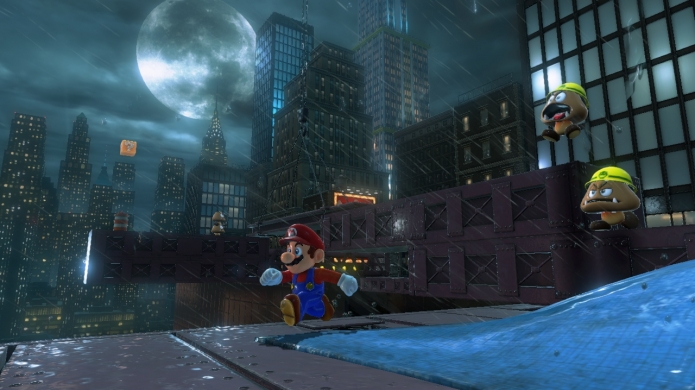 Sure, Mario is once again trying to save Peach from the clutches of Bowser - this time by stopping their wedding. But what separates Odyssey from Mario 64 is with how modern it feels. The breakneck pacing whisks you from Kingdom to Kingdom as you hunt Bowser, meet new engaging characters, and run, jump, and throw your cap around a steady stream of fun, exciting and always new challenges. Surprise, excitement, and joy can be found around almost every corner. A staggering feast for the platforming senses. And one that makes you wonder why it doesn’t really let you stop just to take it all in.

Even though you can spend the time to explore before moving on.

There’s a sense of urgency with Super Mario Odyssey that is hard to shake, a first for the series. And one that helps establish Odyssey as the genre’s most important releases this side of the Y2K bug. The urgency or momentum results in a remarkably varied experience that goes from a beachside volleyball game one minute to controlling a tank the next. Or in some of the more impressive sequences, traverse a wall to reach a higher point. A wall that transforms into an 8-bit Mario platformer. Genius. 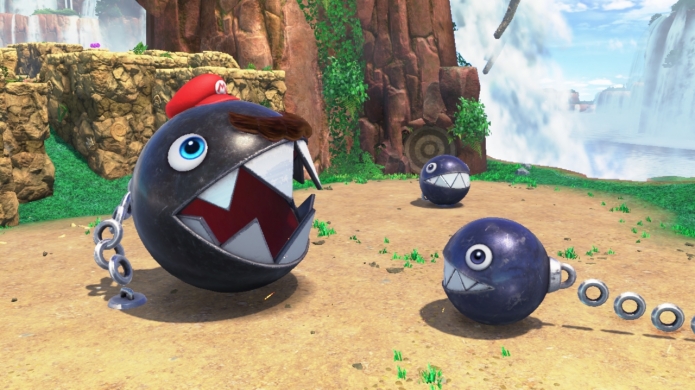 By now you probably have seen Super Mario Odyssey’s core mechanic, which is to use Mario’s companion Cappy to enter the bodies of certain enemies. It’s a strange concept and one that Nintendo is fully aware of just how strange it is. The first Cappy transition is prefaced with an almost drug-induced trip as Mario falls down a colourful well of frog imagery and bright lights. Because, well, the first creature that Mario becomes one with in Odyssey is a frog. Naturally, coming from Nintendo this choice makes perfect sense. In the overall design of this new adventure and in explaining the mechanic. As frog Mario, donning the same red cap and bushy moustache, you can jump higher. A lot higher.
And in one fell swoop Cappy is explained.

The frog then disappears in the same way that the Super Mario Galaxy series on the Wii was never content on repeating itself, with each new Kingdom introducing new creatures and puzzles and mechanics and scenarios. And just to reiterate just how fast paced, surprising, and joyous Super Mario Odyssey can be, one the next creatures to take control of is a Tyrannosaurus Rex. 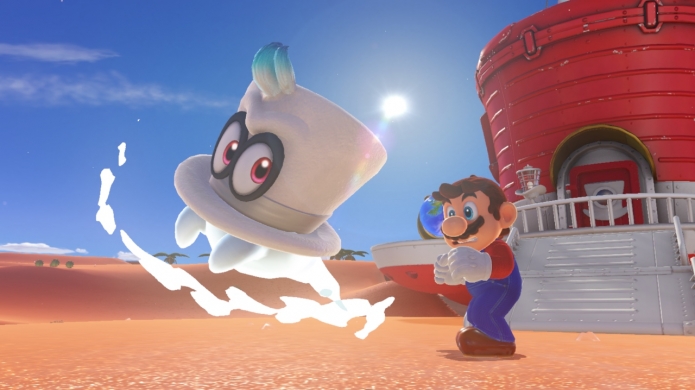 Outside of the solid genre-best controls for Mario, that look and feel remarkably similar to those from the 64-bit outing, there are only two moves in the game. Jump and throw out Cappy. Naturally there’s a lot of nuance to be found, plus a separate crouch button to perform backflips and rolls. And with close to 1,000 Power Moons to collect in total, it’s astonishing that Super Mario Odyssey never feels laboured, repetitive, or simplistic.

Let’s get back to that number for a second. Super Mario 64 had 120 Stars to collect, Odyssey has almost ten times that amount. Does that mean that when you add up all the digital real estate that the kingdoms are ten times larger in size? Not really. Even though it has been a long time since Mario 64, and the Nintendo Switch is a vastly more powerful console, in an hour you could quite easily find a few dozen Power Moons. Which also come in groups of three for certain key events and boss battles. How they differ from the Stars in Mario 64 is that Odyssey offers up Power Moons for just about everything that you might consider doing. Reach a distant platform? Power Moon. Take part in some jump rope? Power Moon. Shop for a new set of clothes for Mario? There’s a Power Moon for sale too.

It’s a fundamental shift that alongside the fast-paced nature of the adventure and the lack of an overworld, help elevate Super Mario Odyssey to more than just spiritual successor or the next entry in a series of games. 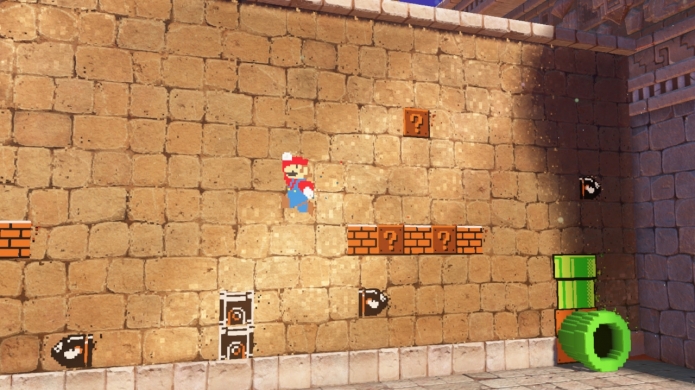 As for the Power Moons themselves they naturally serve a purpose and that is to, err, power the Odyssey – Mario’s airship that he and Cappy use to track down Bowser. And Cappy’s sister too, lest we forget his motivation. Certain amounts are needed to reach the next Kingdom, which come in flavours that you might call familiar or staple – Sand, Ice, Forest, New Donk City, Luncheon. Okay, so maybe not that last two. It’s simple and straightforward, and even though Odyssey doesn’t feature an overworld – one of the many features of Super Mario 64 that was subsequently copied by just about every 3D platformer since – you won’t miss it. In fact, going back to Odyssey’s pacing, the linear and branching nature of flying the Odyssey to reach the next Kingdom is a welcome one.

Of course, the sheer differentiation between the core themes and set pieces found across the fifteen or so Kingdoms, is routinely impressive. Even the real-world stuff which may have felt jarring from first glimpses at the game feel right at home. Setting aside the similar controls and the platforming genre, Super Mario Odyssey also doubles as a celebration of the core Mario experience – the same one that dates all the way back to the 8-bit NES. In Odyssey when Mario saves New Donk City from a menacing presence, Mayor Pauline tasks Mario with helping put on a celebration and concert performance. Now that might sound weird, and in a lot of ways it is, but the simple pleasure of gathering a band through increasingly fun platforming is a joy. And feels like a well-earned break before the hunt for Bowser continues.

The concert itself is the moment Super Mario Odyssey becomes something truly special. An interactive history of past glories filtered through the sort of prism that turns a regular beam of light into a rainbow. 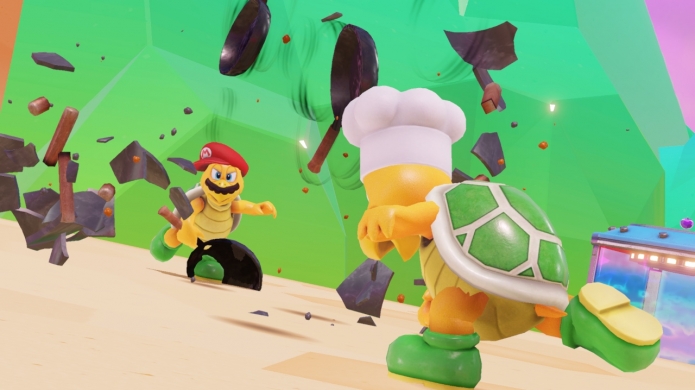 Super Mario Odyssey isn’t just the best platformer to come around in years, it’s also one of the most essential releases of the year. Period. A showcase for Nintendo’s development talent and Mario as an iconic character that can still deliver surprising and transformative experiences even after all these years. It’s a game that not for a second lags or starts to feel like more of the same. It rewards players in ways that we rarely get to see, and even when it’s over it begins anew and invites you to keep exploring, keep discovering, and keep reaching for the moon.
Latest Comments
Link