In 2007 Sony dropped into gamers’ laps one of the most compelling, addictive and brilliantly balanced third person multiplayer experiences the likes of which I’d never seen before by the name of Warhawk. Judging by the number of people who actually played it, neither did many of you either.

This online only juggernaut took a design direction influenced by a 1950s style retro-futuristic slant, gave you plethora of hand held weapons as a infantry trooper, a slew of vehicles ranging from jeeps and tanks to armoured mobile spawn point APCs and drop ships, the game changing aircraft known as Hawks each with a fully loaded arsenal of death dealers to rule the skies and even threw in freakin’ jetpacks for shits ‘n giggles.

Boasting the tightest and most responsive arcade styled flight controls I’d seen since the Xbox classic Crimson Skies, a steep learning curve and incredible supportive community Warhawk became more than an addiction for those that delved into it. After waving the banner for it loud and proud and clocking in well over 350 hours of multiplayer madness I’ve often considered it the greatest game no one ever played. 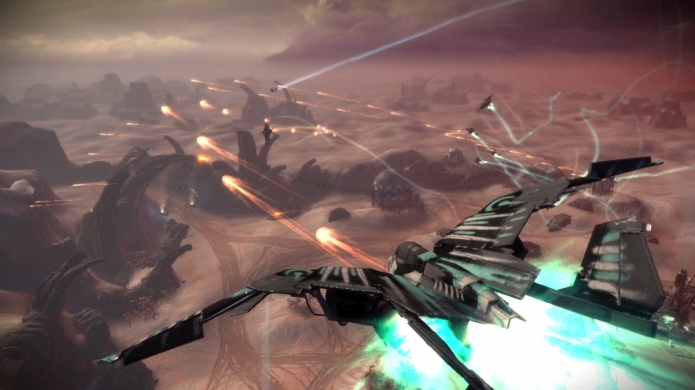 Now before you start muttering to yourself “thanks for the history lesson ko-zee-ii old mate, any chance you could get to the review?” I just wanted to set the stage and give you a little background before getting into Warhawk’s spiritual successor, Starhawk.

While its predecessor merely offered a multiplayer only extravaganza, this new iteration supplies a decent story driven single player campaign to get your feet wet, a co-op horde mode to let you adjust to the temperature before your throw yourself into the deep end in the life destroying multiplayer component. Starhawk gives you a little bit of everything and with a little more polish to the plot could have been one of the definitive all around third person shooters around.

At its core Starhawk is a tale of two brothers Emmett and Logan Graves. Taking its tonal, musical and visual cues from Joss Whedon’s intergalactic futuristic Western Firefly/Serenity, the brother work as Rift miners as they gallivant through a series of outer rim mining colonies prospecting and staking their claim to the highly sought after and valuable Rift Energy. Their profession is a dangerous one with those overexposed to the unstable Rift Energy paying a heavy price, a mutation that turns survivors into Rift Energy mutants known as the Outcasts.

While defending their claim from an Outcast onslaught their rig is destroyed showering the pair with Rift Energy. Emmett barely escapes intact, surviving as some half and half hybrid. He believes his brother Logan dead, but he couldn’t be more wrong. Logan has been transformed into an Outcast with a strange resonance with the Rift Energy (which the Outcast call The Source) and has begun organising this former band of marauders into a strategic and formidable opponent.

What results is a classic Cain versus Abel, brother versus brother brouhaha with fledgling mining settlements paying the price before the epic final confrontation between the siblings. The story is related in comic book styled sequences very ala inFamous breaking down key plot points. It’s solid enough but incredibly glossed over leaving very little emotional attachment to any of the main players. You never really make any connection or identify with the characters. 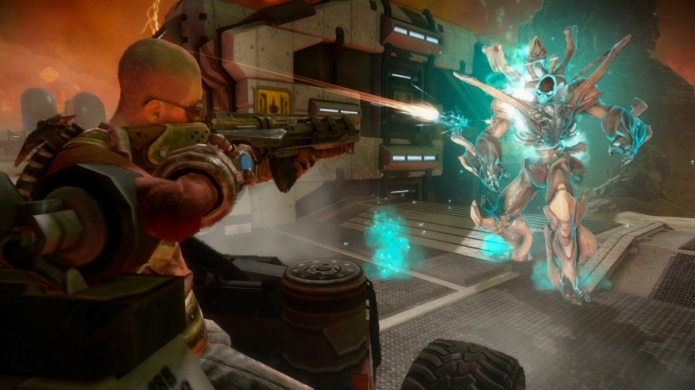 The potential could have been off the charts particularly when Logan and Emmett showdown and Logan hints at a possible sentience to Rift Energy. This is by no means a spoiler as the story is laid bare very early on in the piece with very few unpredictable moments, however a little more tinkering into each character’s desires could have made the end result significantly more effective and satisfying. Imagine a flipside of believable motivation for either brother. Emmett thinks he is defending these colonies from a snarling maniacal threat, while Logan is acting on behalf of a possible sentient life form simply trying to exist.

The potential for dual endings and layered characters was simply brushed aside and while the single player is still serviceable plot-wise it is unremarkable and fails to leave any lasting impression. It acts simply as a training ground to prepare you for the extremely robust multiplayer and co-operative horde modes, which I’ll touch on a little later.

Starhawk’s gameplay is quite unlike anything you’ve ever seen. Fundamentally it’s a third person shooter with vehicles and an RTS/tower defense element to it. You start with a bare bones pistol and machine gun but as you come to terms with the “Build and Battle” component it deepens considerably. As you collect Rift Energy from downed Outcasts or from destroying barrels containing the precious resource you’ll be able to call down and place structures all over the battlefield making for some wild and constantly fluctuating gameplay.

You can call down walls to block off routes and force adversaries into choke points or dump down automated turrets and the heavy-duty beam lasers to knock enemy Hawks out of the sky. Spawn beacons are used to garner reinforcements or you could even pop up an energy shield to protect other Rift-miners, and these are the most pedestrian of abilities. Weaponry and vehicular combat is directly tied into the Build and Battle gameplay. 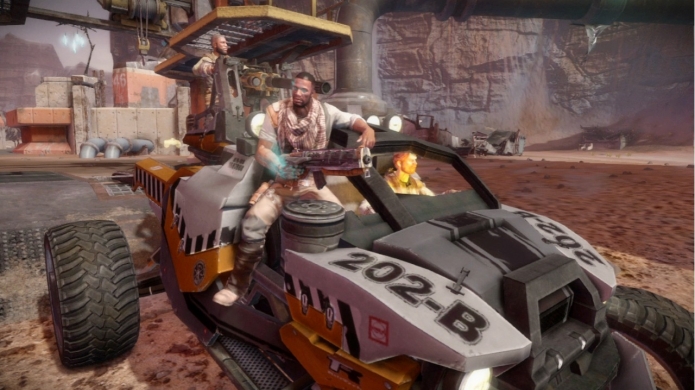 Fancy some pop-shots from long range? Then a sniper tower’s the answer complete with a high-powered laser rifle. Perhaps a supply bunker is more your speed, as you load up on rockets, grenades, ammo and the brutal shotgun ever so devastating up close. Maybe you want to pimp out some rides. Manifest a garage with a turreted moon buggy, a vulture jetpack dispenser (freakin’ jetpacks FTW!), a heavily armoured tank or the ever-popular Hawks and take to the skies. Hell, you can even drop down a mechanical arm to repair any vehicle near it. The key to victory is a little planning. Not every item is at your disposal on every map/section, so you’ll have to strategise and use what you have to survive.

Friendly AI works well for the most part happily jumping into vehicles or mounting Hawks when they’re available, but you’ll need to be careful where you position structures or they can get confused. During a climactic space battle towards the end of the single player I set up an outpost on a secluded asteroid with a spawn beacon and Hawk launching pad figuring that this would be the perfect little reinforcement recipe only to watch in disbelief as each newly spawned soldier ran off the edge of the asteroid into oblivion in their eagerness to join the battle. I could be wrong, but I’m almost positive I heard a few of them shout, “I regret nothing” as they launched themselves into the abyss. Hmmm… maybe it’s just me.

The Hawks have been modified so that they transform into a mech warrior if you land on the ground easily mopping up dozens of Outcasts at a time, but the cockpit is exposed in this mode so keep your eyes peeled for snipers. The flight controls are a little less responsive than they were in Warhawk but more user-friendly. In Warhawk a few crack pilots could change the nature of a battle, but Starhawk is more balanced and the gameplay doesn’t suffer in the slightest from this modification/nerf-ification.

Once you’ve acclimatised yourself to the ins and outs, which the single player does rather well slowly bringing you up to speed, it’s time to hit co-op and multiplayer online and this is where Starhawk shines ever so brightly. There are a handful of horde styled co-op missions to help you get accustomed to working within a unit but multiplayer is where it’s at with incredible potential for debilitating teamwork at your fingertips. 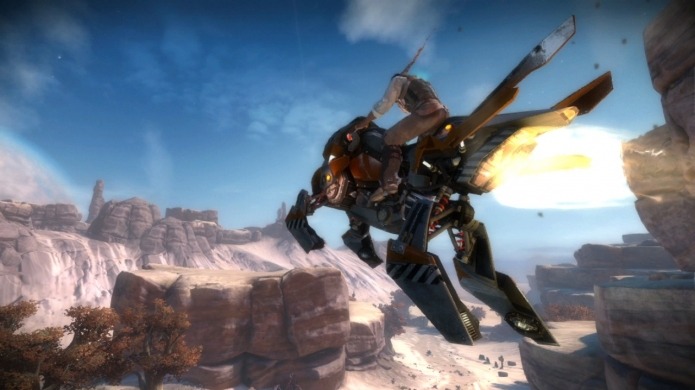 You’ve got all the usual bells and whistles, Deathmatch, Team Deathmatch, Zones, Capture the Flag, but the battlefield is always changing keeping the action hard, fast and fresh. Three or four players working in tandem can have an incredible effect and almost instantly change the momentum of a game. During a game of Capture the Flag myself and two other miners jumped in a buggy and headed towards the Outcast base. We each had a full compliment of Rift Energy and in the space of twenty seconds we managed to set up an instant command centre consisting of an energy barrier, spawn beacon, Hawk launch pad, supply bunker and beam laser turret within a stone’s throw of the flag and changed the course of the round in an instant, and it doesn’t get much better than that.

That’s the joy of Starhawk. It encourages and rewards teamwork. Heck, it depends on it. If you’re a lone wolf and you’re just concerned with your kill count stick to the swarm of military styled first-person shooters out there, but if you like challenging gameplay in a constantly evolving battlefield, Starhawk is just what the doctor ordered. Its nuances are deep, the layered gameplay is incredibly satisfying and there really is nothing quite like it out there. Now if you’ll excuse me, I’ve got another 350 or so hours to knock out…
Latest Comments
Link