Both Doom (1993) and all-caps DOOM (2016) set the tone for the broader FPS genre for quite some time after their respective releases. In the case of the latter it sparked a return to weapon-heavy, fast-paced combat with retro/modern twists. Like over-the-top glory kills and keeping strategy tied to game-mechanics ala DOOM Eternal (2020). That is, having things like armour drop from enemies set ablaze or having ammo spill out whenever you chainsaw a trash demon in two.

Gameplay stuff done to improve the feel of combat without having all that much to do with lore. Or, you know, the reasons you’re shooting at stuff.

Although Flying Wild Hog and Devolver Digital first rebooted the ‘90s FPS relic Shadow Warrior in 2013, this new entry definitely feels inspired in part by the success -- and excess -- of DOOM Eternal. Which makes Shadow Warrior 3 both different and better than the first two titles in the reboot series. More focused, too.

This is said not to disparage past entries or this new game, or to chalk it up as a ‘DOOM Clone’ in the same way the original might have been back in the day. Rather it’s to let it sit alongside id Software’s efforts as an entertaining, vibrant, arcade-styled riff on one of the most explosive action games of the past decade.

An entertaining, vibrant, arcade-style riff on one of the most explosive action games of the past decade.


The best way to describe Shadow Warrior 3, for those well-versed in the ways of the FPS, is to liken it to a loud, colourful and inviting arcade cabinet you simply cannot walk past. An arcade game that takes a beloved film or game you know from watching or playing at home and turns that into an instantly gratifying over-the-top romp that is forever entertaining and always leaves you smiling.

A variation on this idea is to liken Shadow Warrior 3 to hopping on a rollercoaster. One of the good ones too. The sort of coaster you’d find in an American theme park where they serve oddities like corndogs, candied corn and churros the size of full grown men. 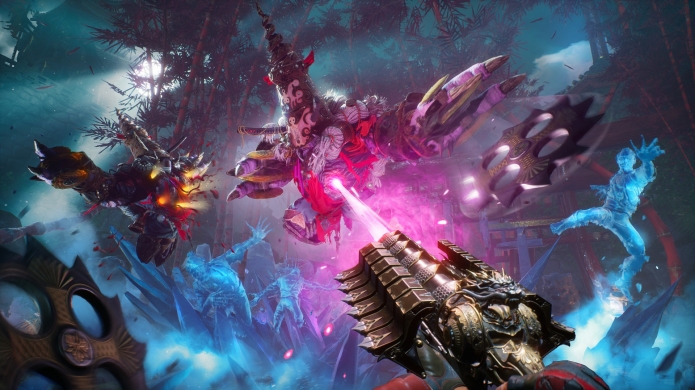 There’s a very real rollercoaster feel to the level design too, where it’s mostly wall-running or using the grapple hook to move between combat arenas at speed – pretty much exclusively along a narrow path or track. Combat arenas, too, have the feel of interactive playgrounds you can circle endlessly around as you take out demons, collect ammo and health pick-ups, and trigger traps. Granted it took me a full level or so to get into its flow, but once I did it became hard to look at Shadow Warrior 3 as anything but insane amounts of fun.

This theme park approach also works for the story, as light as it is, and protagonist Lo Wang’s steady barrage of amusing one-liners. Swinging around a combat space swapping out weapons, grabbing ammo, changing things up because a new type of enemy has showed up. Doing all of that whilst hearing Lo Wang say something like, “Have you looked in a mirror lately? Well, you shouldn’t” is infectious. And humorous in a way that’s joyous. It adds to the experience and keeps things fun, especially when the action gets tense. 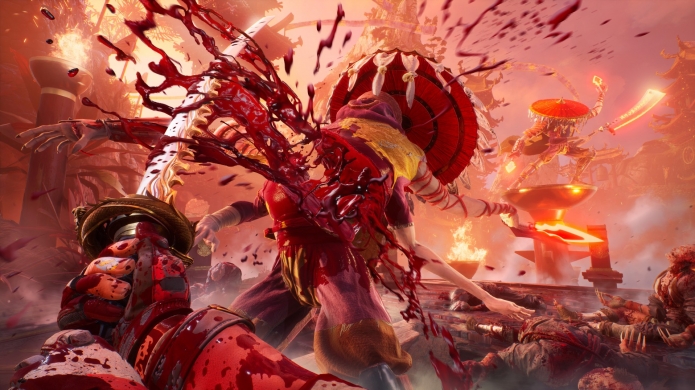 This infectious and inviting tone plays into all aspects of Shadow Warrior 3, as well. From the colourful, imaginative and wonderfully animated enemies to the equally vibrant locations. It also plays into the gorier parts of the game too, namely the introduction of Gore Weapons tied to a super/ultimate charge.


Building up a charge to trigger a DOOM–style glory kill except Lo Wang rips a giant demon in two to pull out a limited-time weapon of sorts. Ripping off a large melee brute’s leg to use it as a giant whack-a-mole mallet, tearing apart a sentient (and psychotic) accordion-thing to find a fireworks gun that creates a light-and-gore show. The list goes on.

Gore Weapons come into play at a regular clip too, and with each demon having its own strengths and weaknesses this leads to some brilliantly over-the-top, intense and fast-paced bouts of ridiculous carnage. The best kind. When paired with the wonderful and colourful art direction, the great animation, and rock-solid performance, Shadow Warrior 3 presents some of the most fun I’ve had in an FPS in quite some time.

Though it has to be said that said fun, like hopping onto a great theme park ride, was limited. The campaign and story can be beaten in under six or so hours, and the overall difficulty feels a tad easy even on the hard setting. Which makes not having the option to carry over upgraded abilities to a new game feel like a pretty glaring omission, especially when it doesn’t seem possible to unlock everything in a single run. Yeah, no New Game Plus or a mode that lets you play remixed levels or take part in some sort of time trial or straight up arena challenge.

Basically, Shadow Warrior 3 left me wanting more on the account of the relatively short campaign being the entirety of the experience. But there’s something to be said about that. A repetitive shooter that structurally doesn’t change over the course of several hours yet doesn’t grow old or feel tired. A gem of a first-person shooter, an interactive rollercoaster, and one hell of a good time. So much so it’ll have you lining up to go again.
Latest Comments
No comments currently exist. Be the first to comment!
Commenting has been locked for this item.
Follow Us
Latest Reviews
More...
News Feed
Advertisement
Latest Threads
Log In
Create Account | Lost your password?