The next evolution of the sandbox videogame concept could only be on another planet. It's one thing to painstakingly model your game's world off a real-life location, and quite another to flex some creative muscle and build your own functional setting. Volition have done just that with Red Faction: Guerrilla; a game that sets players up in a future where Mars has been colonised by Earth, but like one of many Total Recall homages riddled throughout, said colonisation has been turned into something of a dictatorship, with security forces essentially holding a full planetary lockdown on denizens, creating a police state where even sneezing puts you in some form of suspicion of revolt.

For you, however, it's a little more than a sneeze, and upon the untimely death of your younger brother for being a member of the Red Faction, a 'terrorist' group of freedom fighters attempting to derail the Earth Defense Force (EDF), you're thrust into the role of official muckraker.

There's a story within the red Mars rocky walls of Red Faction, but beyond simple reasoning (for your newfound destructive nature), it's not all that important. Your brother is dead, people are pissed off and you pretty much have no job - what you do have though, is one kickarse sledgehammer, and an entire planet full of construction just waiting to be battered about. 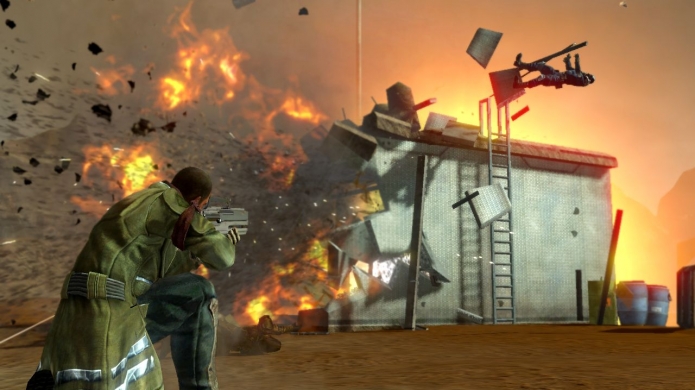 Like so many games of this nature, Red Faction offers up something unique in its destructible environments thanks to Geo-Mod 2.0 where pretty much anything around you can be torn asunder. Obviously with a narrative based around acts of terrorism against a fascist regime, having such an engine component makes perfect sense, and it's ideally from this a large portion of the game's missions and progression stem. The game's structure is fairly loose in that you're never really told what to do or how to do, and in this idea Volition have really nailed that other element to sandbox gaming: freedom.

You'll be given objectives on-the-fly, which if failed can simply be tried again, or will trigger later on. You have a map with various markers to choose from; each representing a different course of revolutionary action available to you from simple building deconstruction to hostage rescue. The range of missions and objectives throughout the game is wonderfully diverse serving up a feast of great moments of gameplay that are never too grating on the nerves, or poignantly cumbersome.

That isn't to say Red Faction is a walk in the park, because it most certainly isn't, and there's a serious layer of depth here that sees players needing to collect 'Salvage' (the game's currency) in order to upgrade weapons and armour which, if ignored, will see you dying over and over again. Salvage can be mustered through every day construction whereby you simply take your explosives or trusty sledge to anything that can be destroyed, and for the most part, whatever you knock down will leave you a few bits of salvage to grab. You also earn salvage through completing missions as well as mining the ore deposits scattered across the planet (there are 300, apparently).

All of this combines to craft an enjoyable game that rarely reigns you in, but unfortunately, it's this lacklustre attitude towards structured progression that initially lets the game down.

The first two areas of colonised Mars for you to play in, Parkour and Dust, both ease you into a dense portion of tedium, steadily dosed through grinding short missions in hope to not only gather enough salvage to beef your character up to a point to actually move on, but to see if there's going to be anything beyond two distinct shades of red to take in as something of a Martian tourist. Thankfully, there is and maintaining a steady course for this first third of the game will reward you with some seriously awesome weapons (such as the Nano Rifle), missions and scenery.

Visually, Red Faction looks great, though in saying that there's not a great deal to fill on a detail level, but I can honestly say it really does feel like you're scooting around on Mars. Everything that populates the land is also quite stunning to look at. Vehicles are decidedly futuristic, though they don't handle as well as vehicles from GTA, they're still very functional with a wide variety to choose from. Buildings are also high in detail, which is mighty impressive given most of them are destructible. The physics that applies not only to the individual pieces as they're torn from the structures, but the actual density of material and it constructive place within said building's architecture really is awesome.

Load-bearing walls are in place, and you'll need to be savvy to pull them down with any sort of speed (a factor that pops up often with timed destruction missions and situations where you're completely overwhelmed and surrounded by the enemy). What's ultimately great about all of this is Red Faction's key gameplay component of destruction isn't a hack and slash affair - there's real skill involved (especially with some of the later weapons), and you'll find yourself thinking right outside-the-box in a lot of situations (remember, utes can be used to cart explodable barrels if you should run out of any other explosives).

Red Faction: Guerrilla is a great departure from the series' FPS roots, and jumping from linear game progression to true freedom has helped in both a narrative sense (the world of Red Faction is far more fleshed out here) and in allowing the player to engage this endearing game-world.

Things can become a bit repetitive early on in the game, but pushing through until you open up the Badlands and beyond is a real treat and well worth the effort. There are annoying factors to deal with such as simple AI, overwhelming odds (and a serious lack of good armour) and the daily grind from Safehouses to mission points (the play areas are really pretty big), but the fun you can have with the Geo-Mod 2.0 tools and Havok physics make up for this in a big way. A deeper storyline wouldn't have gone astray, but as it is I get to live out my Total Recall fantasies of traversing the surface of Mars without my eyes popping out of my head, so Red Faction is a winner in my book - well worth the trip to Mars.