Before you is a review detailing arguably the greatest, most remarkable example of design and development ever produced in gaming. Red Dead Redemption 2 is the most engaging game this veteran games writer of 21 years has ever played, or had the privilege to review. It’s overwhelming in its majesty. Absolute in its promises. Paced to perfection. It features the most detailed open-world ever created. An ecology David Attenborough would spend years making a BBC series about, and then win every BAFTA for. It’s a microcosm of romanticised period media; a place you can hang your dusty hat and call home for an ungodly number of hours. It’s as close as we’ll ever get to experiencing the Wild West, unless a real-life Ford goes a step further and brings Westworld to life.

Honestly, I have never played a game of this calibre before, and it almost feels doubtful I ever will again. 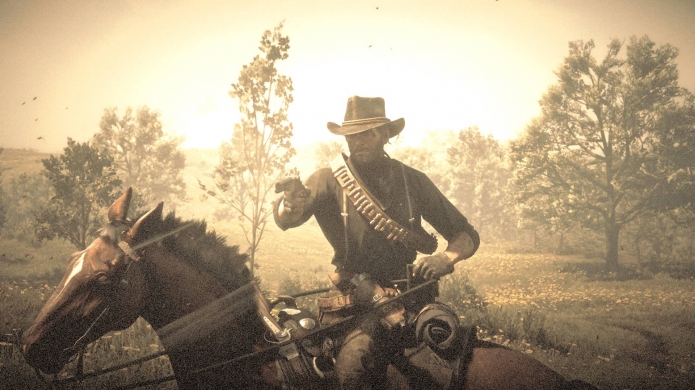 What separates Red Dead Redemption 2 from so many other open-world games -- GTA included -- is in something you’ll read and hear a lot about where this game is concerned: weight and context.

"When you get off the early beaten track and just ride out into Red Dead Redemption 2’s ungated game-world, you’ll understand why all of the above is such a big deal..."


What we gain from much of this is dynamic and contextual outcomes based on systems playing together in unique player-driven ways. It’s not always dynamic, but it doesn’t always need to be. Even the game’s scripted moments create interesting outcomes if something gets in the way, but it all flows with a sense of purpose and place. Moreover, in adding to context this, as an open-world game, breaks myriad rules for utilising context-sensitive interactions that aren’t planned, canned or even scripted. It’s a marvel to behold, and the main characters, NPCs and the world around them dynamically deals with whatever the player throws at it. And while all of that is a bit of a mouthful to take in, when you get off the early beaten track and just ride out into Red Dead Redemption 2’s ungated game-world, you’ll understand why all of the above is such a big deal. 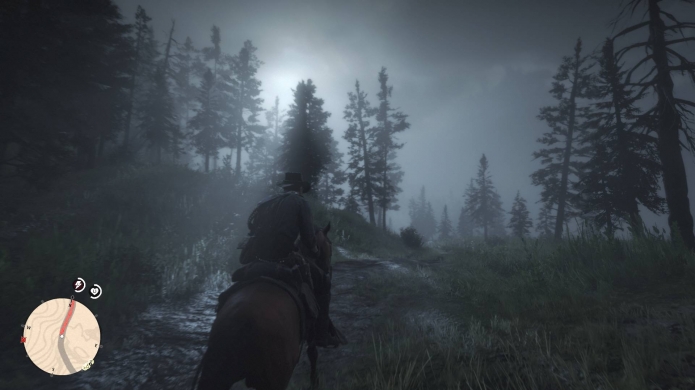 When looting, for example, you don’t spam Y or Triangle to fill bottomless pockets accompanied by a Pavlovian ‘ding’, you open a cupboard; a drawer, you break into a lockbox, you slide a case out from underneath its hidey hole. The goodies inside -- you physically pick them up. One by one. They have the slightest sheen on them to show that you can own them if you have room, but it’s never distracting, nor ever completely obvious. Even the money you find or earn is handed over in believable folds or piles. The world itself is equally full of weight and purpose. We exist here, and we exist to interact realistically with the things around us.

I mean, horses shit in real-time in the street and it builds up and attracts flies.

This is the level of detail we’re talking about here.

The actual hero of this piece, however, is the world itself. We applauded The Witcher 3, Horizon Zero Dawn, Assassin’s Creeds Origins and Odyssey, Marvel’s Spider-Man -- and many others -- for richly detailed spaces. And rightly so. But honestly, nothing comes close to what Rockstar has managed from a world-building perspective here. Whether it’s day or night; sun or shower; wind or thunder -- Red Dead Redemption 2’s game-world is simply breathtaking at every direct and peripheral point. You’ll find yourself shaking your head in disbelief, gasping for air or just stopping whatever it is you’re doing to take in the view. The draw distance is utterly ridiculous, though it should be pointed out here we reviewed the game on Xbox One X on our new Samsung 2018 65” QLED Q9F, which carried the product to its 4K HDR nth degree. And then some. 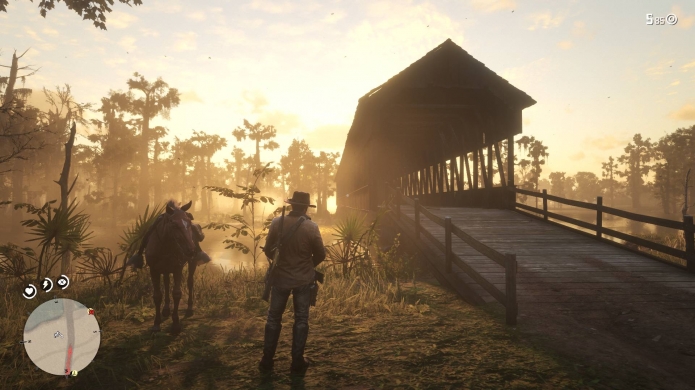 Watching either a sunrise or sunset over Flat Iron Lake -- never the same hue twice -- or a flash storm off in the distance with lightning strikes, delayed rolling thunder and unfurling clouds of torrential rain engulfing the Heavens above, is something you’ve simply never seen in games -- I guarantee it. And all of this shapes the mood of everything you’re doing at any given moment, and it’s accompanied by arguably the best soundtrack to grace a videogame ever. This is no longer Ennio Morricone-esque, this is now pure Red Dead Redemption -- a symphony of banjos, violins, harmonicas, guitars, drums and more not trying to emulate the Spaghetti Western. A soundtrack that dynamically works to fill the player with mood and purpose, to relay a sense of romanticised proprietary.

"No two missions are ever really the same, and while there’s a sense of familiarity around some where Rockstar mission design is concerned, they’ve matured their approach here..."


Of course there is a game here. It’s not all moving postcards from yesteryear with perfect audio accompaniment. And it’s in the game’s gameplay so much of the above coalesces as a whole. No two missions are ever really the same, and while there’s a sense of familiarity around some where Rockstar mission design is concerned, they’ve matured their approach here, save but a few hardfail situations that stem from annoying things like being too far away or accidentally punching someone or the like. But these are so few and far between what is a mammoth game, they barely even blip the radar.

Gunplay is fantastic, and there’s little-to-no RPG here. Some survival, sure. But you have three basic stats in Health, Stamina and Dead Eye. Your horse has Health and Stamina. And that’s largely it. You build these up by just existing in the world and playing the game properly. This is an outlaw simulator, and as such you’ll be breaking the law often, but you also have a family around you; a campsite of like-minded off-the-griders who look to you for help and guidance. You’ll need to earn money to put back into the campsite, and you’ll need to engage with your ragtag friends in order to open up a number of different types of missions and quests. You can upgrade the camp in numerous ways, and you need to perform chores, but in doing so -- regardless of how mundane they might seem -- you’ll work towards making Arthur a more complete person within the game. 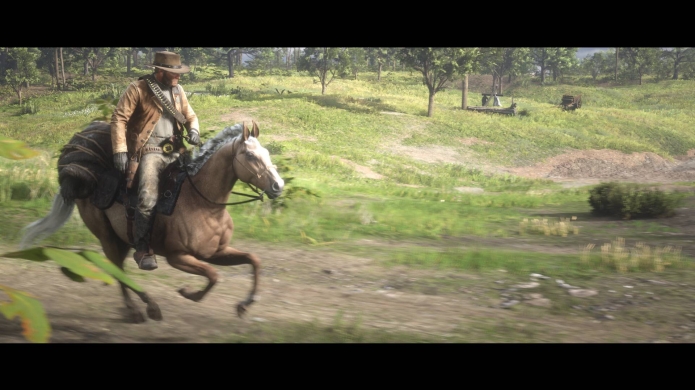 You’ll do some missions solo, some missions with random NPCs, some missions with regular NPCs and some missions with your gang members, but again each mission is dynamic in the context of the game-world itself. Some missions allow you to make a choice, and sometimes those choices will come back to bite you in the ass, or come back and reward you even further. You can also choose to play the game as the type of outlaw you want to be. A reputation system helps define your place in the game-world and how folks will react to you, and I’m not gonna lie, I went pretty goodie-two-shoes, but that’s because even the baseline required outlawing is pretty full-on.

Bucking some preconception, Red Dead Redemption 2 is an adult game, but it’s not even close to GTA V Trevor levels of maturity. Rockstar has foregone expectation in favour of a balanced, emulative take on the period in which the game is set. And it’s also a bit less silly than the first game. Strangers are the odd ones here, naturally, but the main story told in Red Dead Redemption 2 is a heavy and articulate one. It has its funny, kooky moments, but there’s no Seth Briars: Grave Digger extraordinaire, and the game is better for it.

What you get here is a game where… well, here’s an example of what you might experience yourself: During a play session I stayed up for eight hours straight, and in that time I managed one single mission. Just one. The mission itself couldn’t have lasted more than 10-minutes, either. 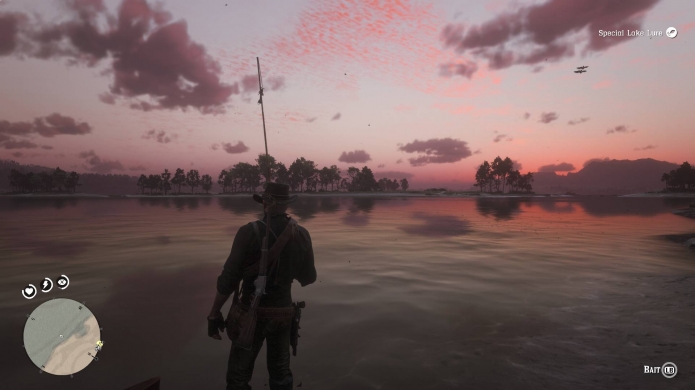 The rest of my time was spent on exploration and hunting; on being emergently jumped by a gang of hillbillies known as the Murfree Brood (there are five gangs to discover). On finding a logging camp where in-game weeks later the camp would be bare of trees and the lumber shipped -- in real-time -- to numerous towns for construction of actual buildings and homesteads. On where I would be tasked with finding dinosaur bones. Or asked to collect (read: hunt) “perfect” examples of animals for a “Wildlife Art Exhibition” (much harder than it sounds). On where a murderous serial killer left bloodied, dismembered calling cards. On collecting Cigarette collectable cards to send to a crazy collector. On gaining access to a Legendary fishing map for Legendary fish across the game-world. On emergently stopping a fight in the street, only to be roped into a fight of my own.

"And it wasn’t about money, or advancing the story or learning the fate of the gang and bridging the gaps between this and 2010’s initial release. It was the world..."


I couldn’t stop, either. I just wanted to keep going. And it wasn’t about money, or advancing the story or learning the fate of the gang and bridging the gaps between this and 2010’s initial release. It was the world. This place Rockstar has crafted; the dewy plains, the flowery meadows, the snowy mountains, the swampy Bayou; the density of Saint Denis -- all of it. I just wanted to exist as one with it and feel alive within it.

And that’s what I did, and continue to do. Horseshit-riddled streets and all.

Rockstar, my dusty old hat is off to you. You’ve made this old videogame cowboy a very happy camper.