One of my most controversial opinions of this gaming generation – certainly the one that has led to the most accusations that I simply do not possess a soul – is my claim that Rayman Origins wasn’t all that great. It looked wonderful, it had a fantastic soundtrack, but for me it lacked a sense of flow, its level designs disappointing constantly, never allowing me to get into a good rhythm or gel with the physics and controls that drove everything. I tried hard to love Rayman Origins, but couldn’t.

I say this to foreground the statements I’m about to make about Legends, lest they seem hyperbolic. I have played and loved a great many 2D platformers in my time: the first piece of games writing I was ever paid for was an article about Bubsy for the SNES, a game I still love dearly to this day. It’s a genre I adore, but one that I can be quite picky about when nostalgia isn’t involved. There are games that I appreciate without loving, and although the last few years have been something of a new golden age for the genre thanks to the indie uprising, the ones that have grabbed me have been puzzlers at heart. Limbo is one of the best games of this generation, but despite the mechanics behind it one might struggle to call it a truly excellent platformer. Super Meat Boy, wonderful though it is, did my head in over hour-long sessions. Donkey Kong Country Returns is a masterpiece, but it has now been usurped.

Rayman Legends is probably the best non-Nintendo 2D platformer I have ever played. 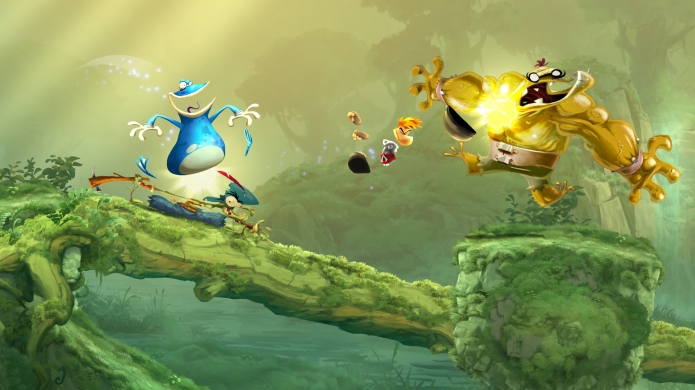 Every section of every level in Legends is designed with a perfect line in mind, meaning that a run in which you find every secret, collect every item and get a gold trophy at the end for your good work feels not only satisfying, but somehow correct. The game leads you not by holding your hand, but by featuring level designs so utterly exquisite that you can’t help but see the patterns that form, the paths you can take, the secrets lurking just off screen, even as you hold down the trigger to sprint through each level. As you progress through each world a dizzying amount of ideas are presented and tested. Rayman Legends is to 2D platformers what Super Mario Galaxy was to 3D.

It’s a game that reinvents itself constantly, throwing out wonderful ideas that could sustain entire games to try out something new, never giving you a chance to get bored. There are very few levels that don’t inspire a big smile, and the few that aren’t amazing are, at least, home to numerous genuinely interesting design choices. It helps that the artwork is almost absurdly beautiful too, bringing each level to life with more colour per level than most big games manage in their entire campaigns.

Legends manages this despite being fairly pared down. Rayman and the numerous other unlockable playable characters can run, jump, glide and punch, but the few power-ups they pick up along the way are rarely real game-changers. The only thing close to an exception is the addition of Murfy, a little dude who accompanies you on some levels and can alter objects with a tap of the B button (unless you’re playing on the Wii U, in which case you assume direct control, which is reportedly a total bummer for the lone player because it means that the A.I. snatches control of Rayman away from you). There’s a real purity to the game, then, a focus on a handful of mechanics that are polished to perfection, allowing the player to build up a mastery that serves them well once the difficulty starts to ramp up.

And ramp up it does. While there’s a general swiftness to most of the game’s levels, it’s in the frequently brutal speedrun challenges on offer that Legends shines brightest. Every level will, as you progress, become ‘invaded’, repurposed and remixed into a challenge level. Your goal is to finish each one in 60 seconds, but really anything below 40 seconds – the time you need to beat for the maximum reward in each section – feels like a failure. The platformer genre has always shared a lot of the same DNA with the racing genre, but the points of comparison are rarely clearer than they are here: finding new ways to shave half a second here becomes increasingly important as you get ever closer to progressing far enough to unlock the final set of levels. 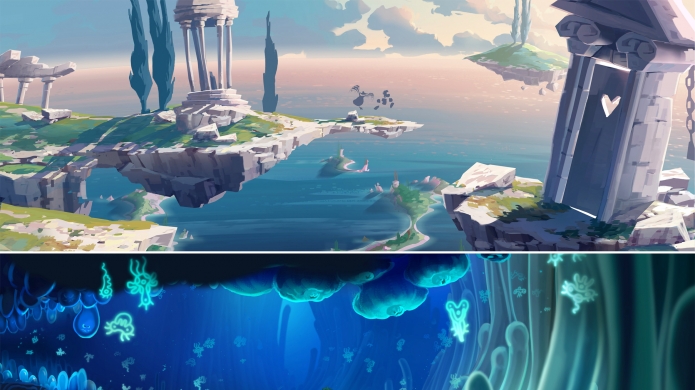 The further in you get the more often frustration can rear its head, and while it’s never the game’s fault when you die it can, at times, be hard to wrap your head around your own failings to move with the split-second precision the game demands. It actually takes quite a while to reach this point – most of the main levels are challenging without ever getting really difficult until right near the end – but when a challenge stage is hectic, the floaty physics of Rayman can start to feel a little capricious, and the weird little death animation of your character inflating and popping grows aggravating.

But the wonderful thing about this game’s structure is that so many options are open to you at once that if you get stuck somewhere you can leave it and go off to seek new challenges for a while, whether that means going back through an older level to find any trapped ‘Teenies’ that you missed (there are ten hidden in each level and three in each challenge and boss fight, and they’re the key to unlocking new levels), trying out the stupidly addictive daily and weekly online challenges in the hope of winning a pointless but much-coveted trophy, or simply replaying an old section that you can’t stop revisiting because lord is it ever fun.

Personally, I can’t stop revisiting the musical sections at the end of each world, in which you move through the level, running, jumping and collecting items in time to music. They are wonderful, inventive, and just beautiful, a natural extension of the game’s already fantastic use of music (in challenge levels, there’s often a general feeling that if you can match the beats of your movements with the music you’re doing well). I would happily play a whole game of them. 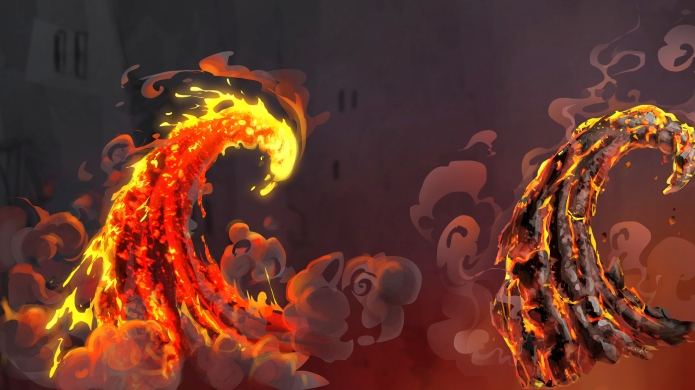 As an added bonus, Legends casually throws in a full forty levels from Origins for you to unlock. Replaying them again, my feelings haven’t changed – these levels simply aren’t as good, and in a way it’s a shame to feel obliged to revisit them to find more Teenies and unlock more stuff. But still, it’s generous addition, since the main game is already so packed with levels and challenges.

Rayman Legends has come right at the end of this console cycle, and in many ways feels like a nice coda for many of the things we’ve learned and debated along the way. It combines the simple elegance, bountiful content and colourful enjoyment of so many indie works with the production values and design genius of the generation’s best Triple-A titles into a game that feels fresh and contemporary, but also mindful of what has come, and worked, before. It’s a joyous marvel of game design, and one of the very, very few straight-up 2D platformers out there with a solid claim to Mario’s crown.
Latest Comments
Link