Gosh darn is Rage 2 bloody fun. Avalanche Studios and id Software’s follow up to the original Rage, which debuted almost nine years ago, is hugely enjoyable during its best and most gratifying moments. Sweeping, high-octane gunplay outlines what is some of the best action shooter gameplay to hit shelves this year. Yet despite all of this it all comes tumbling down when the bullets stop and enemies doused in vibrant red and pink mist aren’t clogging up your screen.

Taking the role of Walker, the last remaining Ranger following a major attack from big-bad General Cross, you're thrown out into the world to recruit three main leaders from around the wasteland and bring the fight to the main enemy faction, The Authority. As well as any other enemy groups sporting punk hairdos and trash-bags-as-outfits that you might come across. That’s about it narrative-wise, as Rage 2 never tries to do anything more significant with its premise or characters or factions you come across. For a world as colourful and delightfully garish as Rage 2’s, the setup is about as basic as they come. 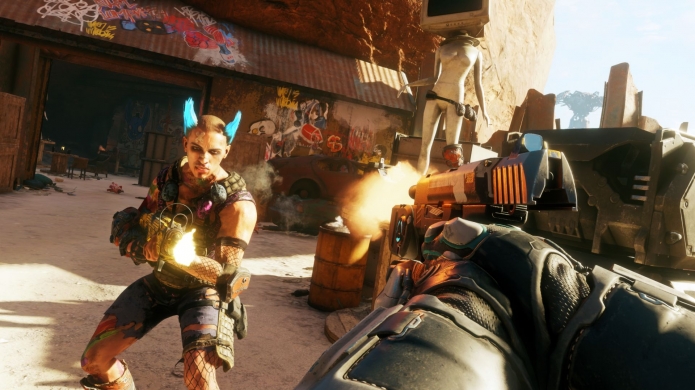 Because of this, the game’s story is easily the weakest part of the game. Capping out at around eight hours, the plot never really takes off in any interesting direction — it’s stock standard action-hero fare. It’s enjoyable in the way it sets up areas to explore and fight in, for sure, but lacks any meaningful character development or plot direction. Over a dozen hours or so I never felt like more than just an errand boy for each of the three main characters throwing me around the world — go here, shoot some guys, come back… it was just rinse and repeat.

"Sweeping, high-octane gunplay outlines what is some of the best action shooter gameplay to hit shelves this year."


Moment-to-moment action, unlike Ranger Walker’s rote journey, is the saviour here. Fast, visceral, and immensely satisfying through and through. Weapons you collect are not only varied but they each have an often surprising and engaging alternative firing function — like the Smart Rocket Launcher’s lock-on system, for example. When taken as a whole Rage 2’s arsenal offers up a range of ways of taking on enemy encounters. And while you start off with just an assault rifle and a pistol, additional weapons are found in Arks: giant fallout-like shelters designed to withstand the cataclysmic effects of an asteroid’s impact on Earth. Visiting these massive structures to pick up new weaponry gives you more to play around with, and that only adds to the fun. Oh, and Rage 2’s shotgun just might be the best digital double-barreled firearm in a long while. 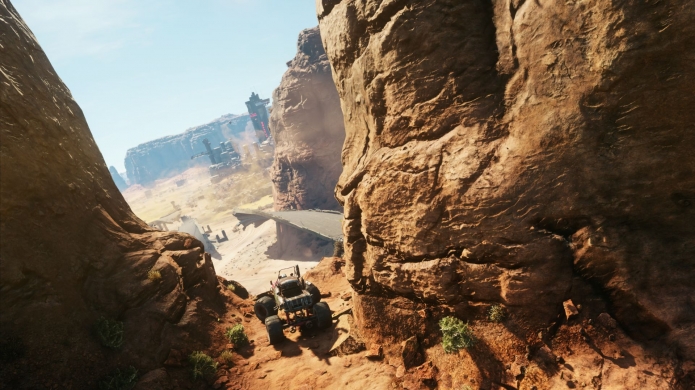 As well as new weapons, Arks also harbour another set of goodies that change up how an encounter plays out, and that comes in the form of Nanotrite abilities. These abilities form an essential part of Rage 2’s satisfying combat, allowing you to dash around areas with ease, launch yourself into the air and slam on enemies, and create shields to save you from enemy fire, as a few examples.

More than anything, these abilities change up every gunfight for the better. What would otherwise be a fairly by-the-numbers shooter is injected with life thanks to the amount of opportunity that surrounds every single encounter. Unlike some of DOOM’s more confined demon-filled spaces, Rage 2 gives you room to move around an area, and each new ability unlocked at an Ark facility feels like a completely new way of taking on The Authority and co. 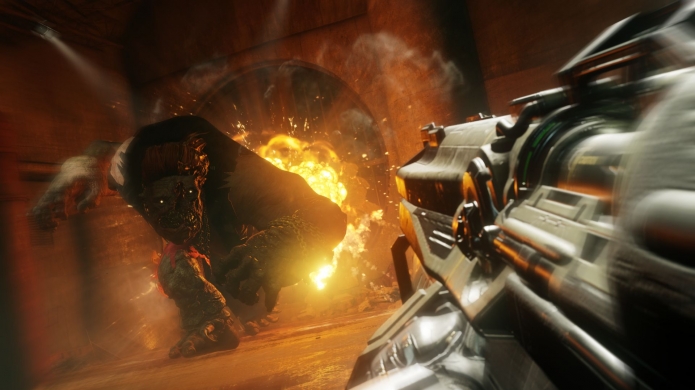 With all of these new abilities and Ranger-enhanced weaponry, the fact that there’s an upgrade system in Rage 2 should come at no surprise. Though, it can all be a bit confusing. As you’re able to upgrade your Nanotrite abilities, weapons, vehicles, and character projects (which gives you perks like being able to reload while sprinting), it’s all well and good until you realise almost all of these upgrades come via different resources.

"What would otherwise be a fairly by-the-numbers shooter is injected with life thanks to the amount of opportunity that surrounds every single encounter."


Feltrite acts as the main resource for levelling up abilities and weapons, though to actually improve and unlock new perks you need to gather Weapon Core mods, Auto Parts, Project Points, and a few others too. It’s a bit overwhelming having so many different resources to collect and make use of, and even now I’m still a little unsure of how (and where) to obtain specific resources. 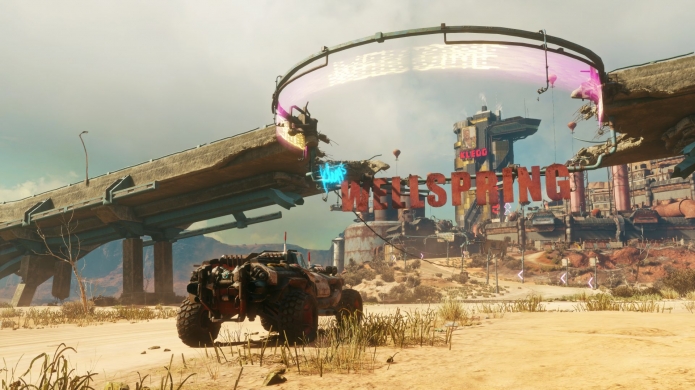 Heading out into the wasteland to collect the aforementioned resources and take out baddies is one of the key cogs of Rage 2, and cruising around the game’s open world is fairly breezy. With a range of vehicles at your disposal, you’re never short of a transport option (and fast travel between towns is also possible). That said, the experience of actually going from point A to point B is mind-numbing thanks to long stretches between anything interesting outside of a nice vista or two.

Each of the three supporting characters that aid you in your fight against Cross have a handful of different side activities assigned to them, and completing an activity will award you experience toward levelling their assigned project tier up. This, in turn, allows you to buy better character perks. During my time trudging through the world I was stopped more than once by a road blocker set up by members of the Goon Squad, forcing me into a firefight for control of the gates. I also consistently stumbled across mutie nests and bandit camps, and enjoyed naturally taking these on as I noticed them. Honestly, I enjoyed these little side activities way more than most of the game’s campaign.

Further to this, Mutant Bash TV, which is an arena-based horde-like mode found in a few spots on the map, continues to be one of my favourite things about Rage 2 - so much so that I keep going back to it to try and improve my score. Which, is based on executing fancy combos with your abilities to rack up points. ChazCar Derbies are also scattered throughout the place, though they’re mostly average thanks to the fairly rough vehicle handling (I’d advise using a controller during races if you’re playing on PC!). Evidently, Rage 2 has its fair share of side content to engage in, even if most of the activities get a bit repetitive after a few hours of completionist grind.

"Mutant Bash TV, which is an arena-based horde-like mode found in a few spots on the map, continues to be one of my favourite things about Rage 2."


It’s worth noting too that during my time with Rage 2 I had a handful of crashes while playing the game on PC. Ranging from hard crashes when manually saving a game to general crashes in-game, as well as NPC dialogue that would cut out every now and again. Most frustrating was Lily, one of Walker’s long-time friends, continuously uttering the same line of dialogue prior to me jumping into a side activity, saying something along the lines of a Ranger always being “prepared for anything”. Bloody hell mate, I’m aware. Anyway, I hope these issues are ironed out with a patch as they’re immersion breakers if I’ve ever seen them. 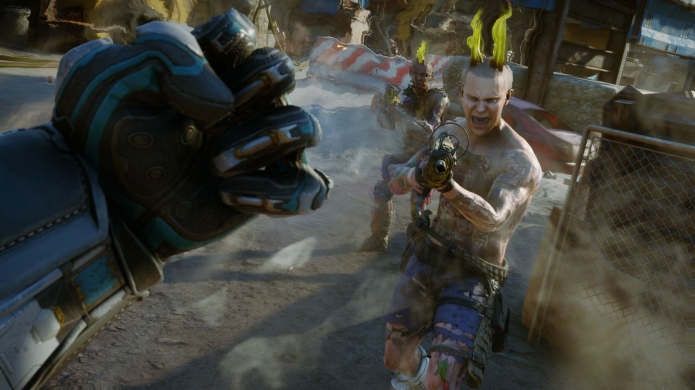 Rage 2 is a good time if you can look past its issues. On one side of the neon-pink fence, the game’s story is frustratingly generic amidst a world of potential. On the other side, the action, gunplay, and variety of things to do is great. Chaining special abilities together to take down mutants inhabiting the wasteland is immensely satisfying, especially when it involves hurling them into spinning blades on ‘Live TV’. In the end Rage 2 is fun for what it is, and certainly hits the right high-octane note when the action gets going. It’s just a shame it can’t carry that momentum through to the other cogs in the machine.
Follow Us
Latest Reviews
More...
News Feed
Advertisement
Latest Threads
Log In
Create Account | Lost your password?