Evocative science fiction landscapes, where the strange blends seamlessly with the understood. From large celestial bodies visible through the atmosphere to creatures that look part-prehistoric and part-otherworldly – perhaps, from some unseen depth of our very own oceans. Lush jungle environments and cloudy mountainous regions filled with the remains of a seemingly long-lost civilisation. Deep cavernous depths filled with strange neon-lit structures, glowing sacs, and large space bugs. Planet Alpha has all of this and more - a staggering achievement in pure imaginative science-fiction art.

Which is probably the best place to begin talking about what is at its core a platform experience, with a flow reminiscent of Another World, Oddworld: Abe's Oddysee, and more recently Playdead’s Inside. Where movement is itself satisfying, conveying a journey through a mysterious land first and foremost. But, when the action so often calls for it - elements of chase, stealth, and plenty of puzzle solving too. Planet Alpha’s wonderful setting drives just about everything, switching up locations so regularly that playing just to see what sight is in store next is worth the price of admission.

Beautiful art direction goes a long way in immersing anyone into a singular location, but the difference with Planet Alpha comes with the truly impressive visual effects that sell its vibrant 3D by the way of 2D world. From the use of light, shadows, volumetric fog, chromatic aberration, reflections and wide range of shiny to not-so shiny surfaces – Planet Alpha is as much a technical tour de force as it is an artistic one. This also applies to the animation which, although shows its scripted hand every now and then, is often wonderfully implemented.

Now, at this point it’s worth mentioning that from a narrative perspective Planet Alpha is mostly ambiguous in how it presents its big moments. Or any for that matter. Meaning is left almost entirely up to the player to decipher, in a dialogue-free and often solitary experience. But even so there’s not a single hint of cynicism or even pretension. The theme of nature being directly impacted and attacked by a hostile and scientifically advanced force – represented here by robots that are strangely cute and reminiscent of tinker toys – is not a new one. Especially within the realm of sci-fi. Where Planet Alpha excels is by reinforcing this theme through player action amidst all the strange and wonderful mystery. 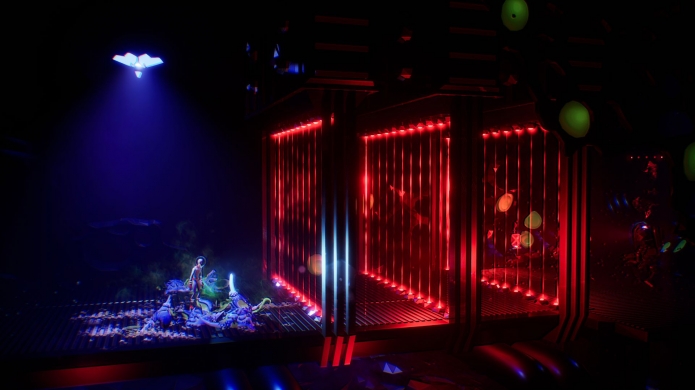 The mystery of entering what looks like a dimensional portal to complete a series of gravity-defying leaps into the unknown only to be rewarded with an alien artefact that seemingly serves no immediate purpose. Or being blessed with the ability to alter the rotation of the planet and move from day to night – often to trigger the arrival of certain nocturnal plants or even move platforms according to the movement of water. But, when you’re freeing a large bug, the very same one that terrorised you earlier, from the shackles of painful experimentation – it’s sense of gratitude as it wildly approaches you afterward feels special. Now, that’s perhaps the most easily understood revelation to be found – but Planet Alpha is full of moments where awe leads to an emotional and resonant response. Where understanding breaks through at a deeper level than surface wonder.

As for the puzzles and stealth elements, the trial-and-error approach ties in thematically to the poetic ending and journey. But often solutions feel hidden behind layers of wonderful art – so, the repetition can grate. Where it alternates from ‘okay, I’ll avoid that next time’ to ‘how exactly do I avoid that’ before you notice something partially obscured or not visibly evident. For the most part this isn’t a problem, and it could even be a direct result of the sheer scope of Planet Alpha – which features over a dozen distinct environments that transition seamlessly from one to the next without any loading or visible break.

Ambiguity is not for everyone, nor is the simple pleasure of walking through a gorgeous sci-fi vista. Replace a few words here and there and that statement that could apply to just about any genre, or style of game. Planet Alpha may not quite have the mechanics to match the sheer variety and wonder of its beauty, but close-enough means that it’s one of the most surprising and wonderful slices of sci-fi we’ve seen this year.
Latest Comments
No comments currently exist. Be the first to comment!
Commenting has been locked for this item.
Follow Us
Latest Reviews
More...
News Feed
Advertisement
Latest Threads
Log In
Create Account | Lost your password?