It may be America’s favourite pastime, but baseball and baseball games have been part of the lounge brigade worldwide for a long time.
Signals from the Mound - Talking MLB The Show 21

Games pushed out during a console’s launch period take on a certain significance that reverberates throughout the console’s life. Few consoles have truly great launches, but the titles that endure are the ones that best show off what the machine is capable of. The Xbox 360’s Arcade service launched with Geometry Wars, an elegant little title that showed what the service was, at the time, all about –- small, cheap morsels of fun with integrated leaderboards and simple gameplay hooks. The Arcade ecosystem changed over time, but Geometry Wars was, against all odds, a big part of the machine’s launch excitement.

Peggle 2, on the other hand, feels like a very strange choice for a console launch exclusive, one that takes the sort of experience that is succeeding on the mobile market and tying it to an expensive new piece of hardware. Peggle is a game of exceptionally simple joys –- the plinking of balls hitting pegs, which is removed from your hands after the initial launch, evokes the Japanese pachinko parlour most strongly. For a Western audience, that curious itch the game scratches is perhaps the same one that gets so many people addicted to the pokies –- you press a button, things light up, and every now and then a big number appears on the screen so you know you’ve done well. There’s more skill involved in Peggle, but not always much more depth…which was fine for one game, but this sequel doesn’t seem particularly interested in actually pushing the formula.

The basic premise hasn’t changed. The central aim of each level is still to clear all the orange pegs on the screen by shooting a ball and hoping that you’ve worked out your angle and timing right so that it’ll bounce around hitting as many pegs as possible. You play through the campaign, unlocking a new ‘master’ (each with their own special power) every ten levels, all the while trying to get high scores and fulfilling extra objectives.

These powers, activated when you hit a green peg, are neat…but the board designs rarely explicitly require them. The best ones allow you to rack up massive scores (one master’s power makes every peg hit immediately light up the two pegs closest to it as well, which can really boost your score), but without any leaderboards integrated right now there’s not much incentive to aim high.

There’s a slightly greater sense of achievement to be had from the game’s ‘trial’ challenges, which are generally focused around using the master’s powers to pull off cool skill shots. Many of them feel like prep work for a higher level of play that will never present itself to most players, or are set up in a way where your progress doesn’t actually feel like an achievement, but the trickier ones hint at the game Peggle 2 could have been, setting moderately challenging tasks in levels that are designed to be tackled in an explicit manner. 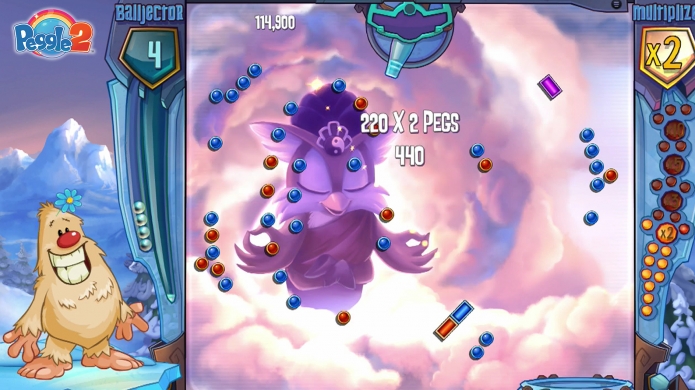 Working out the best approach on some of these levels can be satisfying, and the experience feels a bit more focused. There’s multiplayer too, which is a decent lark –- everyone plays the same board at once, and you’re given score updates after every shot. If the host disconnects the game is disbanded, which is a pain, but otherwise it’s a highlight of the package.

These two modes are a reminder that Peggle is, fundamentally, quite enjoyable. But Peggle 2 is an extremely safe sequel, and consequently a bit dull, most of the time. The first game had a sense of lunacy and inventiveness that’s missing here, outside of the game’s largely excellent soundtrack. If all you want is more Peggle, that’s what you’re getting here, and it’s still fine on a conceptual level… it’s just very hard to get properly invested in it anymore. The casual gaming market Peggle occupied at release has come such a long way that Peggle 2 can’t help but feel a little stale.
Latest Comments
Link