Back in 1999, when Outcast first made its debut on PC, the concept of the open-world game didn’t really exist. The year prior, 1998, saw the release of The Legend of Zelda: Ocarina of Time for the Nintendo 64. A seminal release that represented the sort of large open-world adventure you still see today. Again, the term wasn’t really used as a genre descriptor back then. Far from it, because after all this was a time when the concept of downloading still applied to viewing images online.

For Outcast, with its vast alien landscape to explore, evocative visuals, and freedom to approach just about everything in any order you chose - the term open-world couldn’t be more apt. But as a cult classic from 1999, even back then it was a little rough around the edges. With fiddly controls and confusing mechanics. But for most of us, that didn’t matter. Because exploring the mysterious alien world of Adelphia was akin to being thrust into the middle of a large, detailed, and intricate alien world full of mystery, conflict, and intrigue. That is of course if your 1999 PC could handle it. 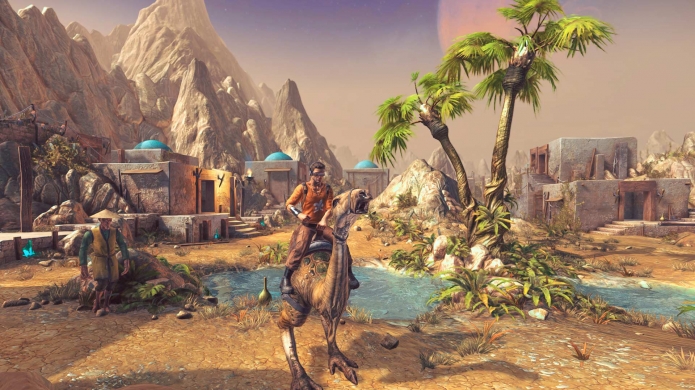 Outside of being known as one of the pioneering entries in the genre we now know of as open-world, Outcast was also a cutting-edge PC game. One that not only pushed the boundaries of hardware in terms of visual effects but in the sheer size and scope of its world. Quite unlike anything ever seen before it blended a wide-range of technologies to pull off its grand vision of a go anywhere, see anything, and be violent if you want to, approach. Perhaps best known for utilising voxel technology to give its world the sort of detail that just wasn’t possible using standard polygons, Outcast was also ahead of its time when it came to the potential of using both CPU and 3D hardware.

But as it was released at a time when 3D hardware was advancing and improving every other day, it wasn’t long before the next big thing came and took the spotlight away. 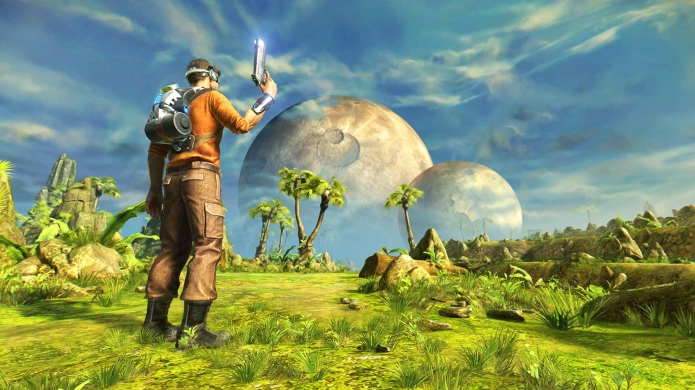 Fast forward to today, and Outcast: Second Contact offers a HD remake in the purest sense of the term. New visuals that offer a marketable improvement over the original? Check. Improvements to the interface and some of the more challenging aspects of the design? Yep. But, outside of the new visual presentation and some minor adjustment this is still Outcast. A title that may have aged as gracefully as any number of early 3D titles from its era, mechanically speaking, but also one that still displays an impressive sense of world building, scope, and character some 18 years later.

And that music, still classic.

So then, what’s Outcast all about then? Well, an adventure through an alien land where you take control of a Bruce Willis ala The Fifth Element type. A wisecracking soldier or tough guy by the name of Cutter Slade, who is sent to the alien world of Adelpha after a little government science experiment snafu. Of the parallel universe travelling and accidental black hole creating so now Earth is in jeopardy kind. And it’s in his first moments in Adelpha where Cutter encounters the natives and the strife and disarray that the world finds itself in. 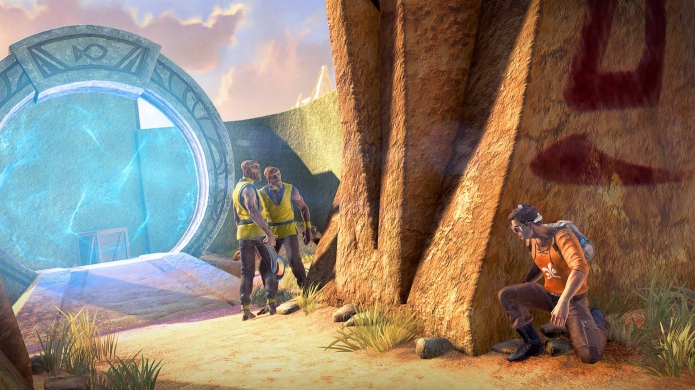 Even though the main mission is to find your crew and retrieve the computer parts or chips or what have you to fix the thing, the save Earth plot quickly takes a back seat to the many discoveries and mysteries of Adelpha and its inhabitants. Without quest markers or identifiers pointing you in the right direction, one of the pleasures of playing the original Outcast, and again with this remake, is the overall setup of just getting around and doing stuff. Non-traditional would be one way to put it, but also an experience that isn’t going to hold your hand or clearly say “go here to find x so you can save y”.

Need to find a character? Ask a nearby farmer or civilian and they’ll point you in the right direction. Need to find out about the mysterious temples and icons adorning the buildings and walls? Ask a healer, or another nearby character a few questions. Discovery through communication is a large part of Outcast. Well, for the first half dozen hours or so. Exploration too. In some ways you can ignore most of the help the locals stuff and instead just hop into the nearest portal and shoot your way through to the next location – but that will only get you so far. 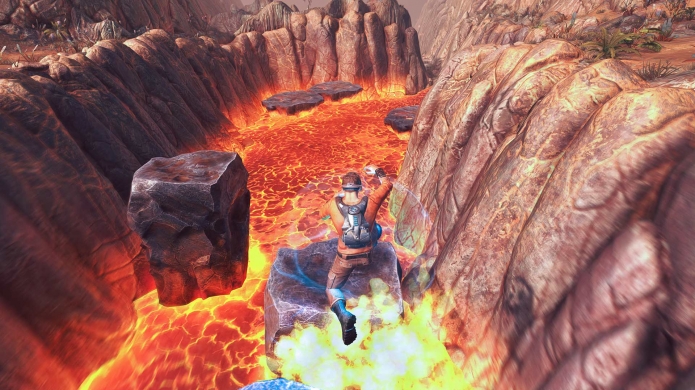 At its core, Outcast is about saving two worlds. One, Earth, that is on a collision course with complete and utter destruction. And the second, Adelpha, well on its way to becoming a totalitarian state where a single leader exerts control over an entire populace. And isn’t afraid to cut their food supply. Now, this might sound par for the course for a sci-fi game, but where Outcast feels different is just how matter-of-fact and genius its presentation is.

One of the first locations that you can freely explore is a lush, green, and vibrant farming region littered with temples. Speak to a farmer and they’ll explain what they do, reference local customs, people, locations, and more, as natural parts of the conversation. Outside of Cutter’s wisecracks, which take some getting used to, it’s the act of figuring out how society works in this strange alien landscape that make this part of the game a joy. And in turn, the plight of the locals becomes something that transcends simple fetch quests or finding mysterious stones of power. 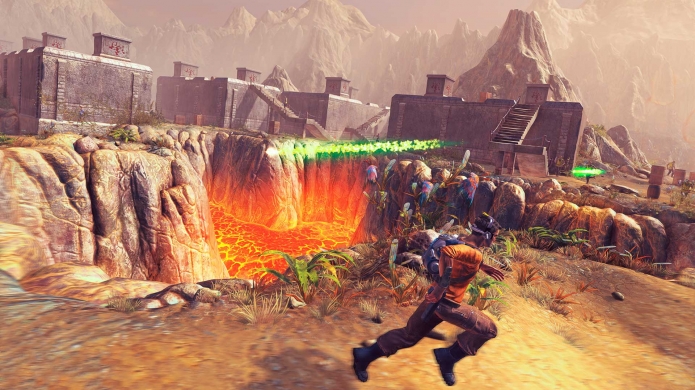 Of which Outcast has a few, what with the spiritual and technological themes running throughout its narrative. Sure, there’s more than a bit of the cheesiness that you’d find in something like Stargate running through the experience, but the open and freeform nature of the journey adds a sense of weight to almost everything. And given the time, you’d be hard pressed not to get intimately involved with the plight of Adelpha and its inhabitants. One of the biggest, and only changes outside of the visual upgrade, is in the streamlining of the conversations. Like fan-subs for your favourite but confusing Anime, the addition of little definitions and explanations for all the terms thrown around is a welcome addition.

As is the ability to turn-on ‘modern health bar regeneration’ and turn-off ‘auto-aim’. Outside of the story, exploration, and puzzles, combat can play an equally big part in the overall story. But underneath the shiny new visuals, Outcast remains pretty much the same. Which means controls and combat that was fine if a little clumsy in 1999 is even more so today. But just like then, it’s quickly overlooked for what is an adventure quite unlike any other. An impressively realised world filled with character, moments of sheer triumph, and charm. Outcast: Second Contact is well worth a look for both fans and newcomers alike.
Latest Comments
No comments currently exist. Be the first to comment!
Commenting has been locked for this item.
Follow Us
Latest Reviews
More...
News Feed
Advertisement
Latest Threads
Log In
Create Account | Lost your password?