The chase sequence has long been a narrative and cinematic tool used to seamlessly or even force momentum, speed, and action into a dramatic tale. In the world of videogames, more specifically the platformer, it usually means running from a large entity or threat taking up one side of the screen. Jumping, dodging, and avoiding obstacles lest your character be swallowed up before reaching the safe zone. Ori and the Will of the Wisps’ chase sequences are notable in that they never feel forced, are memorable, and above all add considerable momentum to an already immersive animated tale.

For all its sheer beauty, for the grand adventure across several stunning environments full of character, detail, and emotion - Ori and the Will of the Wisps will almost always keep you on your toes. Through challenging combat and dexterity fuelled platforming testing one’s ability to switch things up on a dime, this sequel to the breakout Xbox One hit from Moon Studios is a testament to carefully thought out and meticulous design. 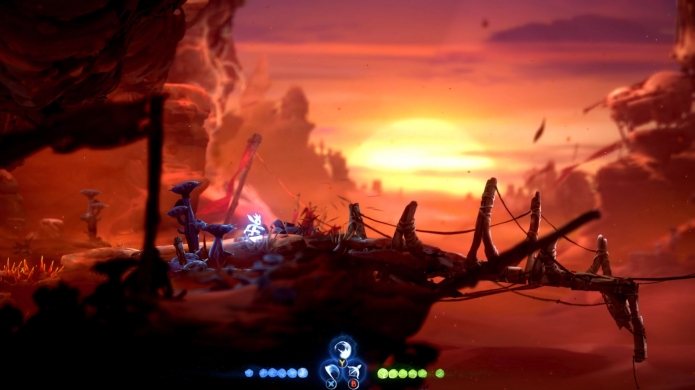 At its core this is a mostly non-linear action-adventure in the Metroidvania style, where exploration and puzzles go together with abilities, player skill, and growing in power. Ori and the Will of the Wisps is a prime example of just how engaging this sub-genre can be, especially when everything comes together just so. An experience where you begin to question if such a traversal move is possible, can it be done – is that really the way forward? The answer is almost always yes, and in this regard the sheer speed, fluidity, and scope of Ori’s fundamental movement – that is moving the analogue stick so the glow-y spirit thing can do its thing – is phenomenal.

“For all its sheer beauty, for the grand adventure across several stunning environments full of character, detail, and emotion - Ori and the Will of the Wisps will almost always keep you on your toes."


But, the first thing that hits you and continues to do so with Ori is without a doubt its presentation – a painterly art style that is part-Pixar part-Studio Ghibli and wholly original. Paired with wonderful animation and a soundtrack that keenly evokes a range of emotion – Ori and the Will of the Wisps presents a lengthy story full of surprise, heart, and thematic weight. Focusing on anger, love, resentment, friendship, and larger spiritual themes allows individual character moments to shine and even pure gameplay ‘chase sequences’ to feel as cinematic as they do intense in what they demand in terms of raw skill. 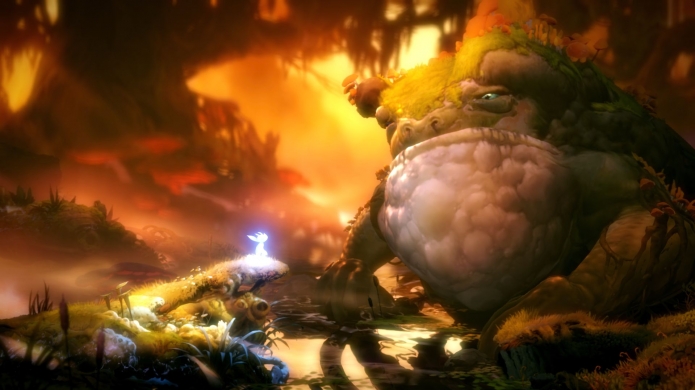 The bonds of friendship, parental instinct, nature out of balance, universal ideas presented in a style that doesn’t require much in the way of dialogue or text – all the big beats are told via action, music, and animation. Being able to see and read intent, feeling, and concern in the face of an animated character is part of the reason why comparisons can be made to giants like Pixar and Studio Ghibli. It’s a feat that is subtle yet immediate, and Ori and the Will of the Wisps shares visual detail and scope alongside the depth of the action-adventure platforming that make it a game.

Again, on that front, Ori moves fast. With almost Sonic the non-glow-y blue dude levels of speed. Being able to jump, double-jump, dash, launch, and bounce around leads to sequences that are seemingly pixel-perfect in the execution required. With boss battles and combat that draws on abilities learned, upgraded, or otherwise chosen from a pool, a similar challenge permeates the action side of the experience too. Getting from one area to another, the physical act of solving a puzzle after working it out, running from a screen-filling menace through several obstacles, taking on various melee, flying, and projectile-based creatures-gone-bad – it’s all, well, intense.

Yet, weirdly not at odds with the vibrant earth tones found throughout many of the environments and the dramatic and euphoric score that drives you forward. There’s an interplay between location, story, and mechanics that is pure videogame. Invisible lines separate these key elements, with a split that is fractionally perfect. Moving through a windswept frozen mountain, lighting fireplaces and torches can bring dormant entities to life. Turn ice into water. Putting the same fire out can create a frozen platform in which to propel from.

“The first thing that hits you and continues to do so with Ori is without a doubt its presentation – a painterly art style that is part-Pixar part-Studio Ghibli and wholly original."


A dark cave where the void will gladly take Ori in a matter of seconds, staying within the light is key. Whether that’s moving from glowing fauna to glowing fauna or following the lone-lighthouse-like respite of a firefly. The inability to see your surroundings paired with tension-filled musical chords, it’s specific moments like this that showcases Ori and the Will of the Wisp’s minor flirtation with horror.

Interestingly, for a game as challenging and varied as Ori and the Will of the Wisps the save-system is quite generous - in that checkpoints can be found anywhere and everywhere, rarely ever setting you back more than few seconds. In a way this both lessens the severity of any punishment doled out for failure whilst also giving the development team the freedom to not ‘waste any space’. Going back to the word meticulous, in Ori and the Will of the Wisps the only time you’re presented with a flat linear pathway or simple platforming is when the action calls for a break – be it for story or a brief moment before a large-scale encounter.

The sheer variety that can be found in each corner of the world, the look and feel of the environments and the layout of the ‘levels’, the complexity of the mechanics you need to learn, it’s as commendable as it is complex. Paired with a progression system that works in unison with exploration and finding secrets, it’s also not without fault. Or, a few rough edges. Some of the abilities lack finesse in execution – giving off the same feeling one gets when playing a game with noticeable input delay. Also, there sheer number of combat abilities you can learn and map to one of three action buttons feels like a little too much. Depth for the sake of depth, adding more when a handful of varying playstyles and combinations is more than enough.

With fast and fluid traversal these slight hiccups, alongside an engine that enjoys the odd stutter every now and then and a map screen that lags, are noticeable. And can detract and pull you out of a scene or sequence – forcing a mental reset. Not to mention a full game reset if abilities begin to act strange or glitch out. Technical issues can always be ironed out, especially in age of the day one patch (of which Ori is set to receive in time for launch). But they’re always worth exploring, especially in the context of a greater review – and the possibility that they could linger for days, weeks, or even years. When it comes to Ori and the Will of the Wisps, the memories that linger are the ones that matter.

“The sheer variety that can be found in each corner of the world, the look and feel of the environments and the layout of the ‘levels’, the complexity of the mechanics you need to learn, it’s as commendable as it is complex."


Memories that deal with story beats and individual character moments, darkness and light, warmth and despair. Emotional and tension-filled sequences that impress in their fundamental design, execution, and your own ability to somehow find the skill and will to get through them. Perhaps the biggest problem with a game that is simply this gorgeous to look at, is that even the slightest of frame-rate hitches feels like a betrayal. A betrayal to the expectation of perfection you get as soon as the adventure begins. Ori and the Will of the Wisps isn’t perfect, but its issues are mere momentary lapses in an otherwise stellar action-adventure. An experience that feels monumental in both scope and presentation.
Latest Comments
No comments currently exist. Be the first to comment!
Commenting has been locked for this item.
Follow Us
Latest Reviews
More...
News Feed
Advertisement
Latest Threads
Log In
Create Account | Lost your password?