Surprise is rare when approaching an action-adventure side-scroller, a presentation and style that has existed in one form or another since the dawn of the videogame. Mechanically you sort of know what to expect, even though there’s still plenty of room for identity and a unique feel to cut through. From the Kyoto-based Skeleton Crew Studio and Devolver Digital, Olija presents that rare feeling on multiple occasions. That sense of being unsure where a door will lead, or what you might find. 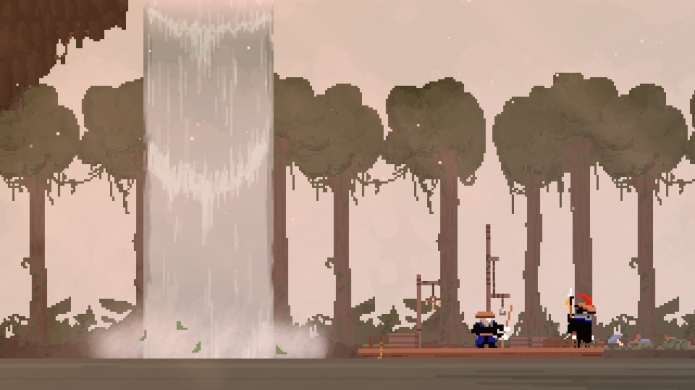 This lends itself to adventure, discovery, and spontaneity. There’s as much of a focus on world-building and the meaning behind the somewhat sombre story of a land overrun by darkness as there is on the fast-based combat. As Faraday, the setup is simple, you’re a lone shipwreck survivor left to pick up the pieces, rescue those lost or trapped, and lead them through a fantastical world. Rebuild.

Olija presents that rare feeling on multiple occasions. That sense of being unsure where a door will lead, or what you might find.


Olija is a little strange too, but in a good way. What’s presented feels personal and specific in its themes and the environments that blend beauty with hope, despair, and destruction. Faraday feels different to the many he comes across, not only in terms of race but in purpose and stature. Setting up a port on which to embark on missions (i.e. progress through the levels in a mostly linear fashion) there’s that touch of the spiritual, a larger story at play with the fate of everyone and everything at stake. 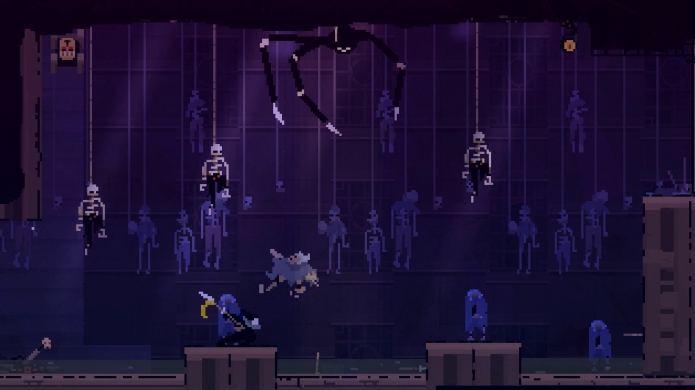 Olija does all of this using minimal pixel art, with what you’d might call 2-bit graphics – chunky angular objects with very little in the way of granular detail. Characters where a handful of pixels are used to create limbs or a weapon. Olija cleverly uses the scalability of its presentation to zoom-out or zoom-in at different moments to present a more detailed image or to focus on one or two lo-fi elements.

This leaves a portion of the visual slack to be picked up by the animation, which is full of character and wonderful. Also, up to the level of the intuitive and fast combat. Armed with a legendary harpoon that can be used as a throwable and a means to warp and dash around the map (via that age-old hero-to-harpoon connection that runs deep) Olija;s combat is both engaging and challenging when it needs to be. 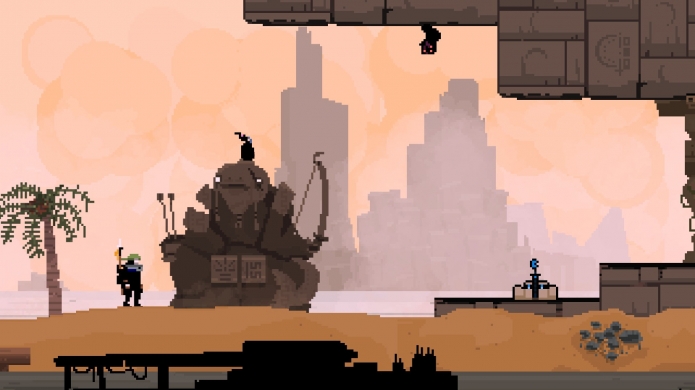 Although Olija isn’t a very long game, it also never settles on a groove or specific flow. Combat is fast but other aspects are, well, slow. That surprise hinted at in the intro extends to the what you do too, the introduction of stealth, puzzle-solving, ability-juggling platforming challenges, boss battles, and ‘survive the horde and escape’ sequences. The soundtrack nails the tonal shifts too, and the use of varying themes and instrumentation compliments the on-screen action and overall narrative.

Although Olija isn’t a very long game, it never settles on a groove or specific flow. Combat is fast but other aspects are, well, slow.


It’s not all seamless, exactly how it’s blend of home-base to expedition works takes a while to become apparent – leading to some confusion. The combat too and dashing about is a little imprecise (even when using a d-pad) which can lead to some frustrating boss encounters. In the end, through brevity, variety, and focus, Olija is a rewarding slice of action, contemplative fiction, with great action-adventure design.
Latest Comments
No comments currently exist. Be the first to comment!
You must be logged in to post a comment. Log in now!
Follow Us
Latest Reviews
More...
News Feed
Advertisement
Latest Threads
Log In
Create Account | Lost your password?