Criterion Games singlehandedly saved the Need for Speed series back in 2010 with the release of one of this generation’s finest arcade racers, Hot Pursuit. Despite EA’s best efforts to run the franchise on the smell of an oily rag, churning out annual iterations with the bare minimum of effort, Criterion’s knack for light-speed velocity, glorious graphics and addictive aggression injected the series with a blast of refreshing nitrous. It might have taken multiple patches for the PC version to overcome the fact that it initially ran like a V6 with a couple of dead cylinders, but the fact that it still resides on my hard drive to this day is testimony to its quality.

Hot Pursuit generated enough cash to buy out Ferrari’s entire supply of 458 Spiders, so it’s a little puzzling to see Criterion abandon the cops ‘n racers gameplay in its latest game, Need for Speed: Most Wanted. Cops are still present, but they’re a minor speed bump rather than half of the driving experience. The star of the track this time around is the environment, the sprawling city of Fairhaven. Your first few laps will reveal a city packed with towering skyscrapers surrounded by mountain roads, but further time behind the wheel reveals a myriad of nooks and crannies offering wildly different styles of driving. Underground tunnels, unfinished construction sights, railway lines and many other areas all change up the tone and feel of the driving, and half the fun is simply finding them.

You’ve been given the keys to the city, along with the keys to 42 vehicles, with absolutely no restrictions on where you can drive. It’s a relatively small selection of cars in an overwhelmingly huge environment, but there’s none of the four-cylinder filler found in games like Forza. Each and every vehicle here is as desirable as it is impressive, with the usual suspects such as the Lamborghini Countach parked alongside more interesting oddities like the Tesla Roadster. Just 10 of these cars are unlocked by events; the driving seat of the other 32 will accept your warm buttocks instantly, provided you can find where they’re parked. While this does allow newbies to jump straight into the more powerful rides, I found it also removed the urge to complete events. Race wins are instead rewarded with slightly less exciting mods like off-road tyres or bash-happy bodies. There’s no narrative either, drip feeding the player a sense of progression via cut-scenes. Instead we’re given race intros that look as if they were created by Hunter S Thomson in an LSD factory, like this bizarre effort:

Each car comes with five events, giving a potential total of over 200 events. In reality it feels closer to 75 though, as many of these events are shared between vehicles. I enjoyed the straight up races the most; hooning against a dozen other exotic beasts through every inch of Fairhaven’s glorious streets and tracks. Police chases rear their head frequently, and vary wildly between being a high-speed hoot and a 15-minute bout of frustration, all depending on how willing the cops are to use their rubberbanding super powers. Extending the concept of Autolog first unveiled in Hot Pursuit, the city is dotted with speed traps and billboards. Soar through a billboard and your ugly Gamertag mug will be populated on all of your friends’ billboards, regardless of which platform they play. Speedtraps similarly display all of your friends’ speeds, urging you to outdo their best. There’s even an Autolog recommends section in the Easydrive menu, showing you which events you need to play to show your pals a thing or two.

While most of these events are enjoyable, the overall single-player package feels a little soulless. With most cars unlocked from the get-go and no storyline to usher you onwards, the most compelling reason to keep driving is to explore the city. Thankfully that’s reason enough. Criterion has crafted an open world environment that ranks alongside Sleeping Dogs and GTA IV in terms of complexity and detail. Cruising through sweeping mountain roads, passing over river-spanning bridges and ending up in the claustrophobic CBD never gets old, and the day/night cycle makes every area look different depending on the time of day. Matching the city’s stunning aesthetic are the equally impressive cars, which capture their real world relatives right down the individual wheel lug nuts. Car undersides are incredibly basic though, a very strange design decision given the amount of time you’ll spend upside down. 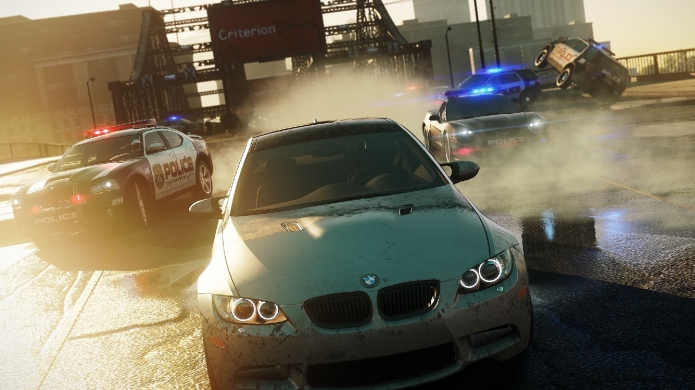 The best way to tour Fairhaven is in the game’s multiplayer mode. In a stroke of utter genius, Criterion has set up each game so that players participate in five different events before the match ends, removing the hours of menu-gazing that accompanies most other online racers. Each “Speed List” of five events will usually have a race or two, with the rest being novelty events that fans of Burnout will know all too well.

Group drifting, jumping, and crashing are just some of the ways to destroy your supercar in seconds. Players have to drive between events, and they’re rewarded for taking out other drivers while doing so, so you can probably guess the result – a non-stop demolition derby. This same mindset even extends to the events. Once you’ve set a decent drift or time, you’re encouraged to take down another driver and remove them from the event. It’s fun for the first few hours, but after a while I found it a little skill-less – half the time I wouldn’t even have a chance to start the event before I was smashed into tomorrow. Contributing to the problem is the fact that online takedowns often seem totally arbitrary, probably as a result of netcode that often does things like this:

This is most likely due to the lack of any server browser, with the game using a matchmaking feature that doesn’t allow for region selection. As you can see, the online choices are rather limited:

Despite these issues, when you do get into a match filled with local lag-free players who would prefer to race rather than play dodge ‘em cars, the driving on offer is exhilarating. Speeding through this beautiful city at 250km/h, drafting in the slipstream of the car ahead as it weaves through traffic – there simply aren’t any other racers that offer this style of driving. If only the cops were present in multiplayer it would have been perfect. That, and a silky smooth frame-rate.

Unfortunately Need for Speed Most Wanted is currently the most demanding PC game in existence. My i7 3770K (overclocked to 4.5GHz) with dual GeForce GTX 670s often chugged down to a frame-rate in the 30s, and these performance issues are hitting all PC players of the game, even when running systems like mine on medium to low settings. I hate to penalise a game for something as trivial as the frame-rate, but racers are reliant upon a smooth display to feel just right, and Most Wanted’s hiccupping, stuttering mess really detracts from this. Hopefully a patch or three will fix it in the same way Hot Pursuit’s performance issues were ironed out, but in the meantime the PC platform can be a frustrating slideshow at times.

It’s hard to recommend Most Wanted to those who prefer to race offline, as the sterile event structure isn’t enough to keep players driving after the thrill of exploring the city wears off. It’s a much more enjoyable game online though, provided you don’t mind getting rammed every 30 seconds. The multiplayer racing is fast and filthy, where you’ll be rewarded for crashing into every opponent more so than taking a clean line. Unfortunately a few rough edges, namely low performance and lag, regularly detract from the online insanity. Thankfully they’re not game-breaking issues and, if Criterion can solve both, Most Wanted will easily rate alongside the venerable Burnout series as the best drive on the open road.
Latest Comments
Link