“From North Carolina... at guard... 6’6... Miiiiichael Jorrrdan!” with that iconic introduction, arguably the greatest player to grace the basketball court returns, albeit in digital form. NBA 2K11’s main focus is on Michael Jordan, as it should be – just gracing the cover alone should be enough, but he features heavily enough in the game this is a sure-fire purchase for any basketball aficionados out there.

The centrepiece of the game is the Jordan Challenge, where the aim is to attempt to recreate some of Michael Jordan’s most memorable achievements. In total, there are 10 challenges to beat, such as “69 Points”, when Jordan scorched the Cavaliers for 69 points in 1990. The challenges themselves are, as the mode title suggests, quite a challenge. Players will only have four 8-minute quarters to complete objectives, which also includes reaching other milestones other then points scored, like assists and specific field goal percentages. You’ll need to spend a considerable amount of time to complete the tasks, as challenges like the “1991 NBA Finals” take place over a few games. While difficult, completing the tasks is incredibly satisfying, but it’s the playing of these games that is so amazing – you’re reliving games from the golden era of basketball, when Jordan dominated. 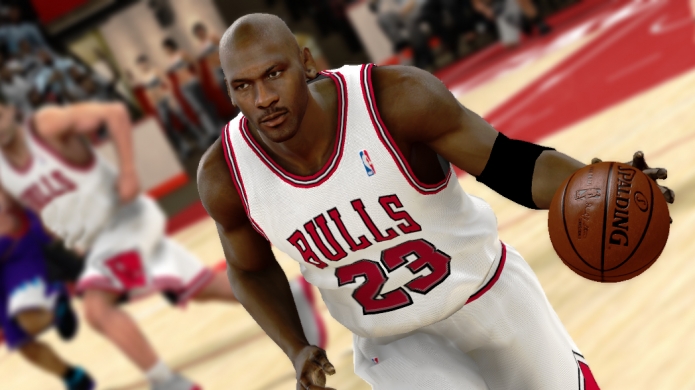 The reward for completing the Jordan Challenge is definitely worth it, as you unlock the MJ: Creating a Legend mode. This is the My Player mode, only you get to guide Michael Jordan throughout his career, from a rookie to a legend, with any current NBA team. So you can team Jordan up with Kobe at the Lakers, or even add him to the already talent loaded Miami Heat. Imagine a team of James, Wade, Bosh and Jordan! That team is a sure thing for a championship. Also, Jordan begins with a rating of 79 rather than 30 which is the starting off rating for a created player in the regular My Player mode.

The amount of detail gone into this game to recreate the Jordan era is remarkable and really transports the player to that time period. Teams featured in the game include classics such as the 94-95 Bulls, 85-86 Celtics, 90-91 Lakers and my personal favourite, as I grew up watching the alley-oops of Kemp and Payton, is the 95-96 Sonics. The starting line-ups for these classic teams are filled with legendary names such as Magic Johnson, Larry Bird, Dominique Wilkins and Scottie Pippen, but many of the bench spots are made up names, which is a bit of a shame. This is probably due to the fact that 2K weren’t able to obtain the rights to include these player’s names and likeness.

To further the era-specific focus, the commentating crew will also discuss specific incidents that relate to certain time periods. An example of this is when you play through the 1991 NBA Finals series between the Lakers and the Bulls, the announcers will mention issues such as the Bulls being rusty due to a longer break between games and James Worthy’s dodgy ankle.

The player models and likeness’ in NBA 2K11 are superb, especially the attention to detail, such as the sweat dripping off players as the game progresses. Classic players who appear in different eras have been modelled to match the way they looked that year. A perfect example is Sam Perkins, who played with the Lakers, then with the Sonics. Early 90s Perkins has a nice flattop, while mid 90s Perkins has a fuzzy hairdo. The game captures specific player movements and characteristics, and this is most evident in Michael Jordan’s moves. You’ll see some of the great aerial moves that made Jordan famous, as well as little things such as Jordan’s one handed fake. It’s the attention to detail that allows players to really get into the game. 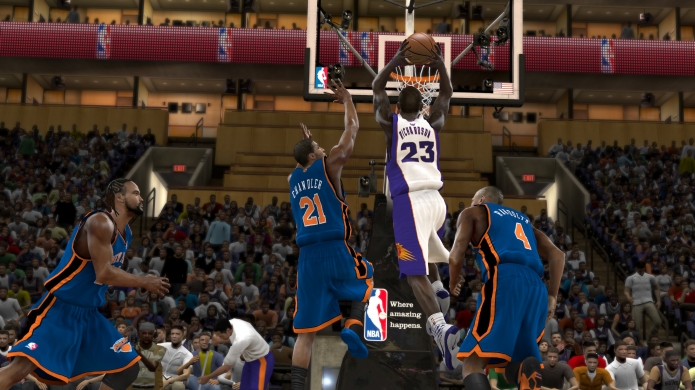 The non-Jordan features throughout, such as the Association and My Player modes, have had improvements that make it more user-friendly and enjoyable to play. In Association, players take on a NBA franchise with the goal to creating a dynasty. This mode is solid, and the additional tweaks improve the mode further. Firstly, players have the option of customising the draft class for the NBA Draft, including downloading files via 2K Share. Another new addition, which made trading simpler and much easier, is the Trade Finder. With this feature, you choose the player that you want and the Trade Finder will come up with scenarios that will work. No more figuring out which player should be added so that you don’t go over the salary cap.

The improvements in the My Player mode now allows your created player to talk to the media via press conferences, obtain endorsement deals and demand trades. It’s more of an all-round career mode that includes both on and off court areas of a NBA player’s career. The teammate rating system is now much more user-friendly, with a meter system that tells you exactly how much you need to move up a grade. This addition was probably the most helpful improvement in the game for me. My gripe with the My Player mode is that the player’s starting rating of 30 is just too low. Sure, you’re gifted skill points which raise your rating to around 40, but with such a low skill level, it’s very difficult to earn the points needed to improve the player. You’ll find yourself relying only on certain drills to earn points, as the majority of the drills will be difficult.

Newcomers to the game may initially struggle with the complexity of the controls and may feel frustrated with the movement of the players, as you won’t be able to run past the defender and dunk the ball every time. Rather, you’ll need to use tactics such as screens to find the open man to score baskets. This is one of the reasons, that NBA 2K11 is arguably the most realistic basketball sim today. The IsoMotion dribbling controls create a fluid transition of dribbling moves that look impressive, and helps to create a sense of realism, while leaving your opponents with shattered ankles. 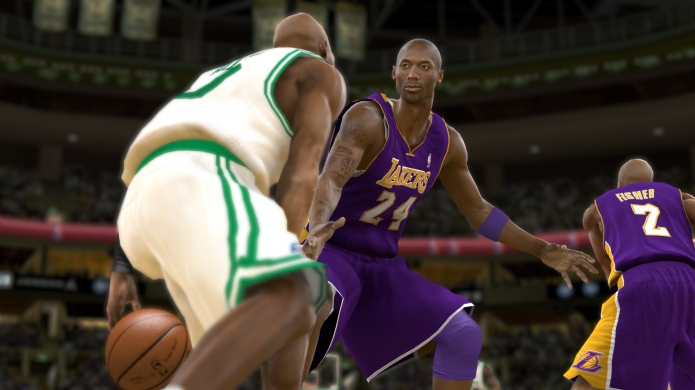 For PS3 owners, NBA 2K11 integrates Playstation Move controls. For games such as baseball and golf, this is an excellent addition, but for basketball - not so much. I found myself getting flustered trying to swing my right arm up and down trying to shoot, while moving the player around with my left hand, and I consider myself to have great coordination.

The NBA 2K franchise, with its realistic gameplay and excellent game modes, would have to be considered the best basketball title in the market today, and the addition of Michael Jordan only strengthens an already excellent game. NBA 2K11, for me was about nostalgia, and being able to relive some of the magic of the time when Jordan ruled the court.