The day Meal Gear Rising: Revengeance was announced, or as it was originally named Metal Gear Solid: Rising, you could almost hear the fans’ cries of blasphemy. How dare anyone other than videogame’s favourite one-eyed Snake headline the series?

Well allow me to continue the affront to the holy quadrilogy. Not everyone in the world loves Metal Gear Solid. There. I said it, and I’m not sorry. Some, such as myself, like the ideas and settings but didn’t exactly find the gameplay our cup o’ tea.

Should we be denied the opportunity to delve into the warped universe of Hideo Kojima’s making? No. No we shouldn’t. Those who prefer their gameplay a little more blood-soaked with a sharper edge to it will feel right at home in this surprisingly engaging and beautifully constructed (for the most part) spin-off. 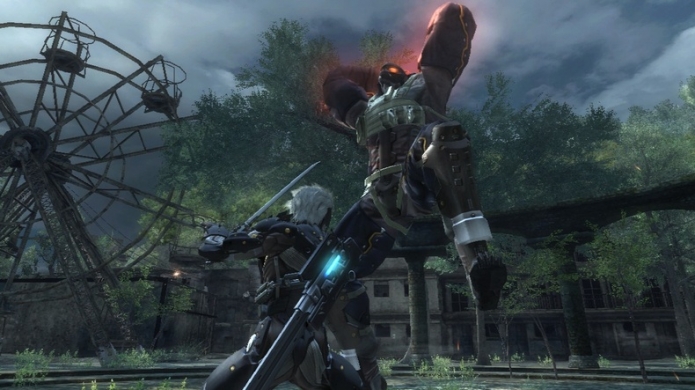 Enter Platinum Games, a developer known for ball-breakingly tough and incredibly stylish titles the likes of Vanquish and Bayonetta to name but two, and the perfect choice to take this offshoot of Metal Gear Solid into a significantly more action-heavy direction. The focus switches to Raiden, a cybernetically enhanced soldier with a penchant for elongated Ginsu knives and an extremely checkered, almost tragic past.

Cutting his teeth as a child soldier in Liberia he became all too comfortable in the arena of war with the horrors by his own hand on the battlefield earning him the moniker of Jack the Ripper, as he gleefully bathed himself in the blood of his enemies. Haunted by his past deeds he has dedicated himself to making sure his fate doesn’t befall others. He has reinvented himself as a dark anti-hero. He prefers to protect the innocent to wash away the sins of his past. A noble cause indeed, but will holding his murderous tendencies at bay only cause them to bubble to the surface? This is one of the concepts Metal Gear Rising: Revengeance lightly delves into, but more on that later.

We meet up with Raiden as part of an African Prime Minister’s protection detail. He’s aligned himself with a multi-national, ethnically diverse Private Military Corporation (PMC) codenamed Maverick. The convoy under his protection is attacked by rival PMC Desperado and the Prime Minister is abducted and summarily executed in a particularly grotesque fashion. Raiden finds himself outgunned by enemy combatants with cybernetics far outstripping his own. Beaten almost casually by the cyborg Jetstream Sam (where do they come up with these names?), relieved of an arm (again) and an eye and barely clinging to life, he has but one thought on his mind: revenge. Or is it vengeance? Let’s split the difference and say revengeance. Raiden’s after a little more payback than an eye for an eye, and he’ll get it. We can rebuild him, we have the technology.

Cue Raiden 2.0, bigger, better and significantly more bad-arse. His new enhanced exoskeleton takes a lot more punishment and his new blade abilities allow him to cut more precisely than a Gillette Mach 5. As he heads off on the trail of Desperado it becomes apparent this is a much more personal mission for Raiden and a particularly confronting one at that with human trafficking and harvesting vagrant children for organs but a few grizzly checkpoints on your journey. 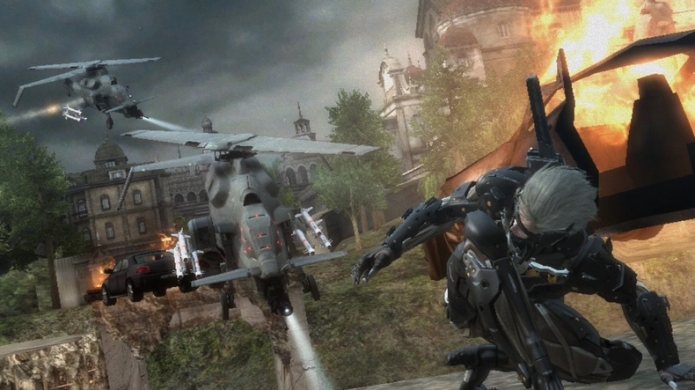 Through his actions he’s forced to confront his past as he attempts to work out the kind of man he is. It becomes a real Jekyll and Hyde sort of deal as you start to consider what exactly motivates Raiden. Is he really the protector of the weak as he claims, or is it all just an excuse to slaughter countless adversaries to appease Jack the Ripper’s bloodlust? There are some truly unexpected emotional moments that are sure to surprise you, I know they did me.

But enough of the cerebral play-by-play, it’s time to get on with the killing and what a gloriously macabre dance of death it is. The whole cybernetics issue has given Platinum Games license to be as nasty as it wants to be and it makes titles such as Ninja Gaiden seem pedestrian in the blood stakes comparison. Your go-to weapon, your blade, has had an upgrade allowing you to enter Blade Mode to slow down time and precisely carve a swath through an adversary, and chop them up into itty bitty pieces at your discretion by flicking the right thumbstick in the desired direction. It is intuitive, feels completely organic and it never, ever gets old.

Once you’ve suitably softened up your opponent you can enter Blade Mode and you’ll notice a sweet spot highlighted. Cut directly through it and you’ll prompt a quick-time button press. If successful it causes Raiden to rip out your enemy’s spine for an immediate full health and Blade Mode meter recovery. You’ll find yourself slowly whittling away at soldiers one at a time to maximize the carnage and it’s just so dammed much fun doing it. You can also dis-arm selected officers, literally, and use the information stored in the severed appendage to earn passive upgrades.

The best plan of attack is a mesh of classic Metal Gear Solid and MGR: Revengeance. Stealth is initially the best option. You can hide in a box or drum and slink on past like a pansy if you want. Or, you can sneak up and thin the herd, as any enemy is a one hit kill from behind. It works quite well for the most part though sometimes it is a little unresponsive and imprecise when you appear to be in the optimum position to strike. 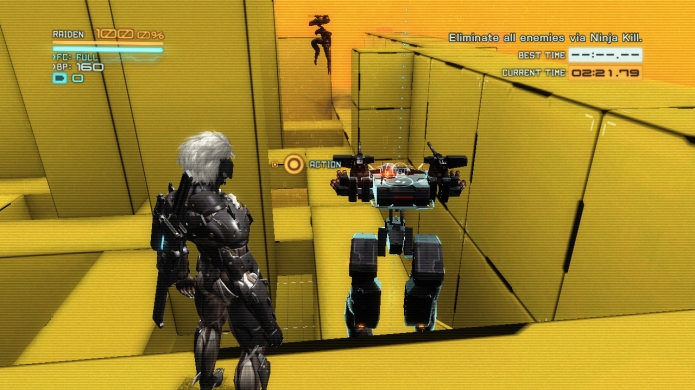 You can also see enemy positions using AR mode. It works similarly to Batman: Arkham City’s Detective Mode by sending out a sonar pulse which marks enemy positions and items of interest. Methodical exploration is a vital component to ensure you have ample health regen packs, uncover hidden replayable VR missions as well the usual hard to reach boxes containing items giving you bonus upgrades. Planning and preparation are the keys to winning any battle. Well, that and a decent sidestep. I highly recommend that’s the first upgrade you get. You can thank me later.

You’ve also got access to secondary weapons the likes of grenades and launchers for more collateral damage and once you defeat the to be expected bosses at the end of almost each level you’ll take their unique weaponry as a trophy and be able to use and upgrade those as well. Without giving too many of them away the Pole-Arm is ideal for keeping enemies at arm’s reach. The Sai is a far more elegant and precise weapon prefect for close range, stunning attacks and can even drag you across distances directly to your enemy. Those who prefer something a little more earthshattering will be right at home with the Pincer, which delivers slow but devastating attacks. No matter your taste there’s a sub-weapon for everyone.

While I’m talking boss battles the ones you’ll encounter though tough, as to be expected from Platinum Games, are not painful or as brutalizing as its previous efforts in the challenging Bayonetta. Well, until about the halfway mark where you meet up with Monsoon and bullshit difficulty mode kicks in. It definitely caught me off-guard as did the difficultly spike. The extended brouhaha felt more like a marathon and will test your mental stamina and blocking endurance. You’ve been warned.

The overall pacing is bang on with moments of respite between frantic skirmishes against monolithic adversaries and you feel a genuine sense of accomplishment taking them down. There are usually some insane coup de graces such as leapfrogging along a missile barrage to cut down a Metal Gear, offset by a chase sequence running down the face of a clock tower as it explodes or Ninja Dashing your way through a skyscraper as each floor is blasted to smithereens. Each event is accompanied by a fantastically rich, deep and emotive score with all the bluster of a Hollywood blockbuster artfully complimented by a guitar heavy backbeat for boss battles. The balance is just right and suits MGR: Revengeance perfectly. 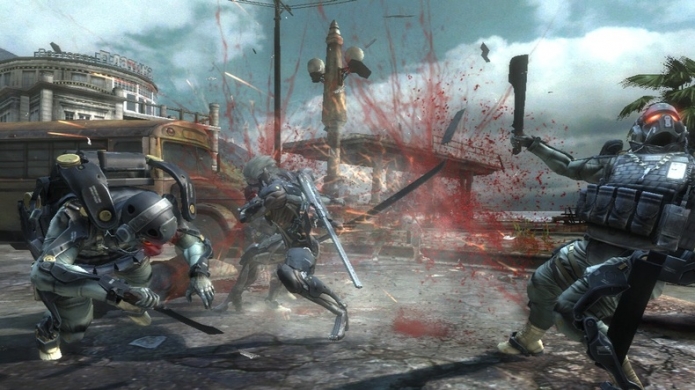 Purists can rest easy as there are more than a few nods to the parent franchise in tone, enemy types and winks to the player that even the most casual Metal Gear Solid fan will quickly recognise. The ringing of your Codec, the audio cue when guards are alerted (with the trademark exclamation mark - !), cardboard boxes and drums to hide under and even the cheesecake posters depicting scantily clad Japanese hotties are all there. It gives MGR: Revengeance a distinct Metal Gear Solid undertone and although it plays drastically differently you feel part of the same canon, inhabiting the same universe.

This is coupled with the Kojima brand wacky sense of humour with some truly memorable moments. Raiden jokes with his robotic quadraped unit ‘Wolf’ about giving it a bone to chase. His disguise to remain inconspicuous in Mexico consists of a sombrero and poncho masterfully pulled over his cyborg exoskeleton and then there’s the completely out of place little Jamaican boy he rescues in the sewers exclaiming once he sees Raiden, “A ninja? Cowabunga! Go ninja go ninja go!” Vanilla Ice would be proud.

There are a few issues that hold MGR: Revengeance back. The previously mentioned inconsistencies with its stealth are one as well as a few little bullshit boss moments where they wail on you even when you’re pretty sure you’ve dodged out of the way. These are fleeting, though. The camera is a bit more problematic. Most of the time it works like a charm, but it gets temperamental when your back is up against the wall or you’re stuck in a corner. Enemies can be extremely cheap when it happens and will mercilessly gangbang you especially indoors, which you’ll have to deal with for several chapters and it can get frustrating.

Metal Gear Rising: Revengeance pays homage to the parent series enough to keep steadfast fans happy, though doesn’t get so lost in the canon as to alienate newcomers. The action is tremendously addictive and will keep you coming back for more. The most pleasant surprise was the mature plot and gruesome execution both literally and figuratively. It deals with the nature of war, the heavy toll it inflicts and those callous opportunists who see it as a business and humans as merely a commodity. It had me pondering the consequences of Raiden’s/my actions, not for long mind you, but I considered them none-the-less. Something that lets you hack and slash, laugh your arse off at times and use your mind-brain? Well played Platinum Games, you hit every mark I expected and several I didn’t even see coming.