In 2001, Camelot released a Game Boy Color version of Mario Tennis. It was a significant expansion on the Nintendo 64 game released the year before, offering up a full RPG around the great central tennis gameplay. Players levelled up, improving their skills and faced off against rivals they met along the way, and it was awesome. Cut to 2012, and Camelot have released a new handheld tennis game – one that, sadly, pales in comparison to the magic they once squeezed from Nintendo’s 8-bit handheld.

Mario Tennis Open features little in the way of RPG content. You can customise your Mii, if you want to use them, but your stats are inexplicably delivered through vague pie charts, and the game is brimming with far more lovable Nintendo characters. This is, basically, straight arcade tennis. It’s reeled in slightly from the Gamecube/Wii version, as there are no longer character specific power shots, bringing it more in line with the Nintendo 64 version in terms of on the court gameplay. 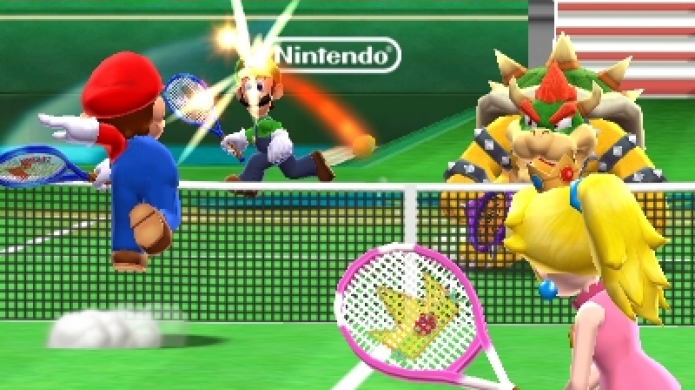 You can play in two ways – the normal, familiar way that all tennis videogames are played, which everyone will use, and a gyroscope mode that plays more like a shoddier Wii Sports. You can still move with the stick, but you won’t always need to as your character will generally move into place without prompting. The camera zooms in on your character’s back and tilting the console shifts the direction of your shot. It’s a silly system, one that you’ll want to abandon immediately, but it has been implemented in a way that assumes that players will return to it frequently.

You trigger gyroscope mode by holding the 3DS vertically; if you want to hold your 3DS this way without using gyroscope controls, you need to disable it from the start menu every single time you play. There’s no way of turning it off forever, and if you’re playing online multiplayer you have no choice but to leave it on. It’s a stupid system, as getting excited and moving while playing against a friend can ruin your whole game. This is a shame, since multiplayer is otherwise very enjoyable, albeit rather anaemic with its relative lack of options.

The tennis itself isn’t bad. It’s fairly standard arcade fare, with the added flair of a cool ‘power shot’ system. On some returns a section of the court will light up a certain colour, and charging up the relevant move in this spot activates a more powerful shot, one that is generally fairly difficult to return. This would be great if it weren’t for the fact that the X button automatically charges up whichever shot the circle wants you to make, removing the frantic fun of trying to work out which shot you need to use. Of course you can try to be strategic (which usually boils down to using a drop or lob shot that your opponent isn’t expecting), but if you’re playing against an AI opponent brute force is usually enough to get you through. 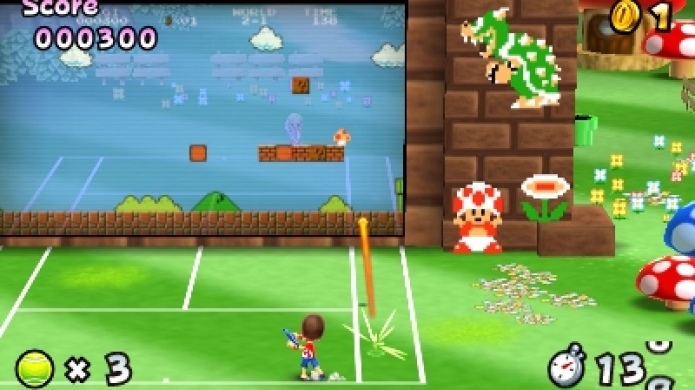 The single player experience is a bit bare. There are sixteen cups (eight in singles, eight in doubles), but there’s not a lot of gameplay variation between them, just ramping difficulty. The final four ‘Star’ cups for both singles and doubles can only be played with characters who have won the fourth cup, which is a dumb, lazy way of extending the game. There are four mini-games as well, but they’re not going to draw you in past a few quick goes.

At the heart of Mario Tennis Open, there’s a fun core tennis experience. It isn’t on par with the likes of Top Spin 4, but there was potential here for another great Mario sports game if the strengths of the shot system had been nurtured. Instead we’ve ended up with a tennis game that seems unusually keen to hide its potential away behind superfluous control options and silly concessions. It’s your best bet if you want a tennis game on the 3DS right now (better than Sports Island anyway), but not a patch on what you can find elsewhere.
Follow Us
Latest Reviews
More...
News Feed
Advertisement
Latest Threads
Log In
Create Account | Lost your password?