I’ll profess that I’ve always had an allure towards Magic the Gathering. I never crossed that line, but it was hard not to throw myself into that side of geek culture, but as many of you know, gaming is almost a full-time job in itself, and so it just never happened. This is why I got so excited two years back with Duels of the Planeswalkers 2012 after I learnt the series had arrived for Xbox Live and PSN -- I could play the game without fear of being laughed at by my competition and, presumably, learn to displace my opponent in a constructive and context-explained environment.

Truth is, that game was hard for newcomers. As was its 2013 sequel. Both games gave you a decent first-round tutorial that was winnable, but after that the AI just felt like it jumped up 1000 levels and if you weren’t confident with the game’s systems and rules, there’s a good chance you’d be smashed. 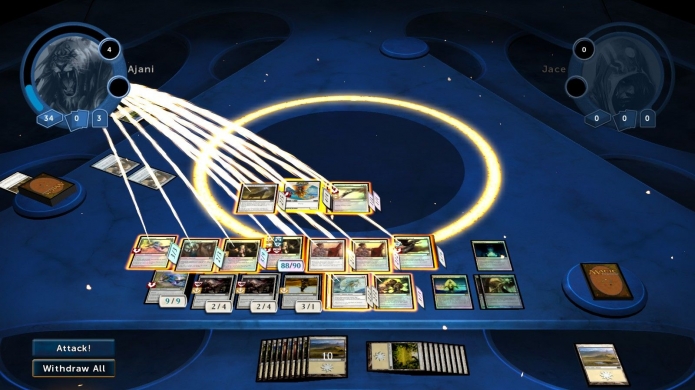 Duels 2014 thankfully changes this with a far more forgiving but broader tutorial system that acts as a prologue to one of the other new features of the game -- an actual story (there was a sense of narrative in the previous entries, but not to this extent). This works on a few levels, because the game’s tangent challenges in the tutorial mode feel more fleshed out, like you can figure out how you got to this position to learn just how to utilise Sorcery properly, or what it means to have a card with Reach to take out an opponents Flying Creature. For the hardcore out there, this might sound bottom line, but believe me, this card game is actually pretty intimidating.

The full single-player campaign throws some 25 different opponents at you, each with different play-styles and strategies, and you really feel a sense of understanding and progression with the game’s flowstyle as you take down each new and more challenging enemy. There’s also a separate Sealed Play campaign with its own deck building, 10 different puzzles and multiplayer (up to four). In terms of content, the game really delivers, and even has small cut-scenes to help flesh out the aforementioned story -- a first for the digital version of the game, and beyond the usual, Duels 2014 is also available on iOS and Android tablets.

Adding to the progression of understanding the game’s rules and systems, the Sealed Deck mode gives you a chance to really experiment with, and learn, what cards and decks work best for you and your strategies (or those at least in the making). You’ll be able to open up a handful of booster packs to flesh out your deck, and these are then graded by the game to give you an indication of whether you’re building correctly. Your other option is to just let the computer do it for you, but where’s the fun in that?

The game’s presentation has lifted over the past few years, but it’s still quite slow to move through (not always a bad thing for newcomers), and a bit more animation and liveliness wouldn’t go astray (something to the level of Blizzard’s forthcoming Hearthstone could really go a long way to livening up the game, but these gripes are merely cosmetic. The only other thing on my wishlist here is the inclusion of a Local multiplayer option so the wife and I can fight for bragging rights in the house as to who’s the best magician. Beyond that, Magic the Gathering: Duels of the Planeswalkers 2014 is probably the best place for anyone to jump into Magic for the first time and is great value for money for its breadth of gameplay and content.