If you've seen any media for Lollipop Chainsaw you'd know that it features a lot of butts, well mostly that of a young cheerleader. After reviewing the game it can be said that there are actually a lot of buts. The game features a strong cast of characters but they fail to develop or be even remotely explored. The game features combo attacks that can be upgraded but you can finish the game with a healthy mix of jump and attack buttons. There are some great sequences of scripted button-pressing but it features no escalation in difficulty. Level bosses are awesomely conceived but too easily defeated. In essence, Lollipop Chainsaw is a lot of great ideas rolled into an enjoyable package but lacks the attention to detail that knocks it out of the park.

In what instantly brings to mind images of Buffy, you play as Juliet, a young cheerleader with a secret slaying skill, although rather than vampires, it's zombies. Actually the zombie killing thing is a family affair with your rock ‘n’ roll dad and two sisters. And of course Buffy wasn’t actually a cheerleader, having only made first alternate in episode three of the first season, then calling it quits after her friend’s mum started a whole voodoo thing on the squad… but anyway. 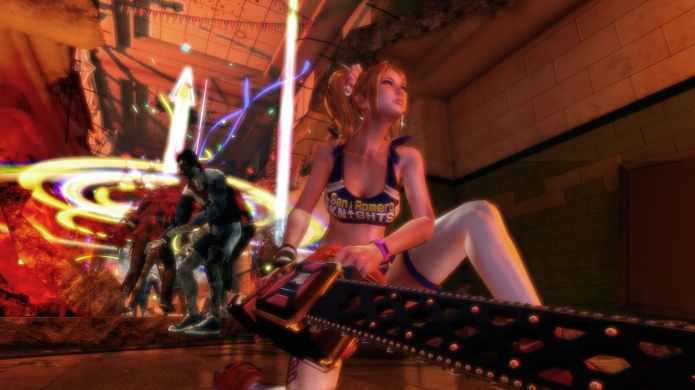 The brainchild of Suda 51, you can see his handiwork coming through in a number of ways. One is the instant feeling that the third-person styling is taken from Shadows of the Damned and the other the esoteric inclusions of alternate gameplay modes -- a welcome break from the overall zombie slaughter. From loading screens that flash back to the 16-bit side-scrolling era to Pac-Man-style mini games, Suda 51 brings a fun departure from the zombie horror theme, a sort of frantic Left 4 Dead/ Dead Rising feel but light-hearted, as though Bruce Campbell dropped in for a cameo.

A Bruce Campbell cameo would perhaps explain the chainsaw, Juliet’s zombie-slaying weapon of choice. The chainsaw is essentially the only weapon available, excluding a small upgrade during the game. Using it in combination with your pom-pom stun attack you can slice and dice your way through zombies, collecting coins for every kill to buy various upgrades and new attacks. Performing sparkle attacks by killing multiple zombies at once will give you platinum coins for splurging on bonus music and outfits.

The combat system works through various combinations of the four buttons, a fine system should you be looking to score yourself an A-plus for clearing the level, but functionally, liberal helpings of dodge sprinkled with standard attacks work fine for most situations. More interesting is the cast of characters, Juliet’s two sisters, her dad and her boyfriend. It’s a shame then that overall there is little in the way of actual development. Sure throw in some funny quips and all is well, but Lollipop Chainsaw fails to advance beyond a quirky zombie game because it lacks the substance of any real character. In some ways it’s a fun but easily forgotten game, much like the impending zombie apocalypse, which seems understated for all the destruction caused.

One aspect not easily forgotten is the boss battles. If you’re tired of unimaginative level bosses head this way because Lollipop Chainsaw brings you a fantastic selection of crazy zombie bosses. Most are heavily rock ‘n’ roll influenced and to use but one example -- I have never had a zombie shout “cocksucker”, have the letters appear as big blocks in front of him, then shoot across the screen to attack me. Awesome. The rest, particularly the penultimate and final bosses, can be left to your own discovery.

It’s almost a shame, having outdone themselves on the boss design that there is such small variety throughout the levels, which themselves are rather A to B affairs. With some small exceptions: Most of the level design is repetitive, a simple advancing along a linear path slaying group after group of similarly dressed, uninspired zombie chainsaw fodder. The biggest shame perhaps is that Lollipop Chainsaw doesn’t hit its stride until it’s too late, finally breaking from the earlier mold to give you things that are fresh and exciting -- but even then there is not enough of it.

With all the ingredients of a left-of-field zombie masterpiece Lollipop Chainsaw entertains but fails to live up to the expectations you have when Joan Jett starts blaring at the menu screen. It’s a game that Maxwell Smart would say “missed it by that much”. Liberal helpings of humour and zombie gore are great but the repetitive level structure and not-so-intricate fighting system leave you wanting more. The online component allows you to compete in levels you have completed, but unless you enjoy mastering the fighting system, it won’t hold much appeal.

A whirlwind of fun for sure, but too many opportunities are missed. At least the cathartic nature of zombie slaughtering does help you push through to unveil the end boss, which in a definite way is its own reward, along with the post credit ending, which you should stick around for.
Latest Comments
Link