In more ways than one, Halo 4 is a love story. It’s a beautifully detailed love letter from 343 Industries—a collection of massive Halo fans and Bungie alumni—to Halo fans. Then there’s the plot that, without going into too much detail, explores a very personal story of the two core characters of the Halo universe: the augmented super-soldier Master Chief and the AI construct Cortana. The twists and turns of the narrative are sure to attract the love of certain fans—such as myself—and potentially garner the unsatisfied nerd rage of others; particularly taking into account the rather ballsy ending.

The narrative isn’t entirely accessible to newcomers or those with a casual interest in Halo, but that doesn’t stop the storyline from being an engaging union of the fascinating sci-fi mythos of the Halo universe and some deeply rewarding human drama. At the end of the day, though, it’s a brilliant start to a new Halo trilogy that respects what has come before but, ultimately, carves its own path in many ways.

Story-wise, the plot kicks off some four years after the end of Halo 3. Master Chief is still on ice waiting for the next time the universe needs him, while Cortana has gotten a lot hotter and seemingly curvier. Crass comments aside, her redesign is a theme that permeates through Halo 4 and also includes a badass redesign of Master Chief’s armour, a familiar enemy force and any familiar weapon/vehicle you may encounter before the credits roll. In fact, Halo 4 is the prettiest Halo to date, and while this means that some of the open areas have been scaled back somewhat, it’s often stunning to watch and shows that the Xbox 360 still packs visual oomph. 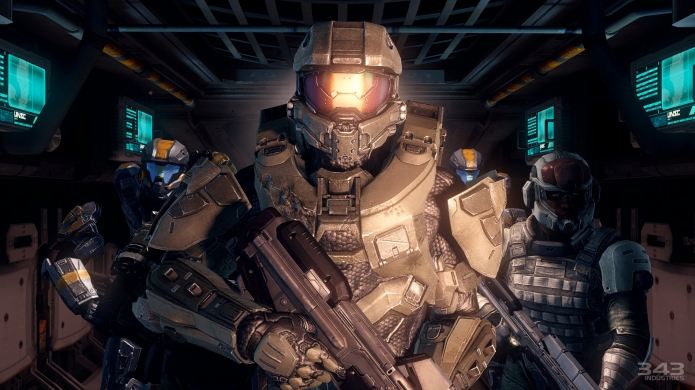 Cortana wakes up Chief as a proximity alarm sounds and the Forward Unto Dawn—that same ship that he was stranded in at the end of Halo 3—is being scanned by what appears to be a Forerunner planet called Requiem. Old foes the Covenant turn up for reasons that aren’t fully explored (perfect fodder for subsequent Halo sequels, I suppose), and they’re just as bastardly as ever. Hell, they’re even more so. As a seasoned Halo aficionado, I expected to piss the game in on Normal, but was pleasantly surprised to find that my cocky tactics were met by consistently clever AI foes that work together more than ever before. It’s just a shame that the old Halo tradition of dodgy friendly AI persists in Halo 4. Thankfully, the new opposing faction is up to task, but more on them later.

The opening fight on-board Forward Unto Dawn is a great reintroduction to Halo familiarity, and the subtle control changes that seem to permeate most iterations. Instead of crouch, clicking in the left stick now controls sprint: a permanent function that brings Master Chief up to speed with the rest of the gaming world. Not only does this mean that you can make use of returning Armor [sic] Lock capabilities—including new ones such as a mobile shield or a remote auto-turret—it also changes the combat. No longer do you feel vulnerable when caught out in the open with shields and metal-pants down; instead, you can leg it to the nearest cover. Sprinting became a big part of the hit-and-run combat tactics I often had to employ on large groups of aggressive enemies.

In fact, combat is made all the more immersive by the complete overhaul of the familiar Halo soundscape. This is, unfortunately, a noticeable detractor when it comes to the lack of a central orchestral theme for Halo 4—and yes, this means that the monk-chanting electric-guitar-rocking old Halo theme is out the door—even if there are some experimental moments and standout evocative tracks towards the end.

Where the aural overhaul doesn’t suffer, though, is in the updated weapon sounds. The shotgun roars, the Magnum pistol (which very much still has a zoom functionality) sounds like a mini-sniper rifle in a way that makes you wonder why it never sounded this way before, and all of the human weapons now sound as though they have believable stopping power.

To highlight the new sound design and tighter gunplay, the ending of the opening section involved a satisfying shootout in zero-G with an epic backdrop of an armada-consuming Forerunner planet. The muffled sounds of space combat were drowned out by the sheer frantic awesomeness of constantly switching between Covenant weapons that floated by, dropped by enemies that had been sent forward unto death.

This is a necessary tactic that continues throughout the game and highlights the versatile nature of Master Chief’s combat skillset. Y’see, while there are guns a-plenty, you’re guaranteed to run out of ammunition for your favourite weapons long before you’ll find ammo, which quickly makes you lose allegiance to human weapons and pick up whatever’s lying around in order to stay alive. Grenades have been clipped to three varieties, and you can only carry two of each type.

Fans will be familiar with human frag grenades and Covenant plasma grens, but the new Promethean variety is something else entirely. It has an initial shock blast that deals damage, but it also emits a short-range bubble that catches anything in its path; when it finally explodes, it disintegrates anything unlucky enough to be caught in the blast. The Prometheans are the new bad guys of Halo 4, and I hope to see more of them as they’re far tougher than the horde mentality of the Flood: a faction that’s thankfully absent this time around. On top of this, the new big baddie is much more intimidating than The Little Shop of Horrors approach to the leader of the Flood, Gravemind. He has abilities and a plan that make him a genuine threat.

Then there’s his army of Prometheans. They come in a few different flavours, and they’re all pains in the arse. They fight differently to the Covenant; hell, they fight differently between enemy types. Crawlers are Hyena-like bastards that can run on walls and ceilings; they’re deadly up close and can shoot from afar. Get too close to them and they’ll scatter or distract you while others flank. As if that’s not bad enough, the standard Promethean grunts can spawn overwatch devices called Watchers that can attack you, fling back grenades, project shields for their friendly units and revive fallen comrades. To make it even trickier, they retreat sideways when taking too much fire, making them much harder to hit. On top of all this, the Promethean Knight is deadly from afar and can even perform a teleport retreat or attack that dishes out brutal melee damage if you let them get too close. 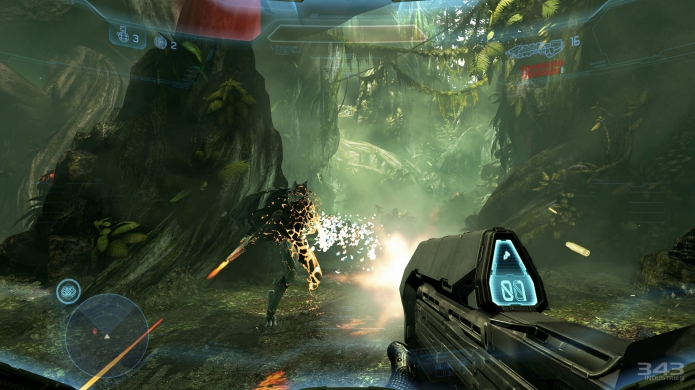 The Promethean arsenal is something else entirely. Sure, most of it comprises logical replacements for standard weapon archetypes—shotguns, rocket launchers, machine guns, etc.—but the weapon design is so fascinating you’ll be distracted (for at least) the first time you collect a weapon or reload. Promethean weapons form Transformer-style in front of your eyes and, when you reload, the various pieces of the weapon levitates to allow access to the breech. This attention to detail is just one of the many examples of the finesse that’s evident across almost every surface of Halo 4.

Even though I died a lot in the campaign, it never hit a point where I wanted to throw my controller. Every death was justifiable and forced me to adjust my tactics. Thankfully, the forgiving checkpoint system had a lot to do with my lack of frustration, and constantly kept me engrossed through my eight - 10-hour play-through.

Overwhelmingly satisfied with the campaign, I soon discovered that this was only the beginning of what Halo 4 has on offer. There’s competitive multiplayer across nine modes and 13 maps, which is an absolute blast. Most importantly, the healthy map roster boasts tight design and doesn’t represent recycled levels from the single-player campaign. Thanks to the included sprint ability, it also vastly changes the pace at which the game is played, creating more opportunities for charge-down melee kills or closing the distance to effectively use short-range weapons. Couple this with the subtle differences between loadouts, and combat still has that definitive Halo feel yet plays like an entirely new beast.

Matchmaking is a cinch, and even though I was only able to test multiplayer against international opponents at strange hours, the game was still very much playable with higher pings. There was also a surprising amount of intuitive teamwork on both sides taking place during my rounds, which deterred lone-wolf tactics and encouraged strong team play; a facet that’s usually absent from public matches. The biggest detractor of multiplayer is that it requires an 8GB installation to your Xbox 360’s hard drive. Ouch. Thankfully, load times off the disc for single-player are fast enough to not necessitate an installation. 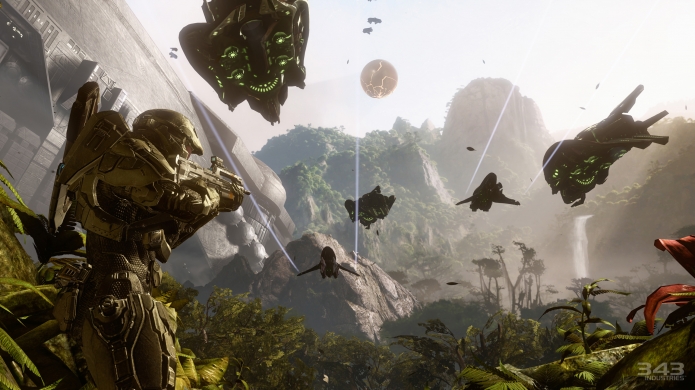 One of Halo 4’s shining stars, though, is the inclusion of Spartan Ops: a series of piecemeal missions that can be played solo, in two-player split-screen, or cooperatively online with up to three other players. Each season is introduced by a classy cinematic trailer providing narrative motivation, and divided up into 50 episodes, released in blocks of five over a 10-week period. Best of all, the first season is free of charge.

On your lonesome, these 10-20-minute missions are tougher than the campaign and really make you fight to survive. To make it even tougher, if you die during a mission, the weapons you drop disappear, which really makes you think twice about picking up that rocket launcher when surrounded by waves of enemies. While the levels I experienced were pulled from the single-player missions, they were spiced up with a hell of a lot of enemies and various win conditions. The more you play them, the more experience you earn to unlock different presets, which you can customise to your tastes by spending the Spartan Points (SP) that you earn along the way.

At the end of the day, Halo 4 stands as a particularly polished piece of fan fiction that not only deserves to be released, it carves its own way in an established universe, carefully paying homage to the tropes of what has come before, while boldly establishing its own mythology and gameplay lore.
Latest Comments
No comments currently exist. Be the first to comment!
Commenting has been locked for this item.
Follow Us
Latest Reviews
More...
News Feed
Advertisement
Latest Threads
Log In
Create Account | Lost your password?