There comes a point when you begin adding bits and pieces from various titles, specific open-world elements that have worked well enough in other games, mechanics from genres more conducive to the idea of leveling-up a character, an aesthetic that implies gritty realism, and things start to look a little muddy. And often require a bit of explanation, or comparison to like-for-like examples to make sense. Ghost Recon Wildlands from Ubisoft Paris is a little bit Far Cry, a little bit Just Cause, a dash of Grand Theft Auto, a sprinkling of The Division, and every bit a Ubisoft Open World Game.

The setting is a fictionalised version of Bolivia, a huge open world landscape where drug cartels have taken over the country. And it’s up to an elite group of soldiers, called Ghosts, to infiltrate and dismantle every facet of the operation. In the end though it’s this part of the game that is probably the weakest of all the elements it presents the player, offering up little nuance outside of American Soldiers being the good guys and everyone else being bad, corrupt, of simply innocent and ill-equipped to make a difference. You could even go so far as to label it offensive, if it weren’t so forgettable in execution.

Like the equally bland narrative seen in The Division, which was released about this time next year, Ghost Recon Wildlands shines brightest when played with others and exploring each evocative location in the game. And it’s here where the go anywhere, take any vehicle you want, and complete any mission you want structure of the game works best. Playing solo, the world is simply too big, and the missions too repetitive to make good use of free-form and experimental nature of playing in an open world co-operatively. It’s not terrible by any stretch, and several key features of the game that are Ghost Recon staples like being able to give your squad commands and use them in such a way as to breach a facility both stealthily and in style are only present when played this way. As are certain skill upgrades.

But after a few hours Ghost Recon Wildlands is at its most fun when you hop into a chopper, someone else a vehicle, approach a site from different angles and then talk about each move or kill. Whilst also using drones as explosive or EMP devices, reacting to a friend being spotted by taking out a sniper, or, simply being the last one alive and leaving your squad behind as you steal a plane. It’s here where the repetitive nature of the mission design isn’t so much a problem as it is part of a huge open world where you and a group of people can tackle in any order you see fit. Also, it’s here where the sometimes-janky vehicle physics are more fun than annoying, and taking a scenic shortcut only to get a car jammed in between two rocks is funny.

You get the sense that Ghost Recon Wildlands was meant to be played in co-op, as something as common (in this sort of experience) as making a quick getaway, when played solo, feels weird. In the sense that it takes forever for the AI to make their way to your vehicle, if they even bother, so instead you simply drive off and your AI squad is then magically transported into the passenger positions. Again, weird in that this will happen countless times if you choose to play the game this way.

In terms of shooting, Ghost Recon Wildlands is a third-person affair. But one that strangely opts for a very old-school approach where realism trumps the arcade-like fun implied by the rest of the game.

That means stuff like projectiles being able to penetrate material depending on the weapon you chose, and long range shots even factoring in a bit of bullet drop. Cover-mechanics though are strangely absent for the most part, and the fact that you can be downed from quite a distance away with only a few shots from a SMG means that stealth is the way to go. In addition to being a tad cheap.

So really, how each encounter for the most part plays out because of this is somewhat similar. Send up a drone, mark your targets, and then try and get into the best sniper position to take them out silently. Or, get in close with a suppressed weapon and take enemies out in sequence without being seen.

Again, playing solo is fine, but it’s easy to see how this all works a lot better in co-op.

The real stars of the show though, are the Bolivian setting and the variety of objectives and individual locations found within each region. Infiltrate a mountainside dig site, a cocoa farm, steal a plane, hijack an armoured convoy, take out a boat to silently infiltrate a drug barge, each mission type and location feels different enough to provide the variety needed in this type of open world experience. Coming from Ubisoft that’s expected, and in a lot of ways the placement of story missions, side missions, and various collectibles, has a sense of familiarity to it. And repetition due to the sheer size of it all. But like with The Division’s Manhattan setting, the Bolivian backdrop to Ghost Recon Wildlands is a visually and culturally rich place to spend several hours in. To a point, because after a few dozen hours things start to look and feel the same. 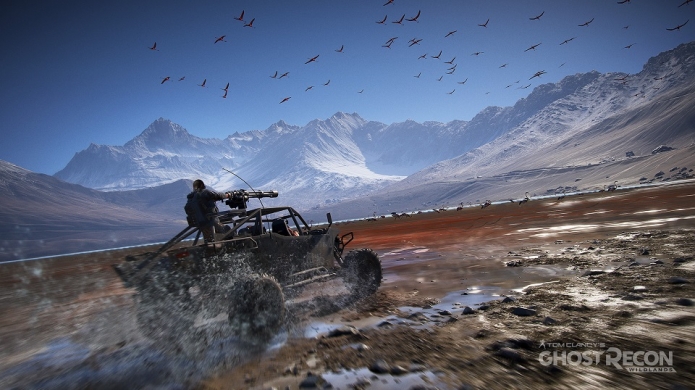 That being said, the weather effects and day-night system are exceptional, and add additional layers of variety to missions where you’re basically doing the same thing over and over. Infiltrating a compound at night during a thunderstorm is quite different to doing the very same thing on a bright and sunny morning. And it’s not all jungle too, with a variety of landscapes ranging from forest to desert to snowy mountains and even tropical island resorts. It’s impressive for a game touting the largest open-world environment ever built for this type of game, but in execution it means that before long the gameplay loop will begin to show its seams.

Which is a shame because you get the sense that if it wasn’t shooting for Tom Clancy-like realism, and instead embraced the wildness of both its setting and title, then there would be more to it. Having hundreds of different weapon mods and customisation options are great if you’re a gun nut, but when everyone dies after a few hits it starts to lose its appeal. Instead it’s the stuff where strapping a vehicle or chopper with C4 and letting it glide into enemy territory before setting it off should have been encouraged more in the overall design. In the end, Ghost Recon Wildlands suffers because it plays things a little too safe and fails to make proper use of the gorgeous fictional world of Bolivia in a way that offers more than solid stealth shooting, fun co-op, and small bursts of player-created fun.
Follow Us
Latest Reviews
More...
News Feed
Advertisement
Latest Threads
Log In
Create Account | Lost your password?