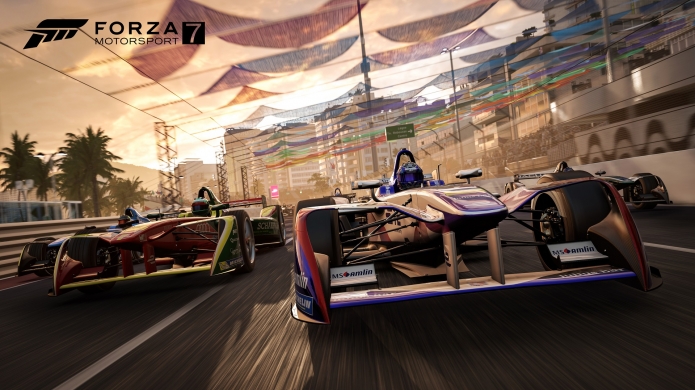 Oh Forza 7,
Shall I compare thee to a summer's day,
Thy menus more functional than template,
Rough winds do blow autumn leaves across
Thy undulating and curvaceous Maple Valley,
As though 'twere a maiden's breast.
Summer's lease hath lent a radiance and
All is a shimmer as drifts of sand pile upon thy Dubai circuit,
Swept in from yonder desert.


Flowery prose and my butchery of Shakespeare aside, Forza 7 is the most beautifully detailed and visually stunning games to ever appear on my television screen. The cars are not only comprehensively rendered in great detail the locations too are an opulent delight. Dirt and road debris realistically accumulates on your windscreen and vehicle as races progress. Wind and rain and drifting sands not only look great but also enhance the soundscape which, when coupled with all the unique engine and exhaust notes, creates an aural extravagance unlike any other. Dynamic weather and day/night cycles produce profound gameplay changes via reduced visibility and track adhesion. Precise control and tactile feedback combine with all the visual and auditory indulgence noted above to present a racing game par excellence.

Enough fawning for a second, I’ll get back to that soon, let’s talk about the cars in Forza 7. Of which there are a lot. And within the ludicrous amount of cars on offer it's great to see some Aussie favourites like the Torana , Falcon GTHO III, and the Group A VK Commodore. As well as the mighty V8 Supercars from both Ford and Holden. There's a noticeable lack of Toyota production models, but the massive number of Porsches, Lamborghinis, and Ferraris help ameliorate the loss. A great number of cars can be won or bought (not all) and any addition to your garage increases your Car Collection score. More on this in a bit too. 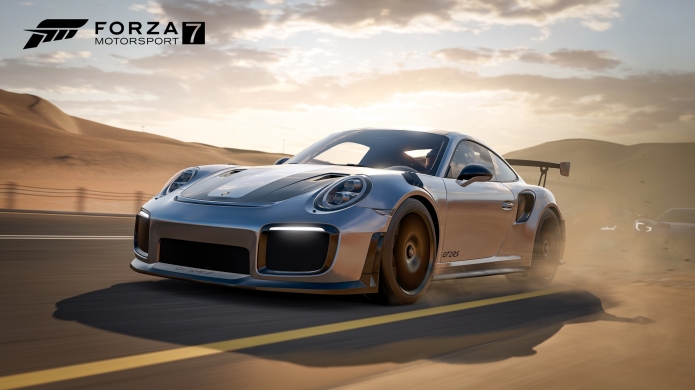 The core of Forza 7 is neatly contained within the Forza Driver's Cup, the best version of the franchise’s single-player career mode to date. Central to the entire game the Cup incorporates all the Championship and Showcase events where XP is earned and cars awarded. And it begins in true Forza style with three mandatory races. For the first I was deposited into a Porsche and after the rolling start, became baffled by the car's handling and performance. The GT2 RS was sluggish and actively fighting me. Acceleration was spotty, the steering erratic. The car kept braking itself and I found myself questioning if it has been too long since I played Forza. This isn't the game I remember. Where's the silky handling, the smooth performance? Then it hit me. Driving assists.

Sure enough everything that could be switched on to help a new racer was dialled up to full. Once steering assist was back on simulation, traction control, stability, and ABS disabled, the Porsche responded beautifully and I resumed racing. One corner later a second realisation dawned on me. Forza 7 looks stunning. Breath catching-ly, ball tightening-ly, gorgeous. Race forgotten the Porsche, absent control, drifted across the long sweeping curves of Dubai's road circuit. As for me? I simply sat there, slack-jawed and starry-eyed at the desert scenery. Moments later a subtle smack of the Armco brought me back to my senses. And with a tap of the rewind button, I was focused and back in the race.

The second race was in a truck, yes a truck, and I cleaned house. The third and final mandatory race was another fight to stay focused. Albeit this time for a different reason - the always impressive and better than ever Forza weather effects. I was in a beast of a race-spec GT-R and the rain was pouring down, snaking up the windscreen before being whipped away. And as I raced around Suzuka circuit chasing glimmering tail-lights in the dead of night it was hard to fathom that there was still a 4K update coming to take advantage of the new Xbox One X.

Scattered throughout the Driver's Cup Championships are Showcase events. In Forza 7 these races aren't the gaudy spectacles of previous titles. See, Forza Horizon 3. They are firmly in the world of the real. Okay, so it might not be every day you go Top Gear bowling in a limo or hoon around Long Beach against Ken Block in his Fiesta. But, it's more believable than jumping multi-ton trophy trucks over powerboats and racing Lambos against jump jets through Surfers. Even so, just like in previous outings, Showcases are fun and memorable. Plus, you get to keep the car used in the event which is always nice. And now every time I see that canary yellow Corvette C7.R in my garage, my right hand cramps in sympathetic memory of the hour-long endurance race at Spa I won to earn it.

New to Forza 7 is the homosapianisation of all vehicles competing in the Championships. Wait, that's not right. Homogenisation. No, that's milk. Homologation is the term, which means vehicles are no longer restricted by performance index alone. All cars now fall into a specific division such as Exotic GT and Rally Heroes enforcing strict restrictions on what you can and cannot race. Gone are the days of stripping all the weight and slapping a twin turbo on your favourite car and winning every race. Sure you can still upgrade your mum's Civic in whatever manner you choose, but you'd have more hope finding a driveable Lada Niva or Daewoo Lanos than actually getting to race your lightweight high-toned beast in the Vintage Off-Roaders Championship. I can understand Turn 10's desire to promote equal and fair competition, but in doing so it’s sure to annoy some long-time fans of the series.

Another move causing a bit of controversy is the inclusion of loot boxes, dubbed prize crates. Some believe these are a cancer of the gaming world and every effort should be expended eradicating them from existence. To others they're harmless, providing inessential additions, typically in the form of cosmetic items. In Forza's case this equates to Driver Gear (serious and silly racing suits) Mod cards, and vehicles. As mentioned previously, not all cars in Forza's vast stable are purchasable. 'Exclusive' vehicles are obtainable only from prize crates, the Specialty Dealer, Forzathons, and by completing the Championships and Showcases. At the time of this review I have yet to complete all the requisite events to unlock these vehicles, Forzathon hasn't been launched, and I'm really hoping that any cars that can only be found inside prize crates are variants or Forza Editions of existing purchasable or winnable vehicles. It would be most unfortunate if a vehicle you’re after was only obtainable via random chance when opening prize crates. 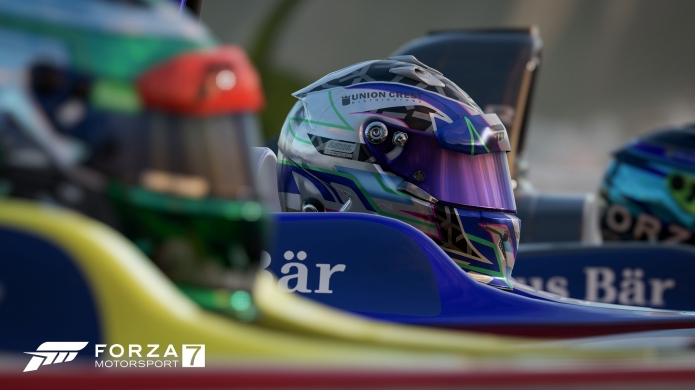 Now that racing games are no longer immune to RPG-style random loot in prize crates, Forza 7 has gone the extra mile and colour-coded every collectible in the game according to rarity. Common items are green, rares purple, legendaries orange. And before you ask, vehicles aren't exempt. Car Collection is a where the 700 or so vehicles are displayed and divided into five coloured tiers ranging from, you guessed it, common to legendary. Each car has a rarity index assigned, from 50 for common cars to over 2000 for legendaries. Owning a car adds this number to your overall collection score, serving to increase the quality of the milestone rewards you receive when levelling up your driver with XP gained from racing. Yeah it baffles me a little too. All this incentivised levelling and colored loot rewards has me questioning if I'm playing an RPG, a racing game, or some mutant hybrid.

Whatever the case may be, I still love it.

Forza 7, as with previous entries, recycles a great number of cars and tracks. So you might start wondering if this is the game for you. Fear not, race fans. Loot boxes and Mod cards can be happily ignored. The enforced restrictions embraced for equality in racing. You will see your Driver Gear on display as your Drivatar poses before and after every race so pick something unobtrusive to wear.

There is a ridiculous amount of cars to collect in Forza 7, including a host of never before seen vehicles. Each of which can be hurled around the truly impressive variety of tracks brought to life by stunning weather and time of day lighting effects. Plus, even if you’ve seen some of these cars and tracks before they’ve never looked or felt this good. Racing is exciting in Forza 7 and accessible at any skill level. If you were to strip away the visuals and leave behind the core mechanics of racing hundreds of cars across numerous tracks, Forza 7 is still one of the most well rounded and solid racers ever created.

But then again when you gaze up at a leaden sky as the first few drops of rain spot the windscreen inducing trepidation and fears become reality, Forza 7 becomes something so much more. As the skies open and rain begins to pour down, the wipers spring to life. But it's up to you to adjust for the worsening conditions. Increase your braking zones. Be mindful of the reduced traction. The sort of depth that takes you by surprise and keeps you engaged, Forza 7 is a racer designed and built for maximum enjoyment.