Call to action and call to adventure are two very big parts of engrossing game-design, if handled right. The Far Cry series has always kind of had no problem with this; serving up desperate scenarios that fit the ‘fish-out-of-water’ player baseline utilised to set the player up, in a world they shouldn’t otherwise be in.

In Far Cry 5, this ‘fish-out-of-water’ setup is as important as ever, specifically in the “getting it right” department, because you play a US Marshal closing in on a religious cult that has deeply entrenched itself in and around the fictional town of Hope County, Montana. The fact you play as a lawman (or woman) makes the narrative setup here risky. If you’re on the side of the law, then shit shouldn’t hit any fans, and you ought to be able to use your law powers to immediately save the day. Only, obviously, this doesn’t happen and while shit figuratively hits a proverbial fan, real bodies hit a literal helicopter blade and your escape setup and mechanism is set. And it’s fucking brilliant. 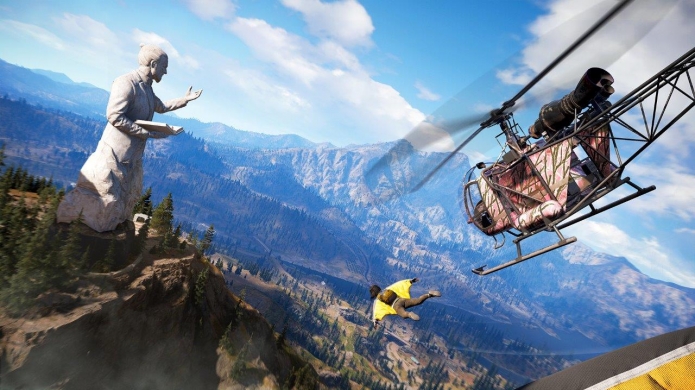 You’ll quickly wonder, after making good your escape, why you can’t just go and call in the National Guard, or the Army, or any other form of law enforcement, but Ubisoft cleverly gates this. There’s no phone signal in Hope County, so your phone is useless (bringing us back to maps and such, and no more apps). Your US Marshal partners haven’t been killed, they’ve been captured and taken prisoner. And, as it turns out, there are innocents being dragged into the cult’s deadly grasp as well, so you know: duty, and all that. After a few hours, when you’re told by the Ryes that it’s okay if you lose a plane -- the same plane Nick Rye coveted oh-so-much in your mission to bring it back -- that they have a “hangar full of them”, you kind of come back to a bit of traditional Far Cry reality.

So, with that being said what you will get here is Far Cry. It’s a scary Far Cry for a number of reasons, and as I’ve explored in the build-up to this game’s release, not the least of which being that this Far Cry’s release timing is just a bit off in that life is imitating art in the real-world right now, it’s still a classic chaos simulator in the end. Vehicles will blow up when you least expect them to, skunks will come and spray you while you’re trying to be stealthy in the brush, and bears will just come the fuck out of nowhere. But that’s what we love about Far Cry; what we want from Far Cry. 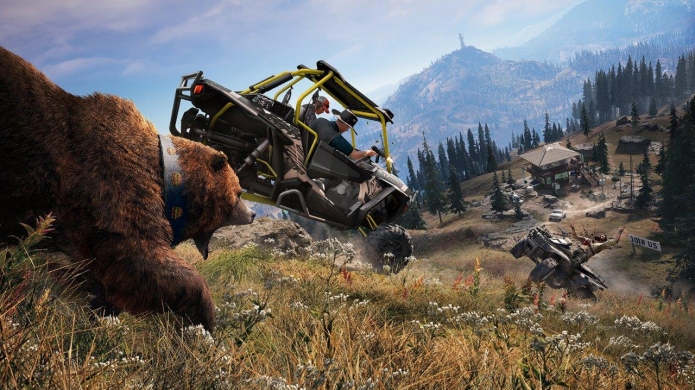 The changes here aren’t all that drastic either. Towers are gone. You’re not a voiced character anymore. You can be either gender. Support AI is back, only now as a bigger roster. And you can have your own dog, or bear. Honestly, it’s barebones, but how they’ve let the game play the player is the best part. I mentioned earlier that this is a chaos simulator, and that plays out moment to moment. Even if you’re trying to just trigger the next quest or side-mission, the game’s systems will come for you. But what this chaos does is push the player to look at the more uniform side of the game. Because Far Cry 5 is actually pretty difficult. So you’ll need to use that loot; use that money you keep finding. You’ll need to upgrade your weapons to reflect your playstyle and you’ll need to use those liberated towns and characters to your advantage.

And it’s honestly the only way Ubisoft Montreal could have handled their liberated gameplay experience. Tone sets up a lot of what this Far Cry is about; dark, realistic (at times), gritty, on-the-nose (at times); justfied -- this is first-person GTA done better than GTA because of its over-the-top nature. If you consider all of the big-bads and crazies in the Far Cry series before, and roll them all up into a single, tonal theme for a game, that’s what Far Cry 5 is. It’s silly. It’s fun. It’s brutal. It’s scary. It’s lost and found, both at once. And in many ways, because of all of this, it’s also America. 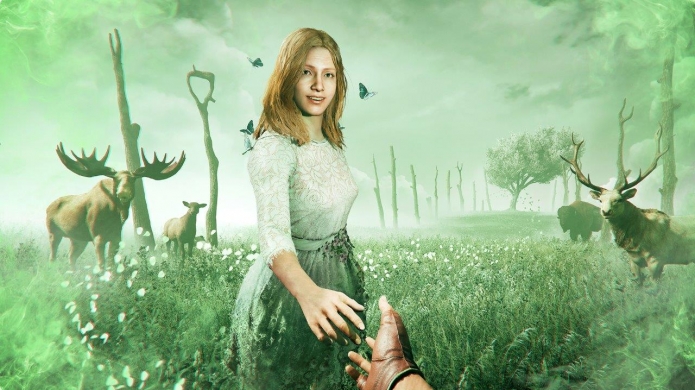 Structurally, Far Cry 5 differs from previous entries because it doesn’t hold your hand, but it also doesn’t preach a developer-driven progression at you. This is where the GTA reference comes back to the fore -- and this isn’t a slight against Rockstar’s series, it’s just that there’s a seriousness around those games the developer tends to lean on. And for the good of that series too. Here, however, ridiculousness is design key. Yeah, that HBO-level intro sets up a tone unlike most other intros in games, but it also serves a purpose to sell just how crazy this whole situation is. I mean, ham radio, landlines, the Internet, a fricking postcard -- almost anything could be used to get you out of this mess, and to kick Joseph Seed and his bad-eggs out of Dodge. But it kind of doesn’t matter, because there’s a bear named Cheeseburger, and you have to rescue him.

A lot has gone into the cultist research behind the game, and the real-world parallels it incidentally reflects, but when you get a few hours in, it simply rears its head as a liberated Far Cry game and that’s for the absolute best. The gunplay is still fantastic, the ecology is amazing and the less stringent gameplay structure is liberating, to maintain a theme. Distractions come in thick and fast here and the designers aren’t afraid to pull you out of seemingly pressing story quests to have you racing a quad bike, or fishing, or flying a plane through smoke circles in the sky. And that’s why Far Cry 5 succeeds so much. I spoke with Far Cry lead Dan Hay about their design maturity, where I specifically lent more towards the mature tone of the game, but he answered more around them just letting their figurative design hair out. Which is hilarious, because he’s bald. 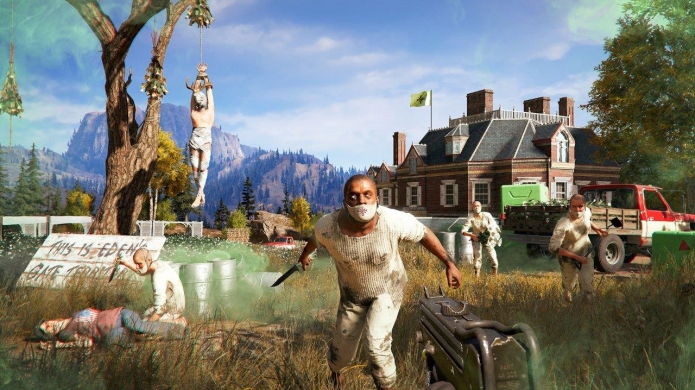 Co-op, multiplayer and a fully-fledged player-creator mode accompany the game and all will be utilised to their fullest. It's a stunning game, too. With an incredible soundtrack that really needs its own shout out here, and maybe only because we've been conditioned with the likes of Deadwood, Justified or even West World -- obvious points of inspiration for the design team, but it really goes a long way to helping sell the space we're playing in. However, in powerful parallel -- as is our review theme here -- it's also accompanied by sweet 80s and 90s action movie audio moments and cues. This is a game the studio had fun designing.

And so what we get in the end is a Far Cry that is both structured and full of open player-agency and emergent activity. It’s a game whose game-world is designed for you to love and adore, to become intimate and at one with; to be equally terrified of. This is videogames, after all, and that is at the fore of design here. Yeah, the Seeds are ‘bad seeds’, but that’s kind of the joke, right? Of course there are people out there capable of being this horrendous, but could we ever face them and have this much fun? I’d argue no, and it’s in that no that Ubisoft has delivered us a perfect YES.