As videogames mature and time goes on, titles from years gone by are bound to keep inspiring artists and designers. The indie scene is chock full of experiences where one can point to a genre’s roots or even a specific title from a different era as a potential source of inspiration. From pixelated side-scrollers to point-and-click adventures, inspiration breeds creativity.

Where it can get confusing, comes with distance and context. Measured as the time between the source and the ‘inspired-by’ release, a narrow enough window can result in something looking like a simple knock-off. The risk of which increases dramatically if nothing new or interesting is brought to the table. Or, it simply fails mechanically. 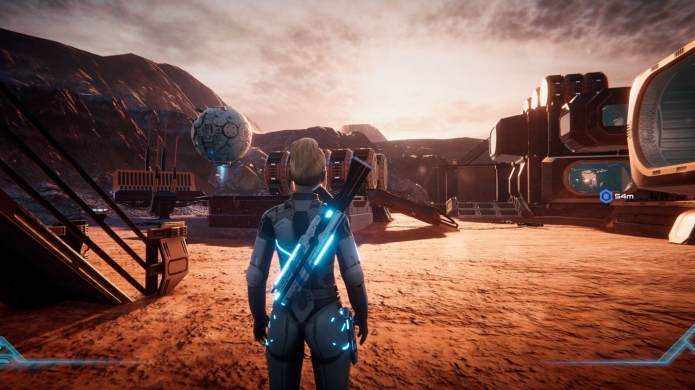 As a third-person sci-fi action-RPG, Everreach draws most of its design and influence from BioWare’s Mass Effect. From strange alien artefacts and human colonies on distant planets to third-person shooting where you can cast defensive shields and dash forward with superhuman speed. Branching dialogue choices and the promise of a cinematic story with multiple endings. Plus, vehicles. Because Mass Effect had the Mako.

"As a third-person sci-fi action-RPG, Everreach draws most of its design and influence from BioWare’s Mass Effect.”


Similarities to Mass Effect aside, Everreach leaves a positive first-impression. From the synth-heavy score that is somehow both engaging and generic, to the pleasantly detailed visuals for what is essentially a game created by a handful of people. There’s a lack of animation and cohesion to bring the on-screen elements together, but there’s a vibrancy to the setting of Eden that is inviting. It’s hard not to be impressed by the sheer ambition of a Mass Effect-style experience created by a small team. 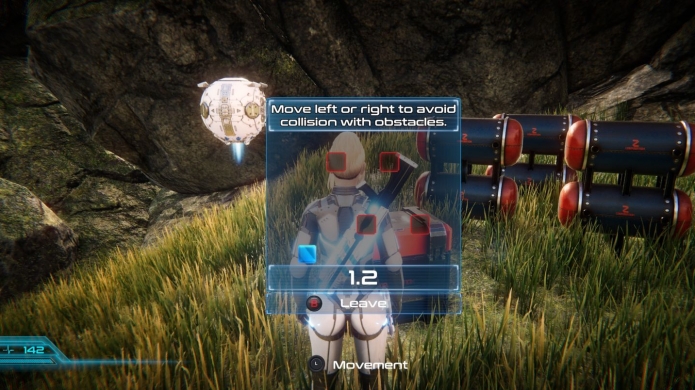 A feeling that quickly dissipates once you start playing.

For all its faults, and there are many to be sure, one need only look at the ‘on-vehicle’ sections in Everrreach: Project Eden to get a measure of its quality. Remember how the Mako in the first Mass Effect was a floaty mess that obeyed its own set of weird physical rules? Well, the hoverbike that protagonist Nora Harwood rides here – is worse. Floaty sure, but even the slightest bump as you ride over a rock or the simple grazing of a tree at low speeds and it’s one scrape away from exploding. Like the Star Wars speeder-bike chase seen in Return of the Jedi, but each time you’re a Stormtrooper. And it plays out in slow-motion along linear corridor-like pathways.

The combat in Everreach is best described as clunky. A catch-all term that you’ve no doubt heard thrown about once or twice in the past, but in Everreach this means enemy AI has one mode - strafe back and forth in a small open area with the ability to down Nora in a couple of hits. Or glitch out. Throw in questionable weapon accuracy and aim sensitivity that even on its lowest setting forced us to lower our mouse’s DPI setting, and combat is barely tolerable. Played with a controller it gets worse. 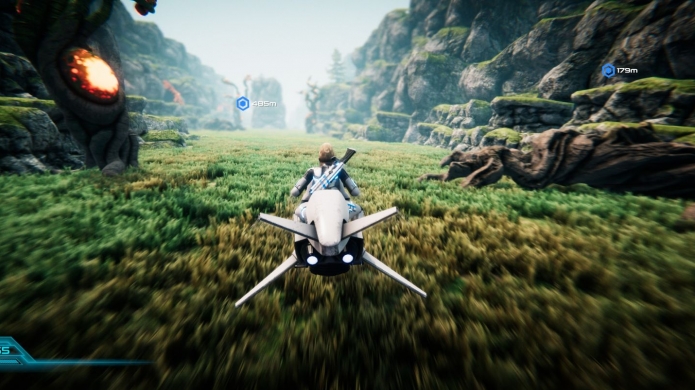 Oh, and that’s ‘best described’. Visually, the combat fares worse with Nora’s legs clipping through each other if you decide to crouch behind an object and move into a better firing position. Enemies also don’t react to being shot, so the only way you know projectiles are doing their thing is by watching to see if a health-bar lowers.

"Throw in questionable weapon accuracy and aim sensitivity that even on its lowest setting forced us to lower our mouse’s DPI setting, and combat is barely tolerable.”


Story-wise things don’t improve, with the StarCraft Ghost Nova-inspired Nora offering little in the way of definable characteristics. Instead, she rattles off the next thing in the dot point list of things to say in a sci-fi RPG that we’ve heard before in games with better dialogue. Outside of the surprisingly impressive environments the character models are bland and lifeless and above all – generic rip-offs of the art direction found in the original Mass Effect. Without detailed animation the dialogue opts for humour as its main go-to, but it’s about as funny as Genophage humour at an open-mic night on Tuchanka.

The big alien reveal at the end is somewhat interesting, though it arrives more as a relief that Everreach is a pretty short game. Far briefer than any of the Mass Effects. In fact, it can be completed in around 5 hours or so – which makes the detailed skill tree system a complete waste of time and effort as there’s no real way to create a proper build or even unlock more than a single ability until it’s too late.

It’s also worth highlighting one of the more inconsequential elements of Everreach: Project Eden because it speaks to the experience. And that is how it fails to understand the concept of the hacking mini-game. The contrived elements in games like Mass Effect that add some flair to the act of unlocking containers by creating puzzles that are meant to represent the inner working of locking mechanisms in some way. In Everreach, one of these involves dodging falling blocks for no good reason. Floaty imprecise controls, a lack of depth, random spikes in difficulty due to bad design, random frustration, a mini-game for the sake of a mini-game, and a protagonist with the all the charisma of a shiny blue block.
Latest Comments
No comments currently exist. Be the first to comment!
Commenting has been locked for this item.
Follow Us
Latest Reviews
More...
News Feed
Advertisement
Latest Threads
Log In
Create Account | Lost your password?