Forget Dishonored’s myriad gameplay systems that empower you to forge your own rebellious destiny. Forget its stunning level design and massive, open gameplay arenas that let you toy with the aforementioned like a kid in some kind of store. And forget the unbelievable art-direction littered about the dank, rustic city of Dunwall. Forget it all.

Because Dishonored’s true heart -- its true self -- is revealed in the not-so-subtle tales of Dunwall’s robbed-of-all hope denizens; its citizens whose dark days (and nights) are the very soul of what you become, be it mass murderer or righteous hero of the Empire.

No matter how you play the game, their soul-crushing stories of plague, fascist rule and death will never be forgotten, and it’s in this pace-as-you-please exposition that Dishonored truly shines, not because it’s an engrossing way to draw the player into the game, but because it’s absolute proof Arkane are backing the heck out of their new IP.

Most of this “backstory” is handed to you in the form of notes, diaries, books, songs, graffiti and more (or visually thanks to Dunwall’s corpse-riddled streets and alleys), but every so often you’ll also have the opportunity to interact -- on a gameplay level -- with this aspect of the active story, and it’s in these moments Arkane empower you to take note of change and of despair, and how at the centre of both extremes you exist as a tool, not at all unlike those given to you on an abilities spectrum within the game, for the greater good.

A lot of players couldn't care less about a game’s story -- I know many of our core readers aren’t usually too fussed about context, but it cannot go understated how much effort and passion has been poured into Dishonored’s game-world. There’s rich narrative, beyond that at-hand, here for the story-centric players out there, but amidst tales of whaling, witchcraft and revolt, Dishonored is still very much a videogame, and it delivers on that plane in absolute spades.

It’s probably easiest, from the outset, to give you the requisite comparisons for contextual purposes. In every review of this game you read, these will appear almost like a checklist, but it’s important to lay a foundation given this is new waters for everyone, which in itself is an important point I’ll touch on shortly. Thief, Deus Ex and BioShock - those three games could very easily sum up for you the types of situations and opportunities you’ll be faced with in Dishonored, and yet levelled by the aforementioned narrative construct, any components it harbours from those games is left to “homage” rather than “borrow”, because it’ll conjure familiarity for most, but on the whole everything is delivered in such a grounded way, it all becomes the property of the Dishonored universe.

That you’re attempting to find a missing heiress to a throne you once protected so dearly, while also clearing your tarnished name, is as important as how many Runes you collect in each level to gain access to new abilities to further your sandbox experience. Nothing in Dishonored feels tacked on, and I could ramble for hours about the RPG components of the game, if they felt RPG, but they don’t, instead they feel Dishonored. And that is where this game shines. As a new IP there are always uphill battles, proof of which lies in the fact that 90-plus-percent of the videogame releases this year are ‘sequels’ (half of which actually don’t carry on any specific franchise narrative, such as Far Cry 3), but the whole delivery across the gaming spectrum with Dishonored is polished beyond belief. The game paces itself to absolute perfection, giving you the choice very early on to decide how you’ll take on the game. 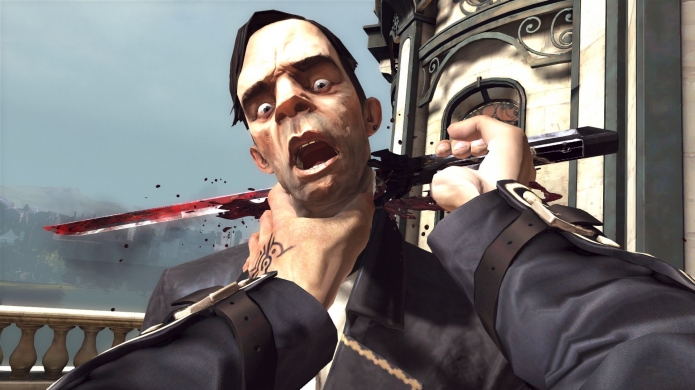 Where other titles of a similar nature handfeed you gameplay tools built to tackle level specifics, Dishonored simply gives you one, and then the ability (or know-how) to empower yourself with the others in any order you see fit. This “choice” alone could be used as a metaphor for the whole experience, but then I’d be doing a disservice to everything else on offer, and while I’m clearly glowing like a container of Whale Oil over the game, it’s also not without its faults.

For one, the predictable AI and their easily-observed routines are something I feel the team could have worked on a bit more. I’m also not a big fan of the menu system or HUD design. The font when reading any notes is also something that felt a bit lacking, and let down so much of the rest of the work put into bringing the game-world to life (the paintings and portraits throughout are absolutely breathtaking). Failing missions was also a hard-fail situation, which is an area that could have added to overall “choices” component of the game, and some of the bottlenecks and Checkpoints were equally frustrating. But not a single one of these minuses for me broke the experience.

It’s difficult to convey how the game works without spoiling some of the surprises the team have in-store, but rest assured that while in the lead up to release Arkane has been staunch on reminding you this is not an open-world game, its level-by-level mission structure is better described as sandbox-by-sandbox (the first proper “mission” can take more than three hours to get through), and the exploration value added to these massive arenas is driven not only by the heavily touted story component I mentioned, but also by loot (driven by crafting), the aforementioned Runes (and Bone Charms which are active buffs), side-quests and sub-missions, and the levels themselves.

It’s almost maddening, from an adoration of the narrative point-of-view, that you can go in and replay missions to your heart’s content upon their completion, like Dishonored were some old-school videogame, but it would also be a crime to let the heart poured into each mission for path variation and player-choice go unexplored and unexploited -- it’s honestly that good. 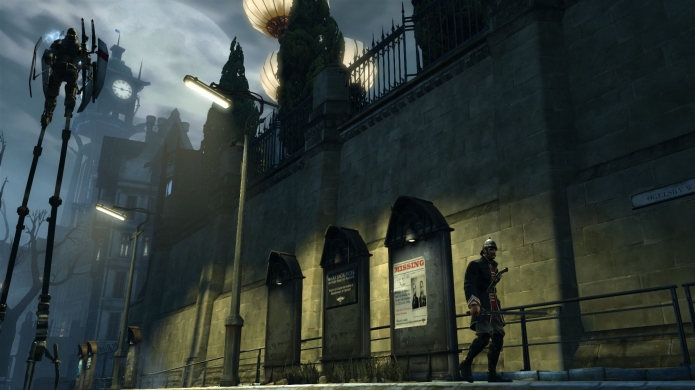 I’ve avoided spoiling the story for you as best I can, and even some of the gameplay set-pieces that are actually important to understanding the experience, because Dishonored is a game that needs to be experienced on an individual level. It’s a bold entry into the cluttered gaming world, and takes a chance on the idea that as art, games can draw you in to amazing and promising worlds full of adventure and potential. Like its homaged brothers mentioned earlier, it's a rare kind of game that waltzes into a field of debonaire company yet wows the room regardless. You may not know much of his past or even what his intentions are, but you’ll be damned if you don’t let him take you for a spin around the room. And at the end of your dance, he’ll leave you dizzy and giddy, wanting only for more.

One of this generation’s best efforts.
Latest Comments
Link