Budget titles bring with them a sense of lowered expectations, production values that won’t turn any heads, and content that should provide a finite experience as a sort of stop gap to the ‘next big thing’. Deadfall Adventures neatly follows this path but also tries to provide a story driven adventure that transcends its genre (the first-person shooter) by tying it to the title’s namesake – the traditional adventure game. This means puzzles to solve at regular intervals, exploration, and treasure to collect. A sure-fire recipe for both success and failure.

The literary character Allan Quatermain was a sort of proto Indiana Jones, in the sense that the supernatural mixed with archaeology and the man himself was known for a sarcastic quip or two. The novels featuring the character predate cinema, they first came about in the late 1800s and although Deadfall Adventures follows the exploits of one of Quatermain’s descendants set during World War II and features a mixture of the supernatural and archaeology, it can’t help but come across as a poor man’s Indiana Jones.

With a cast of characters featuring occult obsessed Nazis, a prudish female companion, amongst other hallmarks of the classic Indy films, Deadfall Adventures checks all the tight tick boxes but fails to grasp any of their meaning. Kind of like the Chuck Norris vehicle from 1986, Firewalker, where it tries to follows a similar template but somehow gets pretty much everything wrong.

Having a protagonist who almost exclusively speaks in sarcastic one liners outside of the narration is a sure fire way to create a rift between them and the player, something the majority of game developers have yet to learn over the course of decades. Of course this can be excused in cases where the set pieces and sequences are far more memorable than the narrative, which is par for the course in a lot of action-centric games - which Deadfall Adventures is only some of the time.

Instead, developers The Farm 51 opt for a more ambitious approach blending the fast-paced action of many modern shooters with the puzzle solving of classic adventure games tied around a globetrotting narrative. The end result isn’t anywhere near interesting or different as that may sound, with many of the puzzles feeling reminiscent of those featured in games like Tomb Raider and even The Legend of Zelda, but with clues spelling out most solutions completely. 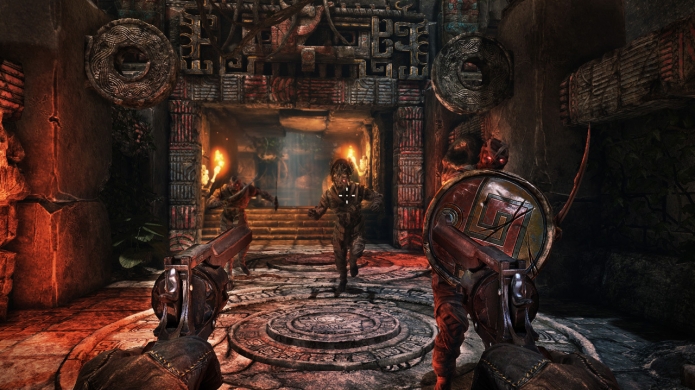 The exploration is also tied to the in-game compass which somehow magically points towards the numerous pieces of treasure to collect, in turn making this portion of the game no different to the numerous examples of ‘collect x of x’ we see masquerading as exploration in a linear game setting. The action is handled a lot better with a mixture of using a torch to burn mummified enemies in order to make them susceptible to bullets, which doesn’t make much sense when you think about it but works in the context of the game. Outside of that players can expect plenty of crowd pleasing Nazi infantry shooting and some communist Russians to dispatch for reasons that are better left unknown. Perhaps they were some extra character models the developer had lying around and decided to throw in.

But taken as a whole mix of styles doesn’t really work as they’re as undercooked as the story. Case in point, at many intervals you’ll find yourself having to solve a puzzle pushing levers and moving around symbols to open an ancient doorway that by all accounts has been closed for thousands of years, only to find that inside you’ll be ambushed by a group of Nazis. They exist purely to inject an action set piece where it clearly and logically does not fit. This sort of baffling design is not a new thing but as game narratives improve these dated examples can’t help but feel just that – dated.
Latest Comments
No comments currently exist. Be the first to comment!
Commenting has been locked for this item.
Follow Us
Latest Reviews
More...
News Feed
Advertisement
Latest Threads
Log In
Create Account | Lost your password?