By the time 1996 rolled around there was still a sense or feeling within the industry that a console platform or hardware maker needed a mascot. A character that could be associated with a specific bit of tech, be the star of their own game, and generally be tied to one platform. With the launch of the Nintendo 64 there was Super Mario 64 - which brought the Italian plumber and Nintendo mascot into the realm of 3D graphics. SEGA still had Sonic, sort of. At this point in time the blue hedgehog kind of ventured into the realm of self-parody.

With Sony and the CD-ROM powered PlayStation being the new kid on the block, as soon as audiences got a glimpse of Crash Bandicoot - the deal was already done. Crash was to PlayStation what Mario was to Nintendo 64, or any other Big N hardware venture. A fun, colourful character in an impressive jungle location. The star of his own adventure, and a character full of ‘90s attitude. In a cut-rate Looney Tunes knock off sort of way. The only real problem was that compared to Super Mario 64, Crash Bandicoot the game was a platformer that although fun in bursts - lacked both originality and fine-tuned controls. The sort of stuff that can make titles from even the 8-bit NES era still fun to play. 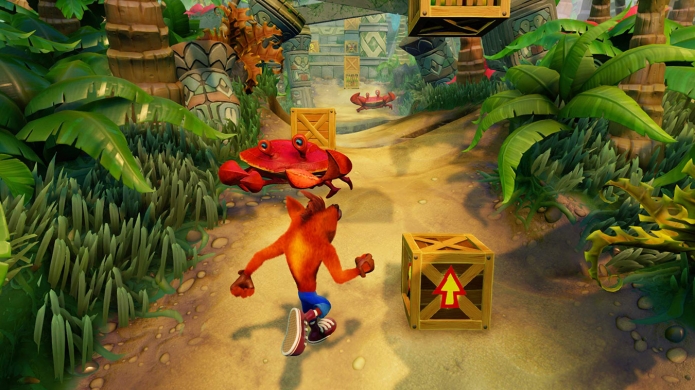 More of a technical showcase for 1996 3D graphics, it’s fitting that the Crash Bandicoot N. Sane Trilogy – which compiles remakes of the first three Naughty Dog developed Crash games – is for the most part just that. Where on a pure technical level, you get a stunning visual recreation of games that are twenty years old. A technical showcase for 2018 3D 4K-HDR graphics. Outside of revisiting a childhood or fond memories of the original PlayStation era, excluding the third game – 1998’s Crash Bandicoot: Warped – what you get is an experience that has aged poorly. Where jump mechanics and platforming feels imprecise, clunky, and simplistic. Hit-detection is suspect, and random deaths and difficulty spikes aren’t as charming as they once might have been.

Actually, that’s being generous. Let’s put it into context. Crash Bandicoot released around the same time as the Nintendo 64 and Super Mario 64, a game which offered a generational leap in platforming. Crash, the first game, offered impressive 3D visuals with limited mobility (you can jump and, err, spin) and mind numbingly repetitive level design. The same jungle location and an endless string of precise jumping make up the first half dozen levels with little in the way of surprise or variety. When it comes to the levels and presentation the nearest '90s comparison would be Donkey Kong Country on the SNES and not Super Mario 64. But even Donkey Kong Kong Country, which hasn't aged as well as you might think, had the foresight to put secret bonus levels behind destructible walls and not right there as a giant portal in a tiny claustrophobic play-area. 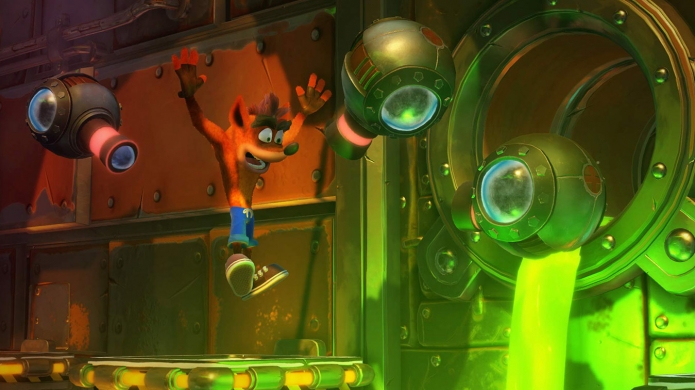 It’s telling that by the third game in the trilogy we get here, where perspective changes and variety in locations happen more regularly and frequently, Crash Bandicoot finally becomes fun. Simplistic, often uninspired, but fun. Crash Bandicoot N. Sane Trilogy lets you jump straight into the third game - which is nice.

Although touted as such back in the day and at first glance it might look the part thanks to the fresh new coat of paint, Crash Bandicoot isn’t really a 3D platformer. By shifting the traditional side-scrolling perspective to behind the character what you get instead is more like an auto-runner. The illusion of movement and exploration in a 3D space with none of the finesse. Its unearned difficulty grates more than it drives you to do better. It would be fairly easy to translate Crash Bandicoot in its entirety to mobile without having to fine tune simple touch controls. In 2018, Crash Bandicoot can still be fun – but is far from essential. A visually impressive remake full of detail and polish for what is for the most part a painfully average platformer. From a time when the genre was moving forward and delivering better traditional efforts than this.
Latest Comments
No comments currently exist. Be the first to comment!
Commenting has been locked for this item.
Follow Us
Latest Reviews
More...
News Feed
Advertisement
Latest Threads
Log In
Create Account | Lost your password?