Within half an hour of starting Child of Light, the game does something quite surprising. After wandering through the beautiful UbiArt-powered world, wrapping your head around some of the combat mechanics and engaging in some very light platforming, Child of Light takes protagonist Aurora and untethers her from the ground. Wings appear on her back and suddenly you’re able to fly anywhere: it feels like inputting a cheat code out of a magazine into an N64 game 15-odd years ago and suddenly finding yourself unrestrained by level design. It’s a thrilling hint of freedom and exploration that, sadly, the game never follows through on in any meaningful way.

Child of Light is an RPG with turn-based combat in which said combat is the only particularly exciting thing to occupy one’s self with. The skill trees don’t really allow for specialisation for each party member, there are no merchants, no job systems, no weapons to collect, and all potential buffs are fairly rote, with no way of changing a character’s fundamental style. The ‘puzzles’ outside of combat are rudimentary and immediately obvious, and the way forward is always either straight to the left or straight to the right with occasional deviations up or down. Very little is really done with the fact that Aurora can fly, and taking away movement restrictions, in an odd way, makes the game feel more constrained – you gain no other new abilities in the over world, so everything is immediately accessible, removing a lot of the wonder from exploring. Small downloadable games have really expanded over the years, but Child of Light has suffers from being oversimplified. It’s much cheaper than plenty of other RPGs, yes, but it’s also less involving. 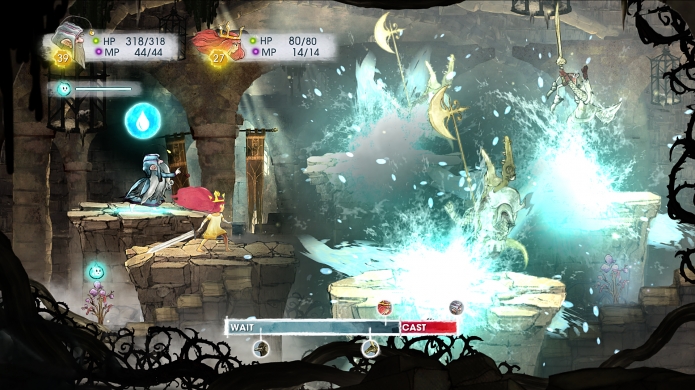 The game world ends up feeling like a thin veneer to channel you through into fight after fight, because the combat system is, by far, Child of Light’s most satisfying and fleshed-out gameplay element. You control two characters at once (more enter your party as you go, and you’re free to swap between them during a fight with no real penalty), with everything working on a neat ‘timer’ mechanic. At the bottom of the screen is a bar that each character’s portrait moves along. Once one of your fighters reaches the ‘action’ section at the end of the bar, you’re given a choice between various actions, all of which have performance times attached to them that affect how fast their portrait will move to the end of the bar. A ‘short’ action may take a second, but a ‘very long’ action will take several to perform.

The twist is that if any of your enemies attack you while you’re in this final segment of the bar, you’ll be ‘interrupted’ – you won’t get to perform the action, and your character’s portrait will be knocked back on the bar. You can do this to your opponents as well, naturally, and there’s something very satisfying about picking a ‘short’ action as you hit the bar, overtaking an enemy portrait, and stopping the big attack they were gearing up for. There are elemental strengths and weaknesses to take into account and, by the time you have five or so characters in your party, there’s quite a bit of room for strategy. Eventually you can use buffs and abilities to control the speed at which you and your opponents move up the bar, or to make your attacks uninterruptable, and you can also shine a bright light into opponent’s eyes to slow them down at any time, as long as your light meter is filled.

It’s a very clever system through and through, one that would require constant attention from the player if it weren’t for the fact that, on ‘normal’ difficulty, the combat is extremely easy until right neat the end. It wasn’t until the last few chapters that I needed to dip into my inventory of collected potions at all, and at this point the game started to pick up a bit once knowing when to attack and when to defend actually started to matter. Specialisation is limited, so everyone’s journey towards the end is going to look roughly the same, but new party members, abilities and enemies appear at a steady enough rate that you’ve often got new things to test out in combat. The fighting doesn’t quite fundamentally change across the course of the game in the way it does for some RPGs, but it’s to the game’s credit that I rarely grew bored with enemy encounters. 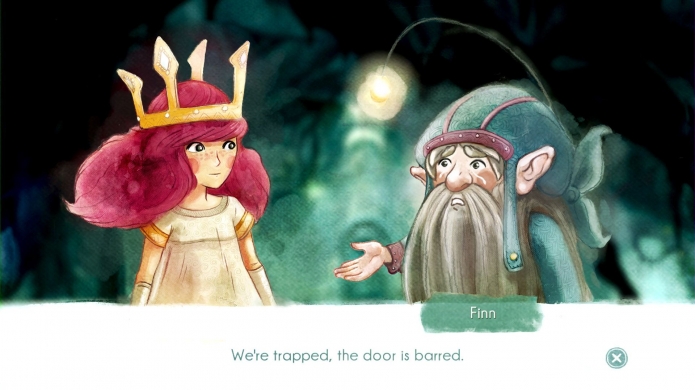 But outside of combat, there’s just not that much to do. Side quests are very simple, towns offer up no reason for exploration, and travelling off the beaten track may turn up item chests but will almost never lead to anything super exciting. The developers seem to be hoping that you’ll be too focused on the artwork to notice.

The UbiArt engine, best known for powering Rayman Origins and Legends, is reliably gorgeous. The game is absolutely beautiful, but it’s also, somehow, a little stale. While the Rayman games mixed things up with wacky designs and constant movement, Child of Light is full of very strong, but also quite generic, fantasy artwork. The creature designs are never particularly out there, and the backgrounds, while lovely, never feel unfamiliar or exciting or strange. It’s a visual style that’s easier to appreciate than to love, one that is fundamentally wonderful without ever really making a push to be memorable.

Child of Light seems to be going for a fairy-tale feeling with its art and its writing, but it never fully pulls it off. The story itself is moderately enjoyable, hitting many standard tropes we’re all familiar with from Disney’s back catalogue with decent verve, but the decision to write most of the dialog in rhyming verse, and then to not record any of it, is baffling. Most lines in the game read like the embarrassing poetry of a poor arty youth who has never actually read poetry, with very little sense of structure to it. 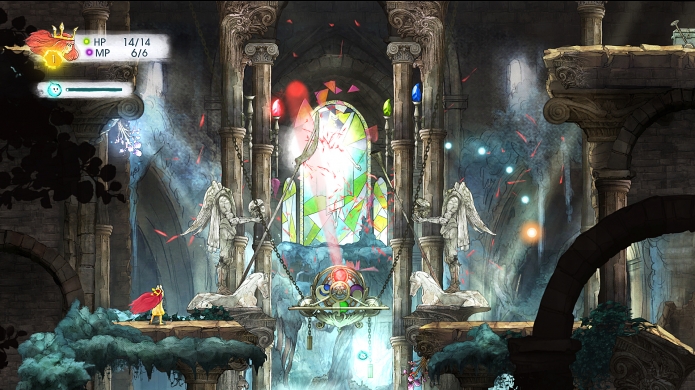 It’s difficult to read because the sense of rhythm is completely off, which may have become clear if they’d had someone read it aloud. This is a mild source of irritation through the whole game that eventually led to me becoming less invested in the characters and their plights. Like the combat, the game’s story picks up towards the end, playing with some interesting themes and going for the heart with moderate effectiveness. It never exactly turns into a great tale though, and the writing isn’t as charming as it clearly wants to be.

Child of Light, then, is a beautiful and often clever game that doesn’t seem to be aiming as high as it could be. It seems content to simply be pretty and mechanically solid, but it’s not a game one can easily get super invested in. There are the makings of a better game in here, and the combat is reliably entertaining throughout, but Child of Light never quite rises as high as its untethered protagonist.
Follow Us
Latest Reviews
More...
News Feed
Advertisement
Latest Threads
Log In
Create Account | Lost your password?