It’s that time of the year where videogame companies release their “best-selling” games for the Holiday period in a bid to claim sales glory over the year. And it just wouldn’t be the same without Call of Duty’s annual entry. Sledgehammer Games has stepped up for this year’s release, with a timeline that takes the series back to its roots in World War II showing yet again that Nazis were the bad guys and Americans were the heroes.

After what I, and many others have dubbed one of the biggest flops in the series’ long history with Infinite War (alongside Infinity’s other ‘next-gen’ entry: Ghosts), it’s safe to say I wasn’t optimistic at all for another yearly iteration, however, Sledgehammer has already proven itself with Advanced Warfare and by saving the day with their help on Modern Warfare 3. And by stripping back to the era they have, they’ve managed to re-energise the series with Call of Duty: WWII, again cementing this talented studio as one of Activision’s key cogs in the Call of Duty engine.

So, let’s start with the campaign. 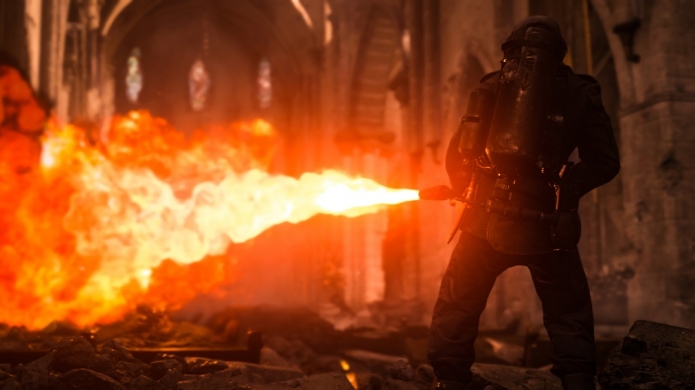 The story follows the A-typical Southern American lad who joins the war effort to naively save the world as a cockeyed American Patriot. During his tumultuous journey, he finds a group of friends and quickly forms a relationship that stands the test of time… or “blah, blah, blah, we’ve been here before”, as I was beginning to think. However, the source material explodes like a grenade of emotional realism in the face of a campaign that bucks videogame tropes in favour of a narrative befitting the actual sacrifice and gravity of World War II. It could easily have been as Jerry Bruckheimer as previous entries in the series, but as we now know with Sledgehammer and their previous work, even before Call of Duty (Dead Space, for example), these master storytellers understand pacing and narrative impact, and it absolutely shines here. And with the help of Martin Morgan, one of the foremost World War II historians who consulted, the game gives you a real sense of historical accuracy. A band of Brothers experience in a videogame.

And move into the mainstay in multiplayer.

This, honestly, is my jam. There’s nothing better than finishing a day at work or school, sitting on the couch and firing up some online multiplayer. Yep, I might be a console nub, but let’s be honest -- Call of Duty is couch multiplayer. And there’s nothing wrong with that, and this time around Sledgehammer has introduced a few context-sensitive changes to the formula to better reflect the genre and field in which they’re playing. And that was just a pun, which you’ll learn more about shortly, but let’s kick it off (did it again) with the biggest addition to this year’s Call of Duty entry: 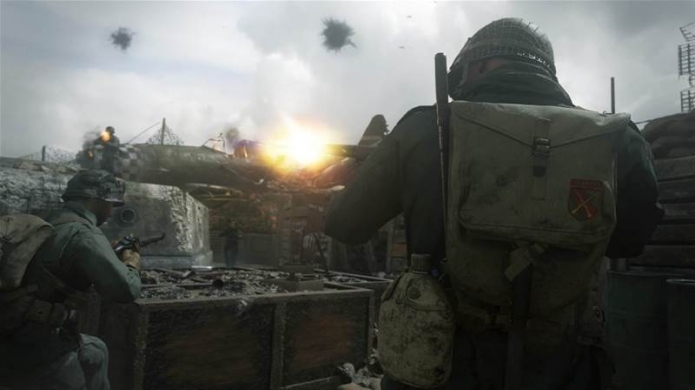 War
This is what the franchise needed. A new style of play with different objectives. The concept is simple yet brilliant. It charges players with playing on either side of the battlefield -- Allies or Nazis, and captures key moments from WWII beginning with storming the beach at Normandy (or protecting it) and expands from there in a seamless fashion that feels like it should have always been a part of the Call of Duty experience.

Playing as either the Allies storming the beach and driving the Nazis back over three different stages (each must be conquered in order to advance the level), or as the Nazis holding off those advances, War gives players an ongoing, shifting experience as part of a single session. It also proved to be insanely difficult regardless of playing on either side. In addition to having the rolling session, gameplay is centred around hardcore old-school warfare -- use ladders to breach Nazi bunkers, but at the risk of being a sitting duck. Brutal and honest is a good way to describe the experience, and it’s perfectly fitting to the source material while also standing out as fun and challenging. Oh, and speaking of fun...

Gridiron
Another new inclusion to Call of Duty: WWII comes by way of one of America’s favourite pastimes and is possibly the funnest multiplayer experience I’ve ever taken part in. The objective is similar to Capture the Flag but you can run the ball in for a “touchdown” worth six points or throw the ball for a “field goal” score of two. With the game’s insanely non COD-like large maps, you’ll have different ways to kill or be killed trying to come up trumps while attempting to score as much as you can. And there’s double overtime for really close games. 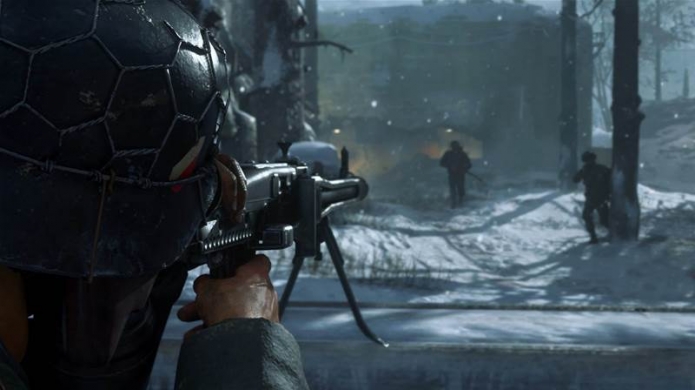 TDM or Tedium?
Despite the additions above, the game comes packaged with the burger and fries you expect in all Call of Duty outings: Team Deathmatch, Deathmatch, Domination, Capture the Flag, Headquarter and Kill Confirmed all make triumphant returns but are easily overshadowed by War. Veterans of the series who buy into the yearly release cycle will likely play the game as usual; camping Domination for KDR instead of objective-based play, but Sledgehammer would be remiss to exclude any of the modes mentioned above. Moreover, the fully customisable loadout continues its CoD tenure, alongside XP and Prestige options. What’s new and innovative amongst this, however, is the inclusion of an interactive training course, allowing players to sharpen and hone skills, while also competing for bragging rights via Leaderboards. It makes multiplayer more interesting, despite the sense that the experience has been paired back to fit better with the era in which the game is set. Honestly, Sledgehammer has done a fantastic job of making less feel like more, while adding more, and making it feel less. If you get what I mean?

Zombies
Speaking of mean, they’re back. And it’s clear the team who brought you Dead Space -- possibly one of the best new survival-horror IPs in the past decade -- are happily back behind the horror design wheel. This Zombies is a little different from the norm. There’s no gameplay centred around desperate attempts to board up windows and level openings as this takes place on a massive open map that goes deep underground. The zombies come in waves and you can still kite them around to a point, but the game will kickstart the next wave once an objective is complete. Adding huge amounts of tension to what is already a pretty desperate game mode.

You’ll need to conserve your ammo as ‘Jolts’ don’t come as freely as you might like (‘Jolts’ being in-game Zombies currency), but this also adds to the intensity of it all. You’ll have a shovel (WWII issue) at first with enough Jolts to buy a weapon, while the mode continues its co-op history allowing up to four players to ward off the undead at once. It feels more like this Zombies requires better team tactics and communication though, elevating it above other Zombies entries in the series. And this is amplified by the larger play-spaces and incremental changes to overall challenge. The look and feel remains the same with the likes of Doctor Who’s David Tennant joining a great cast of characters who help carry the mode into realms almost screaming out for expanded standalone release, but as part of the overall Call of Duty: WWII package, it helps diversify what you’re getting for that premium price buy-in. 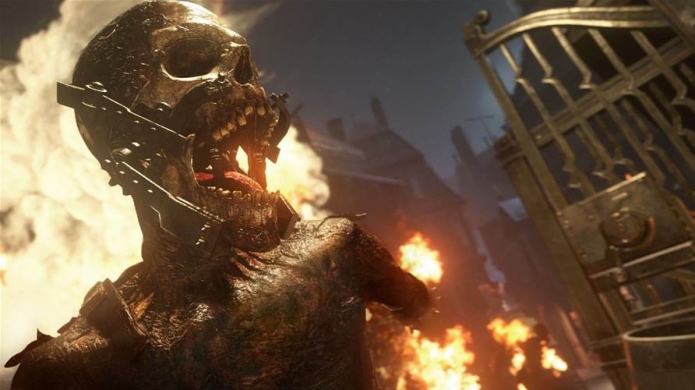 Once More into the Breach
Overall, the game is great. There’s very few things to pick at, really. Yes, it’s another Call of Duty game with very similar online options, but the additions that are new here help expand on a series that does tend to over-deliver at the worst of times, let alone the best. Yes, there’s no 64-player multiplayer, and it’s run-and-gun, but that’s CoD’s niche, and when done as well as this, it’s an awesome niche. Gameplay is solid, while the historical side of the game shines with fantastic references and a story that, while fictional, plays brilliantly to the conflict upon which it’s based. The audio is arguably the best the series has seen with noticeable changes for footsteps across different surfaces, among much more standing out. And on a visual level -- on PS4 at least (my review platform) -- it’s a shining light after the mess that was Infinite War. It might be a step into the past, but graphically it’s a leap into the future.

Yes, it’s another Call of Duty, but it’s a Call of Duty by a rock-solid team who care about quality and stamping themselves as a premier Triple-A developer in a very crowded space. Another great Holiday release to add to your (likely) growing pile.